Early internet investors cut their teeth on FAANG, and now the backers of cloud computing are seeing values climb with MT SAAS, a new basket of top public technology companies.

Since 2013, investors have tracked FAANG stocks after Mad Money’s Jim Cramer coined the term—and for good reason. The FAANG behemoths have been “totally dominant in their markets,” effectively serving as the “blue chip” tech stocks and a proxy for the technology category more broadly.

Facebook, Amazon, Apple, Netflix, and Google all benefited from the dual macro trends around the internet and mobile adoption of the last two decades. Investors who bet on this trend were also rewarded handsomely as the FAANG stocks have outperformed all the major market indices with a staggering 24x return since 2010 and a 14x return since the FAANG term was popularized in 2013. 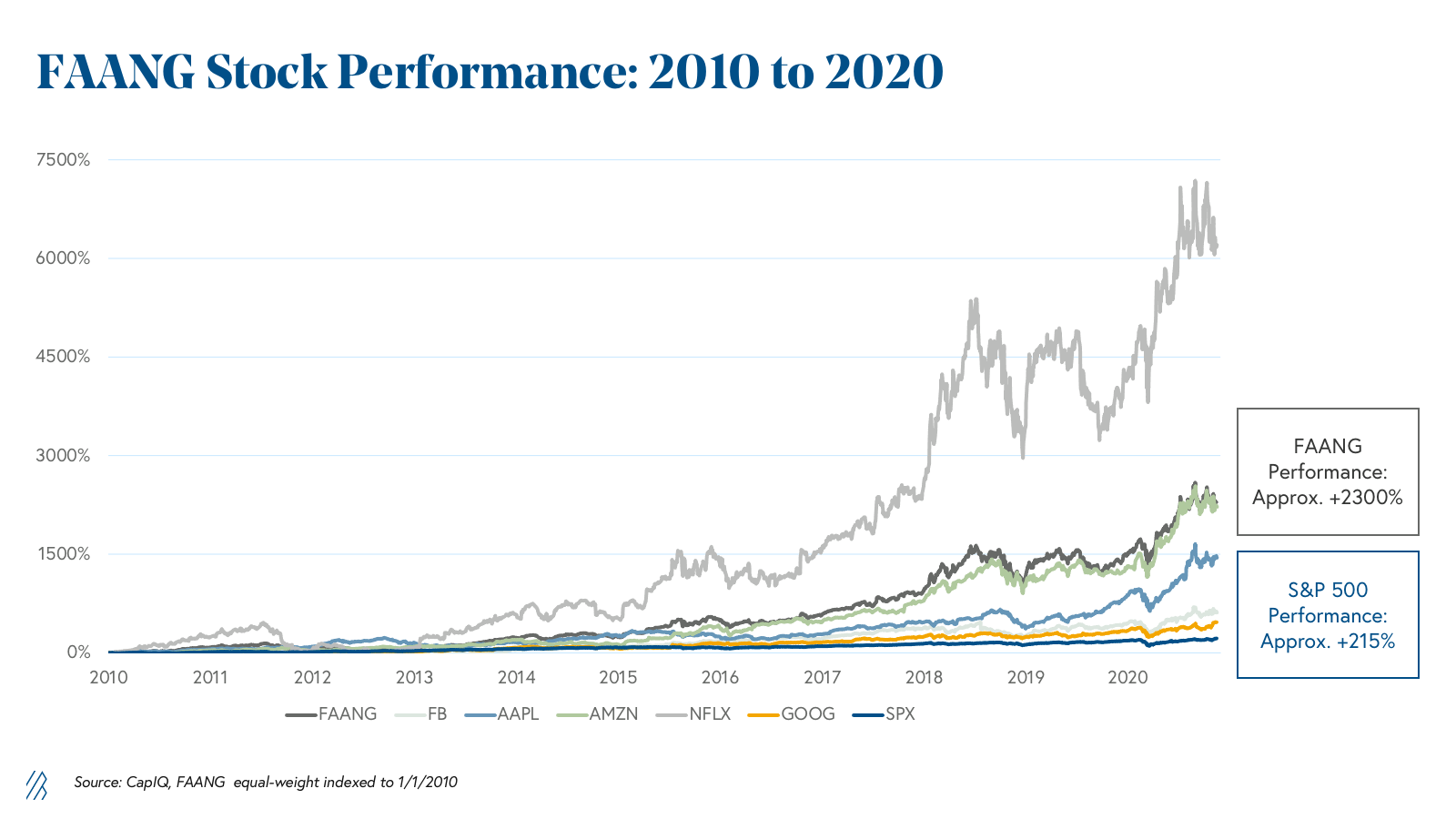 While the FAANG stocks will continue to have their place in the market, it’s becoming increasingly clear that their best growth years are behind them as internet penetration reaches a saturation point in North America and analyst forecasts are becoming increasingly more conservative for the years ahead. Collectively this suggests that the glory years of massive FAANG stock outperformance might also be approaching a natural end.

The technology industry constantly reinvents itself and its total share of global GDP only continues to grow at spectacular rates. So what will take the place of FAANG? What is the next mega-trend that has been as influential as the internet and mobile technology, and capable of producing the next basket of market leaders with “FAANG-like” potential?

Technology is increasingly driving global GDP and software is the fastest growing segment of technology. Within software, the growth of cloud is moving at an impressive clip; it’s becoming abundantly clear that cloud computing will become a majority of enterprise software by 2025, and the vast majority of all software by 2030. Simply put, cloud computing is increasingly consuming software, hardware, and services and is therefore the most exciting mega-trend in technology, making it one of the most compelling themes impacting global GDP over the coming years.

The Bessemer-Nasdaq Emerging Cloud Index (EMCLOUD) serves as a benchmark for the public cloud software market, and is up 10x since 2013 with a staggering 37% compound annual return.* 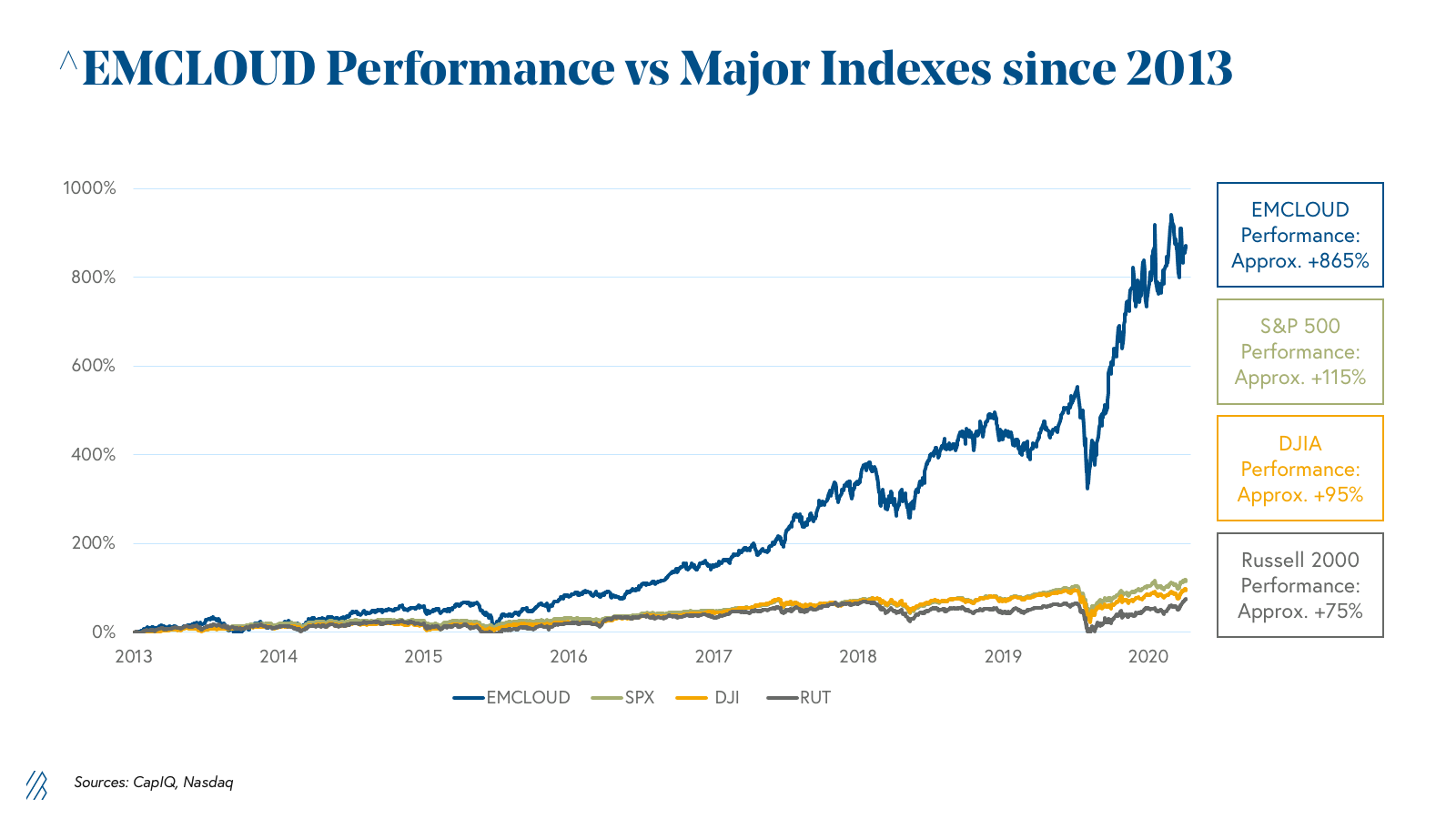 Even within this high performing basket of market disruptors, the companies leading the pack in this race of market performance are starting to emerge. We believe that more than a dozen companies within this elite public basket will become long term market leaders; however, four are top contenders—Salesforce, Adobe, Shopify, and Twilio.

Microsoft and Amazon are the two additional companies to follow within the broader tech industry considering both how quickly they’ve embraced cloud computing and how fundamental cloud is to their growth strategy. From 2019 to 2020, Azure grew more than 50% year over year, and AWS, the leading provider in cloud services, grew more than 30% year over year, per Statista. With these numbers in mind, we expect to see parent companies Microsoft and Amazon drive a majority of market capitalization from their cloud businesses in the coming years.

Therefore, at Bessemer, we think it’s time to supplement FAANG as the go-to measure and basket of the top public technology stocks and introduce a regrouping of formidable stocks that captures the high performance of the technology industry in a cloud-first world: MT SAAS (Microsoft, Twilio, Salesforce, Amazon, Adobe, and Shopify). 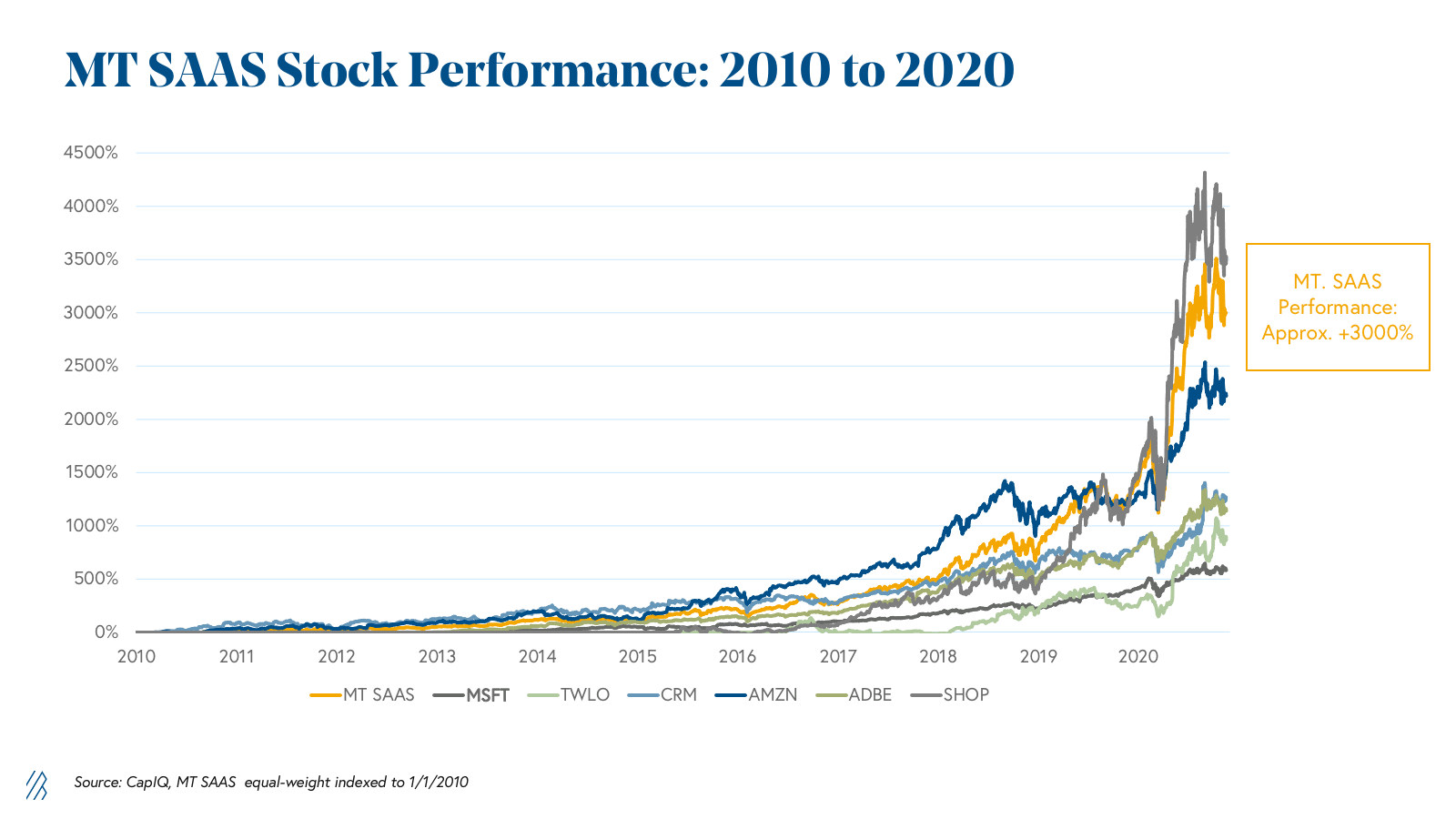 There’s a material outperformance over both the short and long term, when you compare the performance of the MT SAAS stocks versus the FAANG stocks.

Over the last four years** FAANG has posted an impressive 330% total return and a 39% annualized IRR, but well short of the 803% total and 65% annualized IRR of the MT SAAS basket. 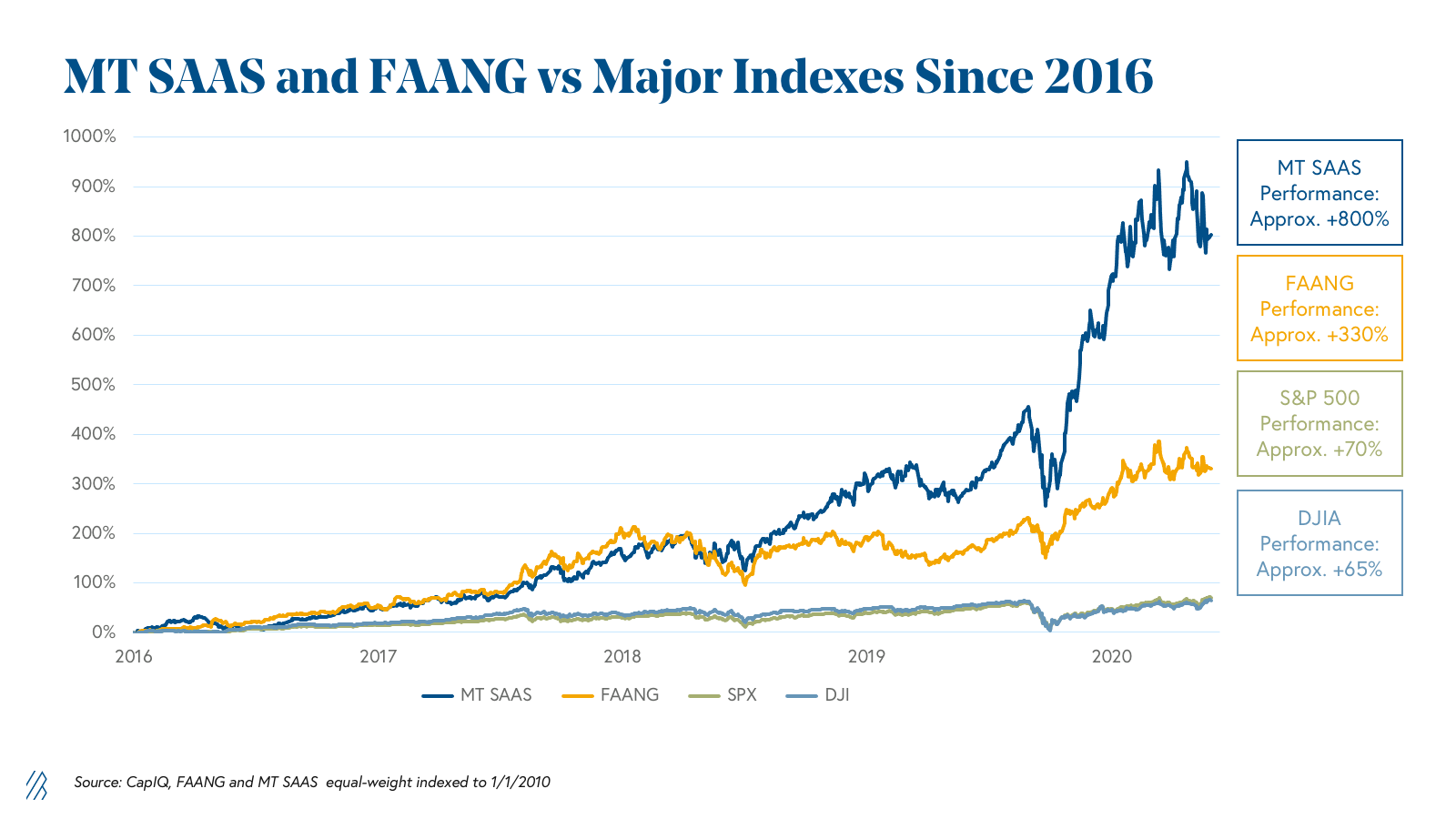 When you extend the time series to the past five years, the outperformance of MT SAAS is even more pronounced. FAANG generated a 305% total return and 33% annualized IRR, but well short of the 886% total return and 60% annualized IRR of the MT SAAS basket. Note that Shopify (IPO 2015) and Twilio (IPO 2016) were included in the calculations only once public, but their impact on the appreciation of the index would only be more pronounced if including the stock price expansion from the private to public financings.

Here is the data in a more formal one, three, five, and 10-year view: 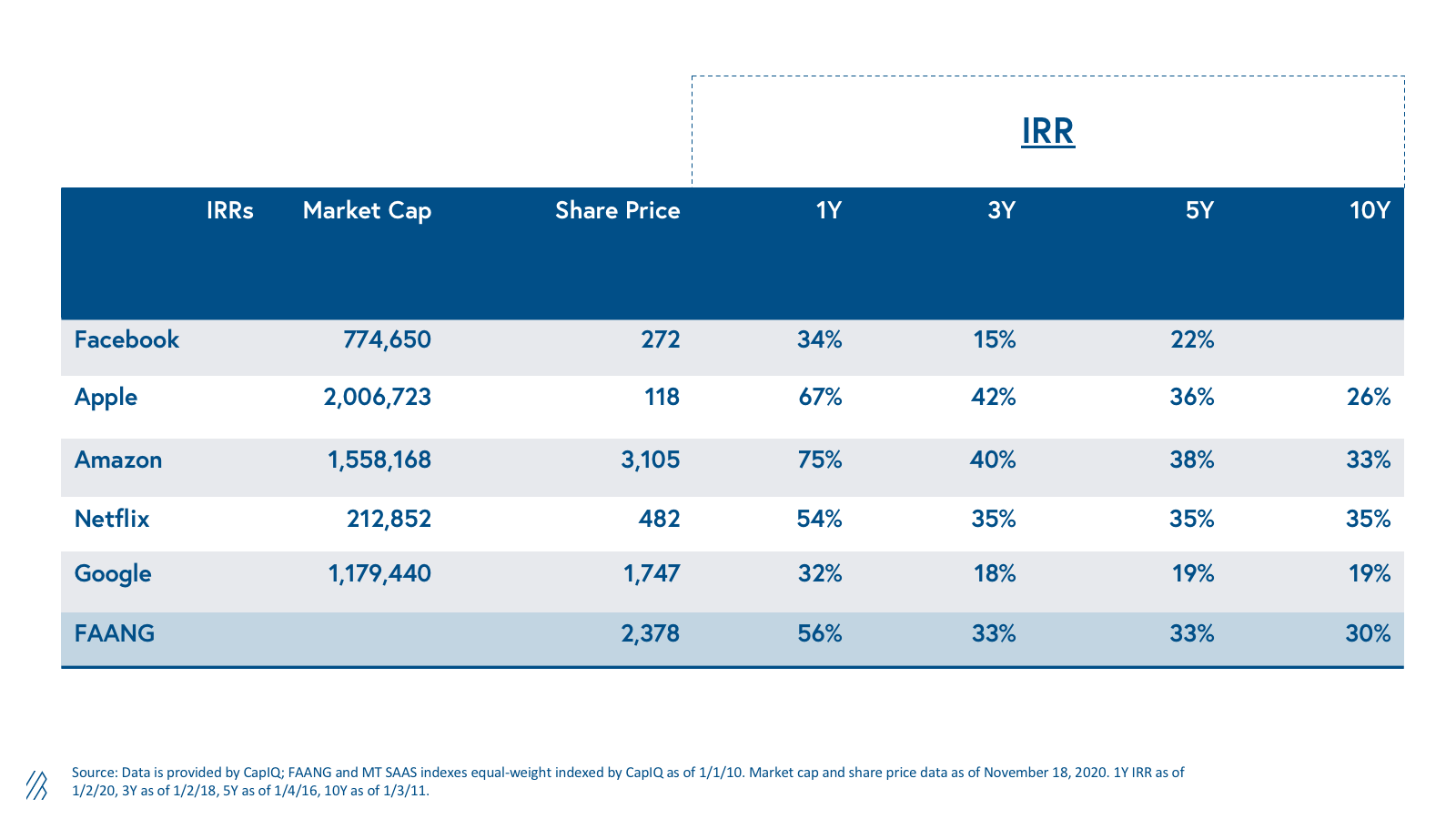 The successful run of the internet, mobile, and cloud computing sectors naturally begs questions around market sizes, future growth rates, and appropriate multiples. Whereas multiples are always hard to predict at any point in time, analyst consensus estimates suggest that the MT SAAS basket on average should be able to maintain significant growth rates and positive cash flow levels. 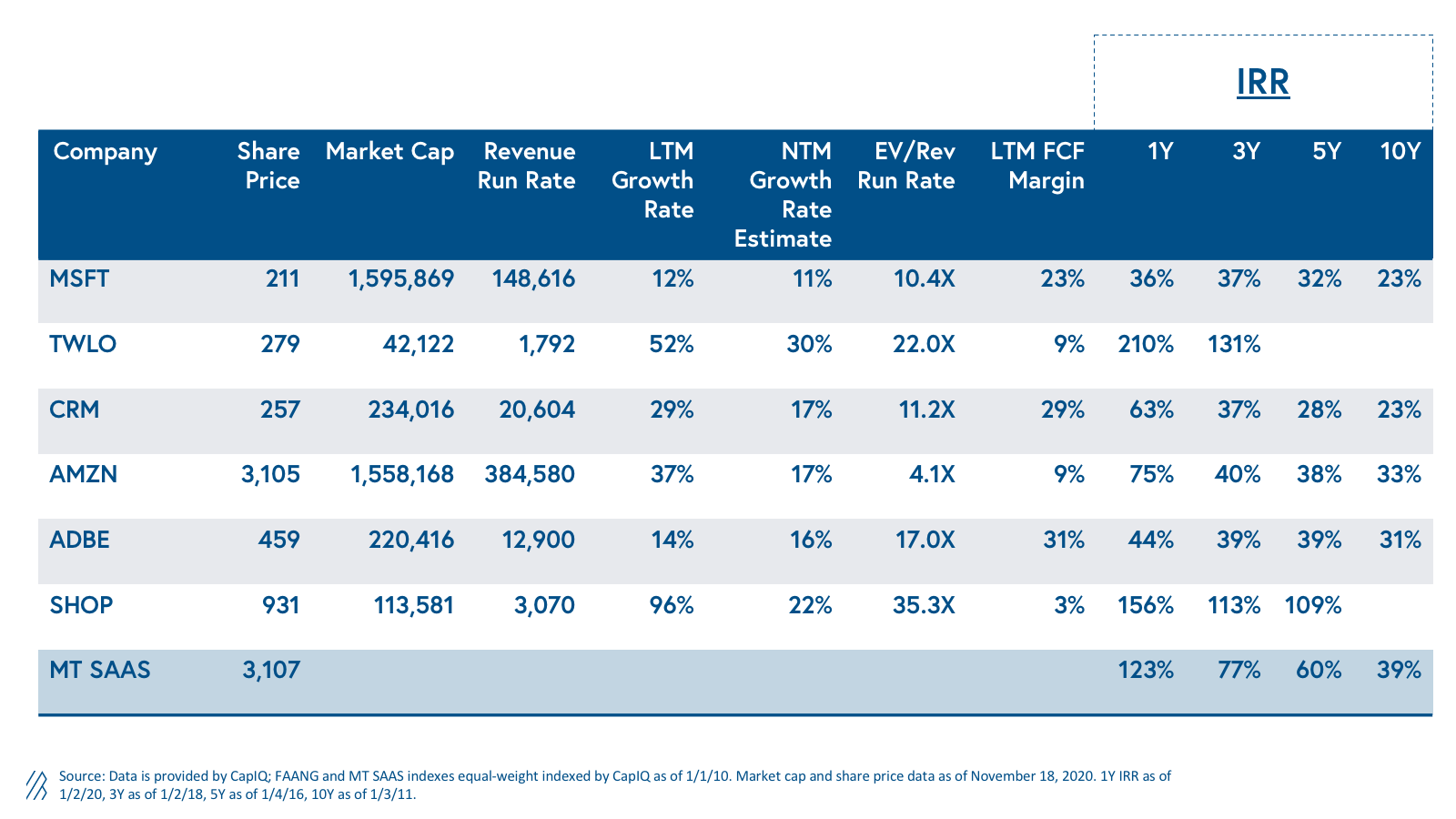 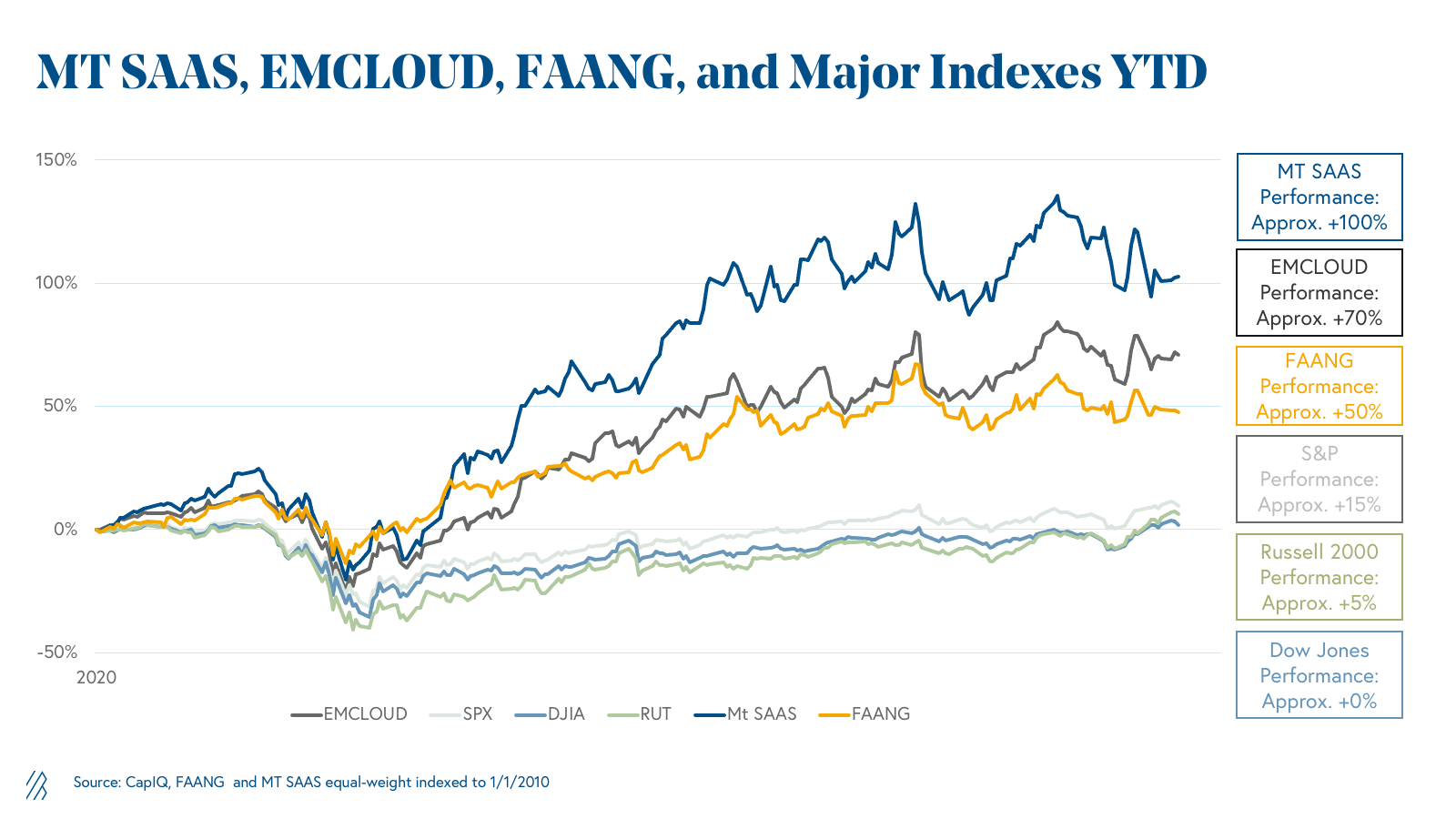 We have witnessed two immense technology trends in the last 30 years, with the dual internet and mobile tidal waves propelling the FAANG companies to massive heights. We are now witnessing the start of the third major recent technology dislocation and the events of 2020 have only served to accelerate and cement the global transition to cloud computing. We see tomorrow’s most promising source of growth in technology to be defined by the MT SAAS basket: Microsoft, Twilio, Salesforce, Adobe, Amazon, and Shopify.

* The Bessemer-Nasdaq Emerging Cloud Index (^EMCLOUD) is a trackable but non-tradeable index jointly provided by Bessemer Venture Partners and Nasdaq. The WisdomTree Cloud Computing Fund (^WCLD) is an independent and tradable Exchange Traded Fund managed by WisdomTree that licenses the ^EMCLOUD data set.

\*\*Note that this is the maximum comparable period between Mt. SaaS and FAANG (including all 10 companies) given Twilio went public on June 23, 2016.

Disclaimer: This article represents the opinions of Bessemer Venture Partners (“BVP”) and is for informational purposes only. You should not treat any opinion expressed by BVP as a specific inducement to make an investment in any security, but only as an expression of BVP’s opinions. BVP’s statements and opinions are subject to change without notice. BVP is not registered as an investment adviser under the Investment Advisers Act of 1940, as amended (the “Advisers Act”), and relies upon the “publishers’ exclusion” from the definition of investment adviser under Section 202(a)(11) of the Advisers Act. As such, the information contained in this article does not take into account any particular investment objectives, financial situation or needs and is not intended to be, and should not be construed in any manner whatsoever as, personalized investment advice. The information in this article is provided for informational and discussion purposes only and is not intended to be, and shall not be regarded or construed as, a recommendation for a transaction or investment or financial, tax, investment or other advice of any kind by BVP. You should determine on your own whether you agree with the information contained in this article. Certain of the securities referenced in this article may currently, or from time to time, be constituents of ^EMCLOUD, which has been licensed for a fee to ^WCLD. In addition, certain officers or employees of BVP or funds or other persons or entities affiliated or associated with BVP may hold shares of, be officers or directors of, or otherwise be associated with some or all of the issuers of the securities referenced in this article or included in such index. BVP expressly disclaims all liability with respect to any act or omission taken based on, and makes no warranty or representation regarding, any of the information included in this article.

Roadmap: Enabling entrepreneurship in the creator economy
The Rise of Cloud in Europe
Ten lessons from a decade of vertical software investing