Bessemer identifies a new business metric for cloud companies that serves as an indicator of company returns.

Silicon Valley, and its many Twitter handles, celebrates financings as milestones. Unicorn valuations at 10-100x ARR multiples capture headlines while announcements of customers added and products launched often do not, leading to a flawed dynamic in which companies seek market validation by raising capital. The data, however, shows that CEOs are better served by only raising capital if and when that capital can generate a meaningful return, which often means not raising money.

Throughout Bessemer’s history of investing in cloud computing, we’ve recommended that companies track their business’ progress using the five C’s of cloud finance. Here at Bessemer, we also use these metrics as internal guideposts when evaluating the performance of prospective, later-stage investments. After months of analyzing the data from the portfolio companies we have funded, we’ve identified the Cash Conversion Score as a new metric that is a signal for future success.

Bessemer’s Cash Conversion Score equals a company’s current ARR divided by the total equity and debt capital raised to date net of current cash (i.e., equity and debt minus the cash on the balance sheet). 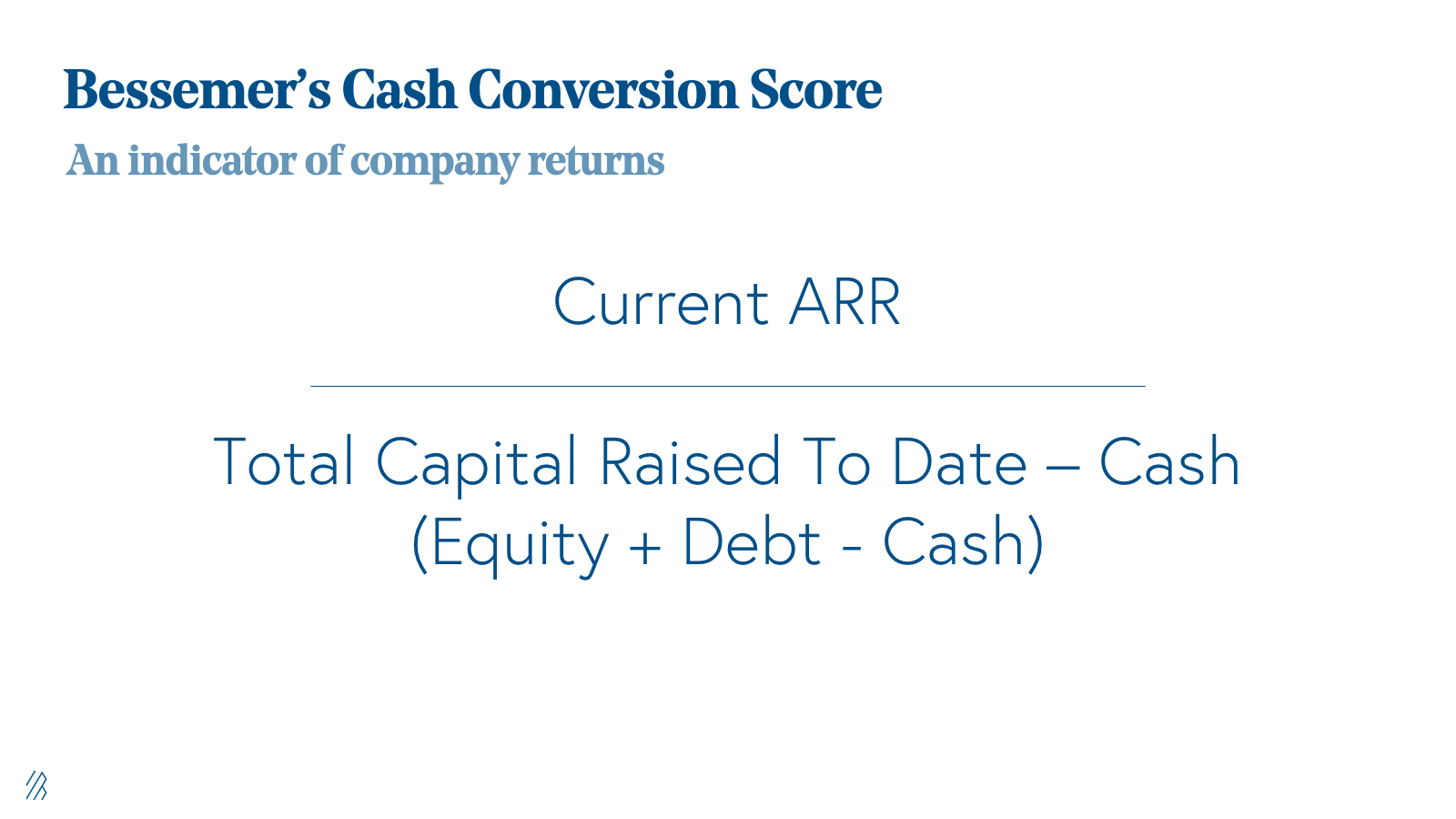 Within the Bessemer portfolio, a financing in a cloud company that had a Cash Conversion Score higher than 1.0x yielded an average internal rate of return (IRR) of 120%, which is 2x higher than the average IRR for a company with a CCS <1.0x. 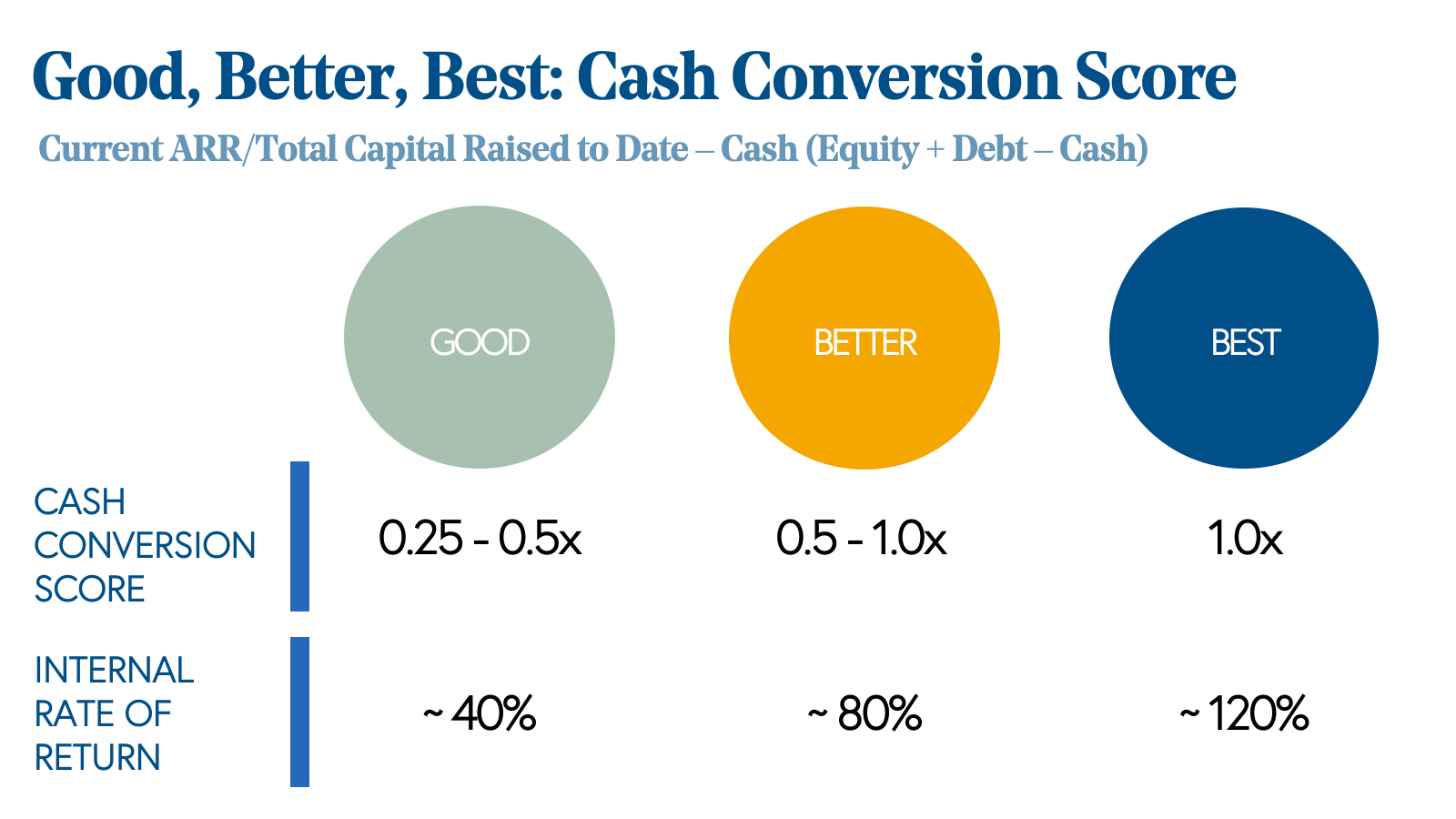 We realize that some might take this data to imply that raising incremental capital is bad, but that is not the takeaway at all. The median public cloud company raised $160MM to get to a ~$100MM revenue scale, with some companies having raised up to $750MM; it takes financing to build a market-leading company. Instead, the takeaway is that the great companies can use the capital raised to catalyze growth. They built their fantastic Cash Conversion Scores not by starving themselves of capital but rather through growing revenue alongside their capital base.

Great companies can use the capital raised to catalyze growth.

For example, assuming that the average cloud company gets a 10x revenue multiple, the one dollar of revenue multiplied by the 10x multiple equals $10 of enterprise value. Every dollar put into the company is getting a 10x return. Similarly, a company with a 0.1x CCS would only return the capital invested.

To bring the numbers to life, the internal rate of returns for 0.1x-1.0x Cash Conversion Scores are shown below, assuming a constant 10x exit multiple and five-year hold on an investment. 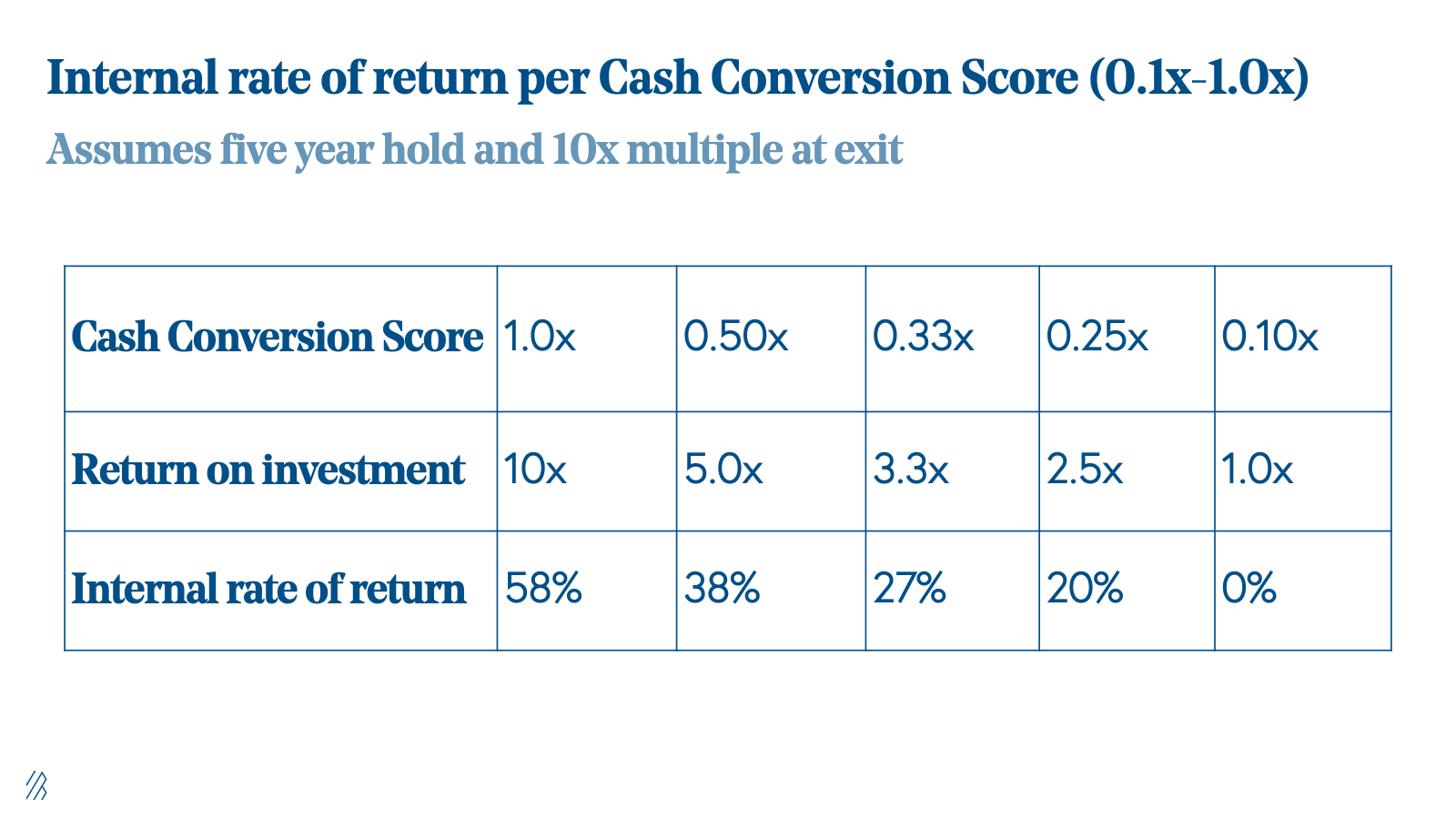 ROI is not driven by Cash Conversion Score directly, but CCS indicates multi-year trends in a couple of incredibly important things, including product-market fit and a scalable sales and marketing organization.

Let’s use one of our most successful companies, Twilio, as an example. Leading into the April 2015 Series E, Twilio had ended 2014 with ~$90MM of revenue on only ~$110MM of capital raised, with ~$30MM on the balance sheet, or a Cash Conversion Score of 1.1x. The Series E was priced at $1 billion post-money, and just a year later, the company went public and closed its first day of trading with a market cap of $2.4 billion. Today it is worth almost $15 billion.

Let’s look at PagerDuty as another example. The company ended 2016 with ~$60MM of ARR growing ~65% YoY and a 40% efficiency score, which were strong metrics but not best-in-class at that scale. Its Cash Conversion Score, however, was phenomenal. PagerDuty had raised only ~$45MM to reach that scale and with ~$10MM in cash, and had a Cash Conversion Score of 1.7x.

Neither revenue growth nor efficiency score would have indicated to an investor that the next round in the company, PagerDuty’s 2017 Series C at $750MM, would generate a ~90% IRR at its IPO close only 2 years later. It closed its first day of trading at $2.8 billion. The reality, though, was that PagerDuty’s software had great product-market fit within the DevOps space, and the sales organization was running well. Money invested was generating a meaningful return.

By looking at the Cash Conversion Score in concert with other metrics, we can see the full picture of a company’s health.

The Cash Conversion Score reinforces critical lesson for founders and CEOs: raise money only when it will drive returns. The milestone to celebrate is not achieving that unicorn valuation in a capital raise—it is growing into the ARR that justifies it.

What’s your Cash Conversion Score? If you’re interested in discussing this new metric with us, please reach out! You can email us both, Mary and Jeff, at mdonofrio@bvp.com and jeff@bvp.com.