What are DeSci applications?

How will DeSci potentially impact humanity?

Three leaders at the helm of the nascent decentralized science (DeSci) movement explain the fundamentals and how web3 is enabling “a Cambrian explosion of unconventional science.”

The field of science is one of the most consequential for humanity–our understanding of it determines our health, our well-being, and the condition of our planet. But numerous scientists are feeling frustrated that such an important institution is mired in bureaucracy and antiquated traditions. This widespread feeling is the reason that many scientists have begun to envision a better way, one where any qualified scientist can access funding, execute research, and be fairly compensated for their contributions.

Decentralized science, or DeSci, is still a very nascent field, and one that still mystifies many. In DeSci 101, we’ll explain what it is, how the movement is reimagining the scientific community, and the potential benefits for humanity. We spoke with three of the foremost experts to better understand this emerging category: Niklas Rindtorff, founder of LabDAO; Tyler Golato, co-founder and Chief Scientific Officer of Molecule; and Alok Tayi, founder and CEO of Vibe Bio.

What is DeSci and how did it first emerge? 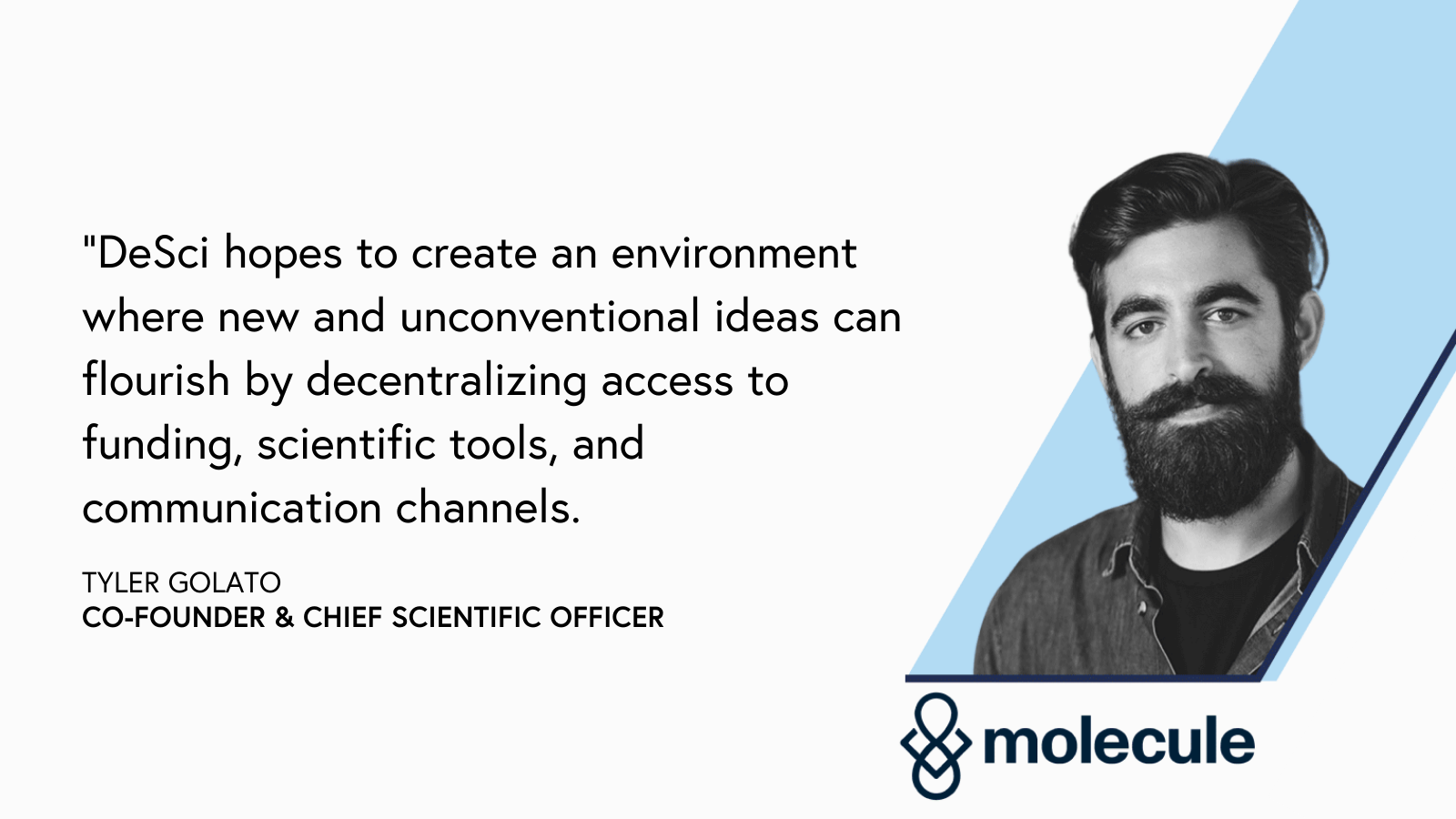 Tyler: According to the Ethereum Foundation, DeSci is decentralized science, “a movement that aims to build public infrastructure for funding, creating, reviewing, crediting, storing, and disseminating scientific knowledge fairly and equitably using the web3 stack.” DeSci works off the idea that scientific knowledge should be accessible to everyone and that the process of scientific research should be transparent. DeSci makes science more resistant to censorship and control by central authorities. DeSci hopes to create an environment where new and unconventional ideas can flourish by decentralizing access to funding, scientific tools, and communication channels.

Niklas: Given the diversity of projects in this space, there is not one single origin story for DeSci. The ETHDenver 2022 conference was the first time a large group of projects in the space came together for a full day event. The movement is still young.

Alok: The best science or medicines sometimes never receive funding. Not because the idea is bad, but because traditional systems optimize for different metrics: prestige (academia), lowest risk (biotech), or influence (government). This stronghold determines a scientist’s work or a patient’s fate, rather than the research merit itself. DeSci aims to empower these very communities to develop medicines and technologies that are potentially life-saving or transformative. The DeSci movement is part of a broader recognition that revolutionary platforms are developed by non-traditional thinkers. 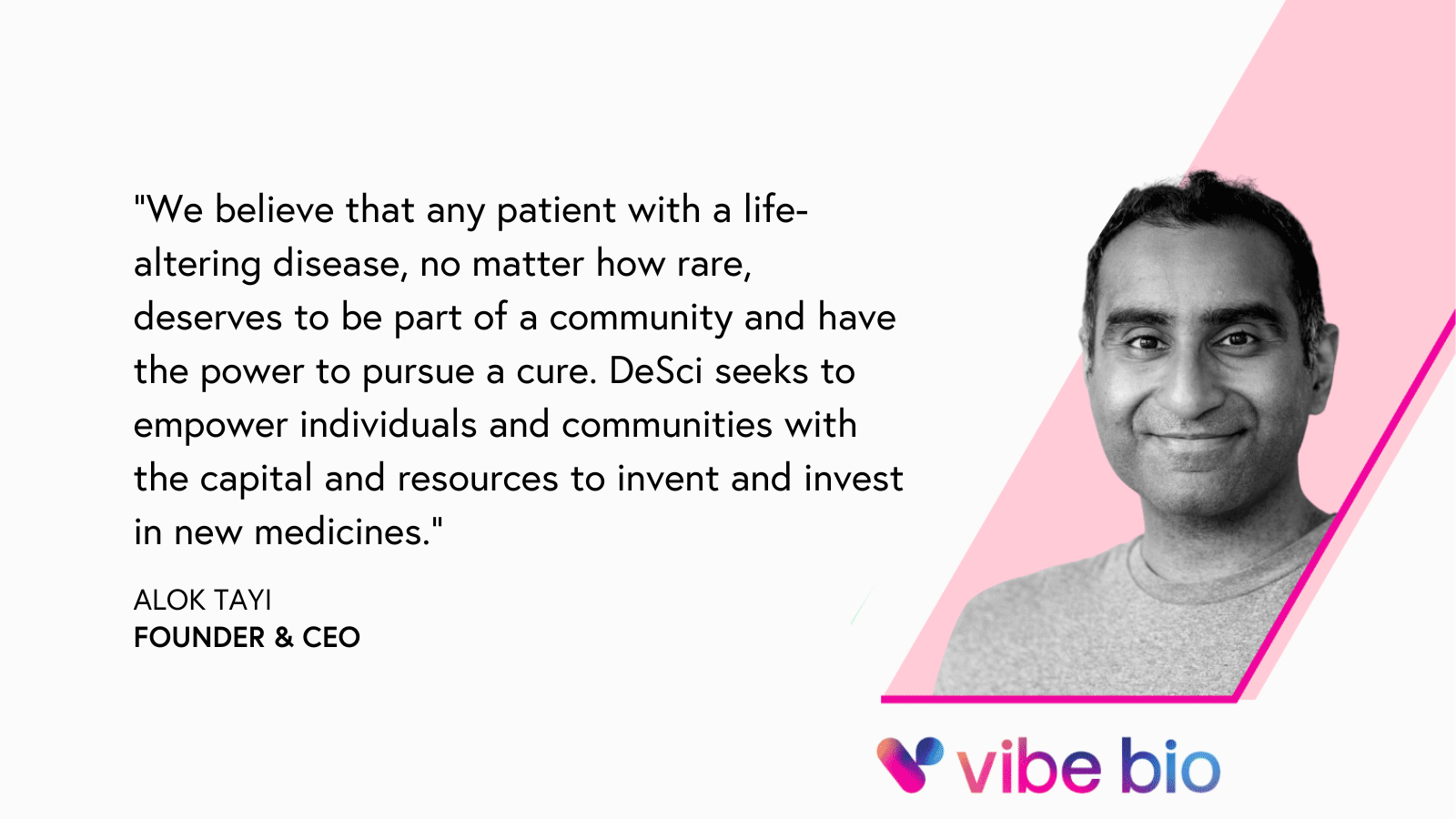 Alok: We believe that any patient with a life-altering disease, no matter how rare, deserves to be part of a community and have the power to pursue a cure. DeSci seeks to empower individuals and communities with the capital and resources to invent and invest in new medicines. DeSci practices are providing patients and scientists with unprecedented ownership over the process of allocating capital and collaboration: groups can fund high-impact projects, align incentives between builders, funders, and customers, and provide trust in use of funds through a public ledger.

Tyler: In the traditional scientific community, centralized groups control how grants are made and funds are distributed. In DeSci, distribution of funds is determined by communities, or the public using mechanisms such as quadratic donations or decentralized autonomous organizations (DAOs). You can collaborate with peers globally, rather than being restricted to your university. Funding decisions and governance happens transparently on-chain, and data is openly shared and published. New models are emerging that take advantage of web3 primitives to make publishing more trustless (that is, a system where you don’t have to trust a third party) and transparent, while ensuring universal access.

Niklas: So far, DeSci has still a lot to prove. Besides gaining a new funding source, the everyday life of most scientists has not changed. At LabDAO we develop infrastructure that makes it easier for scientists to work in global, independent teams once they have raised their funding online. We want the complete scientific process to happen online eventually—once funded, you purchase laboratory services, pay for compute infrastructure, and support your globally distributed team.

What are some examples of how DeSci can be applied?

Niklas: The scientific process can be segmented into three core activities: raising funding for a scientific project, executing the proposed project, and distributing the results. There are projects in decentralized science focusing on each of these three steps.

Tyler: There is core intellectual property ownership infrastructure, funding DAOs (such as VitaDAO for longevity or PsyDAO for psychedelics), as well as execution DAOs that enable scientific collaboration globally, such as LabDAO.

Alok: Bringing together all the human and financial capital needed to drive drug development programs is a huge challenge that DeSci is uniquely suited to help solve. For example, at Vibe Bio we are building a community of patients, scientists, and partners to identify promising treatments for overlooked diseases and fund their development through cryptocurrency token sales. Additionally, data DAOs are another use case. They allow individual patients or institutions to put their records on the blockchain, provision access to others (e.g. biopharma companies) while maintaining patient privacy, and be compensated for their data’s use.

Tyler: There is a lot of hype in the space, and a lot of movement from traditional players. Pfizer, for example, recently made a proposal to invest in VitaDAO. While all of this attention is great, we need to make sure that we don’t make the same mistakes as the incumbent system and work diligently to preserve the values of the space.

We also need to work to onboard larger academic communities from diverse backgrounds. Technology and tech-savviness is a barrier to entry for those that are not accustomed to web3, and ensuring that we have great tools to make it easy to interact with web3 is fundamentally important.

Finally, DeSci is very young. There are many first time founders with vague and unproven theses, and a scientific community focused on idealism as opposed to product market fit. This energy is great, but we need balance to succeed.

Alok: Mainstream adoption of web3 tools into the day-to-day activities of scientists is necessary for DeSci to thrive, and limited awareness within traditional settings gets in the way of making rapid progress. We believe part of the solution to this problem is to formulate education for the existing scientific & biotech community. We need to ensure we meet the highest standards of science, recruit and retain the best scientists, and provide the most transparent data via an experience that is user friendly and accessible to everyone. Sustainability is another concern.

Niklas: Today DeSci still has not reached a lot of scientists, mostly because there is still a lot of work ahead for builders in this space and the available funding is limited. For example, The National Center for Advancing Translational Science (NCATS), a part of the NIH (National Institutes of Health) focused on moving translational science into the clinic, has an annual budget of over $800 million USD this year alone. In contrast, the amount of funding we have seen for translational biomedical research in web3 overall so far is in the $2 million USD range.

What potential does DeSci have to change scientific exploration and impact humanity? 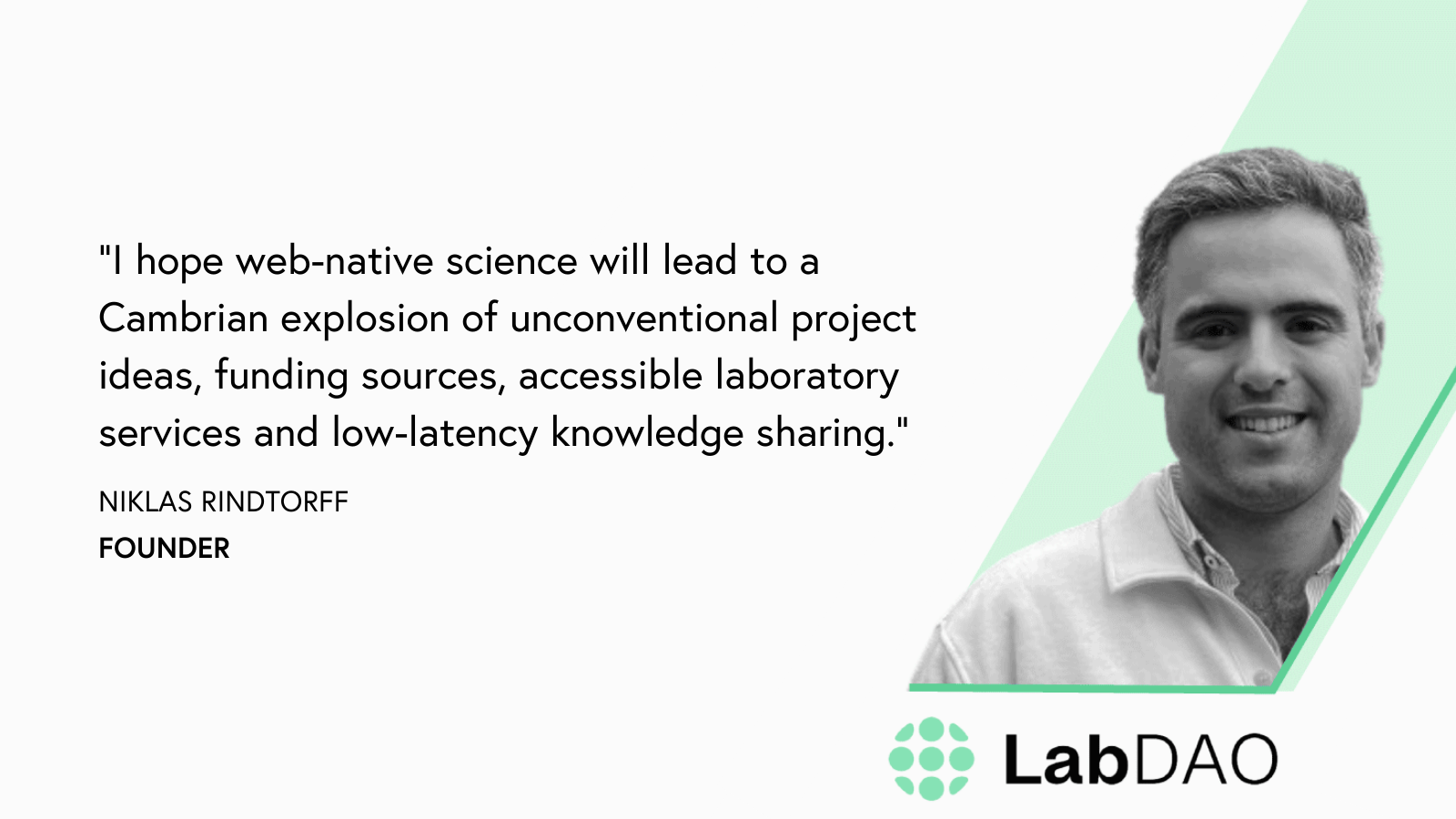 Tyler: There are five fundamental promises of DeSci:

Alok: Every patient with a life-altering disease—no matter how rare it is—should feel a part of a community with the power to pursue their cure. But too many patients and scientists feel abandoned because the treatments they need are considered too costly and too risky for traditional biotech funding. DeSci solves this.

“Our vision is for patients, not profits or politics, to drive drug discovery.”

Vibe Bio is building a community of patients, scientists, and partners to identify promising treatments for overlooked disorders and fund their development through cryptocurrency token sales. The biggest obstacle to developing potential treatments isn’t finding them—it’s funding them. Our vision is for patients—not profits or politics—to drive drug discovery so that nobody will have to forge the path to a treatment alone.

Niklas: DeSci is web-native science. The same way that the web has increased the variety of content and goods that can be consumed, I hope web-native science will lead to a Cambrian explosion of unconventional project ideas, funding sources, accessible laboratory services and low-latency knowledge sharing.

I think the same way that the web in its current form allowed young talented artists to become popular through platforms like TikTok, YouTube and art NFTs, this upcoming chapter will make it easier for young brilliant scientists and inventors to be discovered.

Bonus! If you want to learn more about DeSci, listen to our Ask Me Anything between Niklas Rindtorff of LabDAO and Morgan Cheatham from one of our Steel DAO (fka BessemerDAO) events.