The Cloud Industry Update for 2020

Bessemer Venture Partners has one of the largest cloud portfolios in venture capital, and for the past two decades we’ve invested in the emerging technology, business models, and founders of the cloud that have gone on to revolutionize both horizontal and vertical industries. For the fifth year in a row, we’re excited to partner with Salesforce Ventures and Forbes, a leader in technology and venture capital journalism, to celebrate the industry’s success and recognize the leaders who are shaping the cloud-first world we’re living in today.

The bar is raised every year to qualify for The Cloud 100. The competition is steep as there are not just hundreds but thousands of private cloud companies. 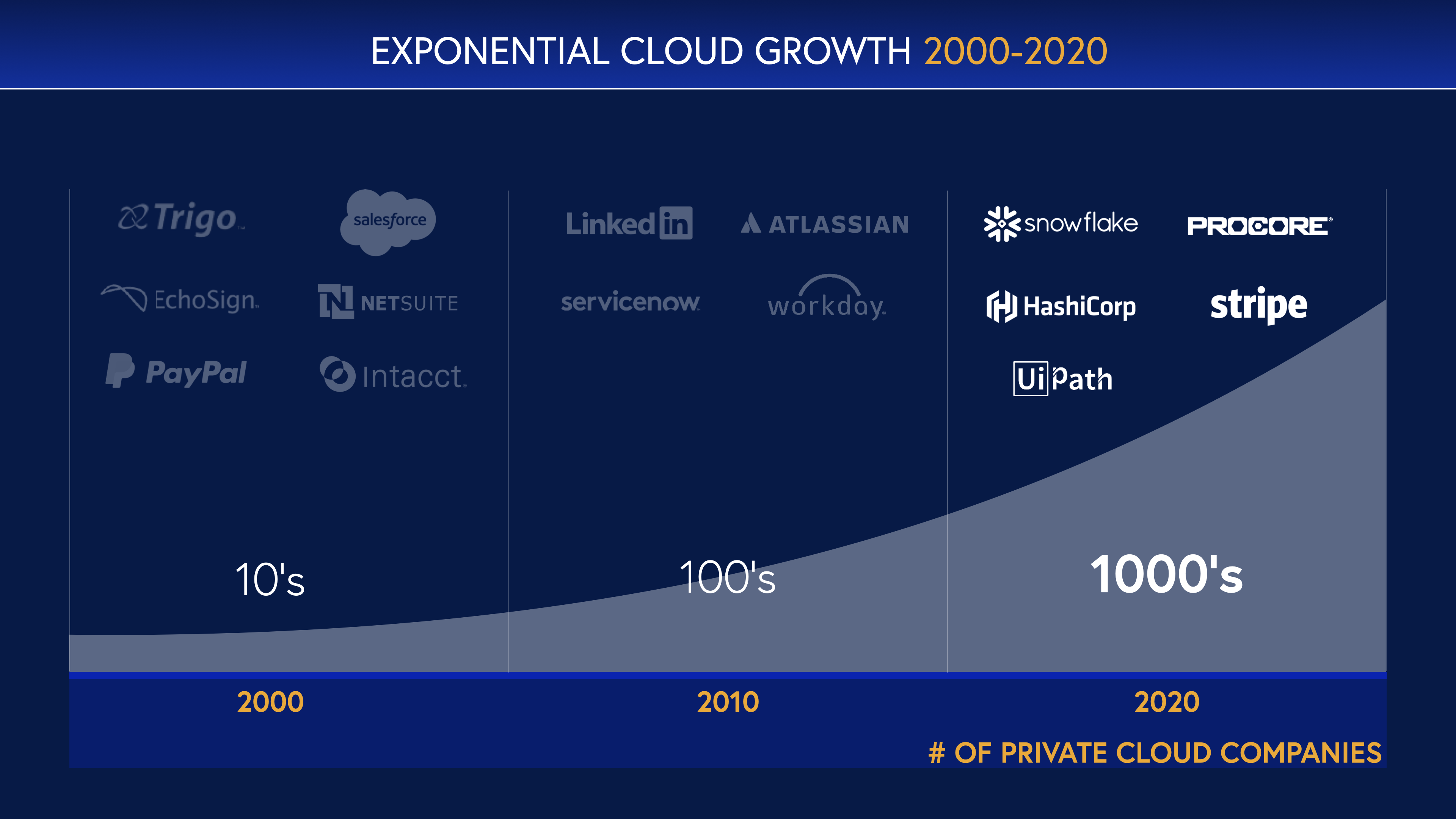 Whereas 10 years ago there was only 1 cloud company valued at more than $1 billion, the number of private cloud unicorns has grown at accelerated rates for the past decade! In many ways, reaching and crossing the billion dollar valuation threshold has become a standard milestone for many of our leading cloud companies today.

It’s an understatement to say that this year has been unprecedented and momentous for cloud businesses, as a global pandemic altered our public health systems, communities, and how we all depend on technology.

But before we dive into explaining where we think the cloud is headed, we have to take a few steps back to give a full picture of the industry, the journey up until now, and the significance of how powerful the cloud model has become.

Just 10 years ago, the entire market capitalization of the public cloud industry totaled just under $40 billion. 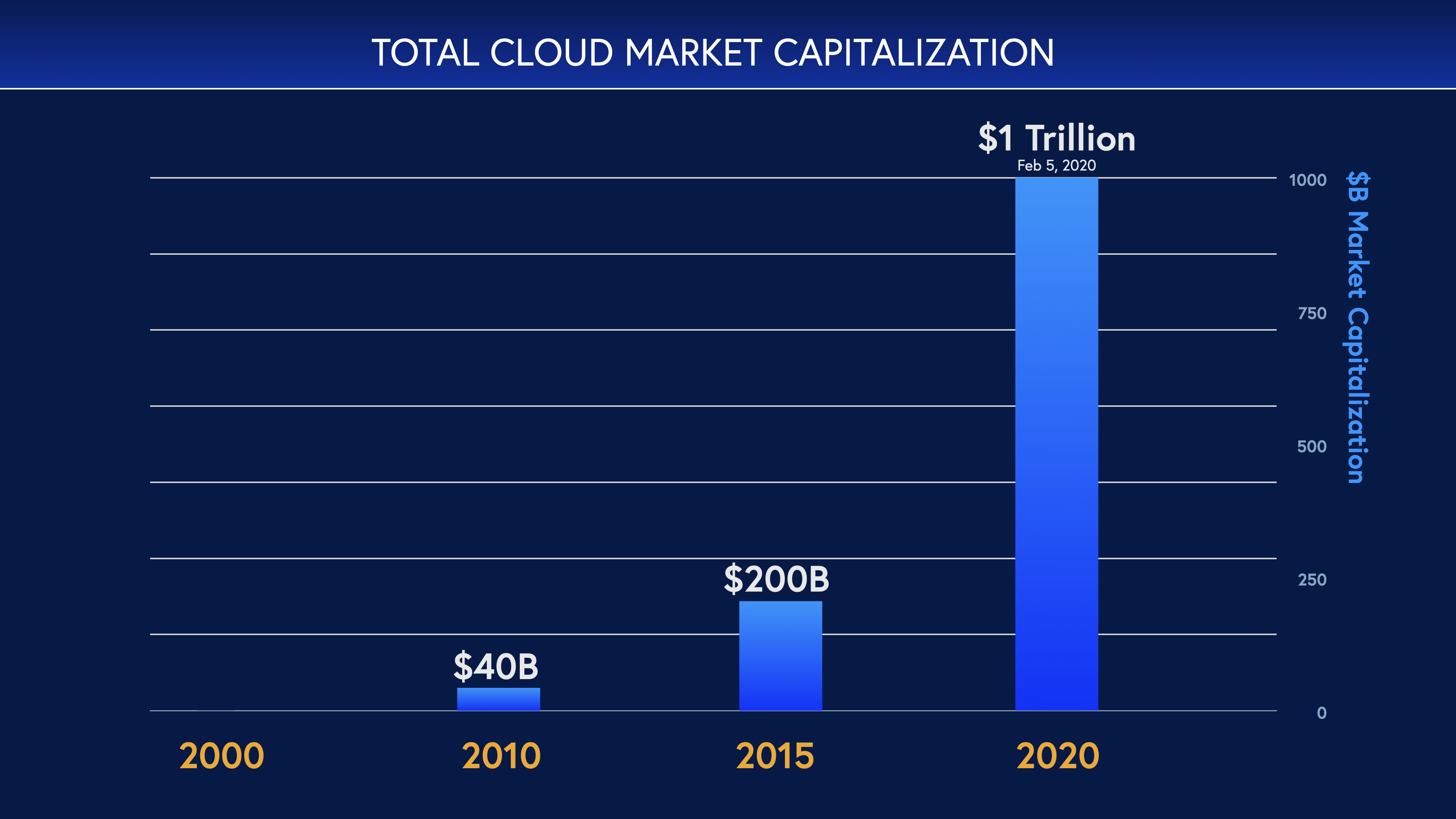 Five years later, that scaled up 6x, but still totaled just a bit over $200 billion. At the start of the year, the public cloud market hit a milestone we’ve been waiting for — finally, on February 5, 2020, we surpassed the $1 trillion market capitalization, with a 45% growth rate. 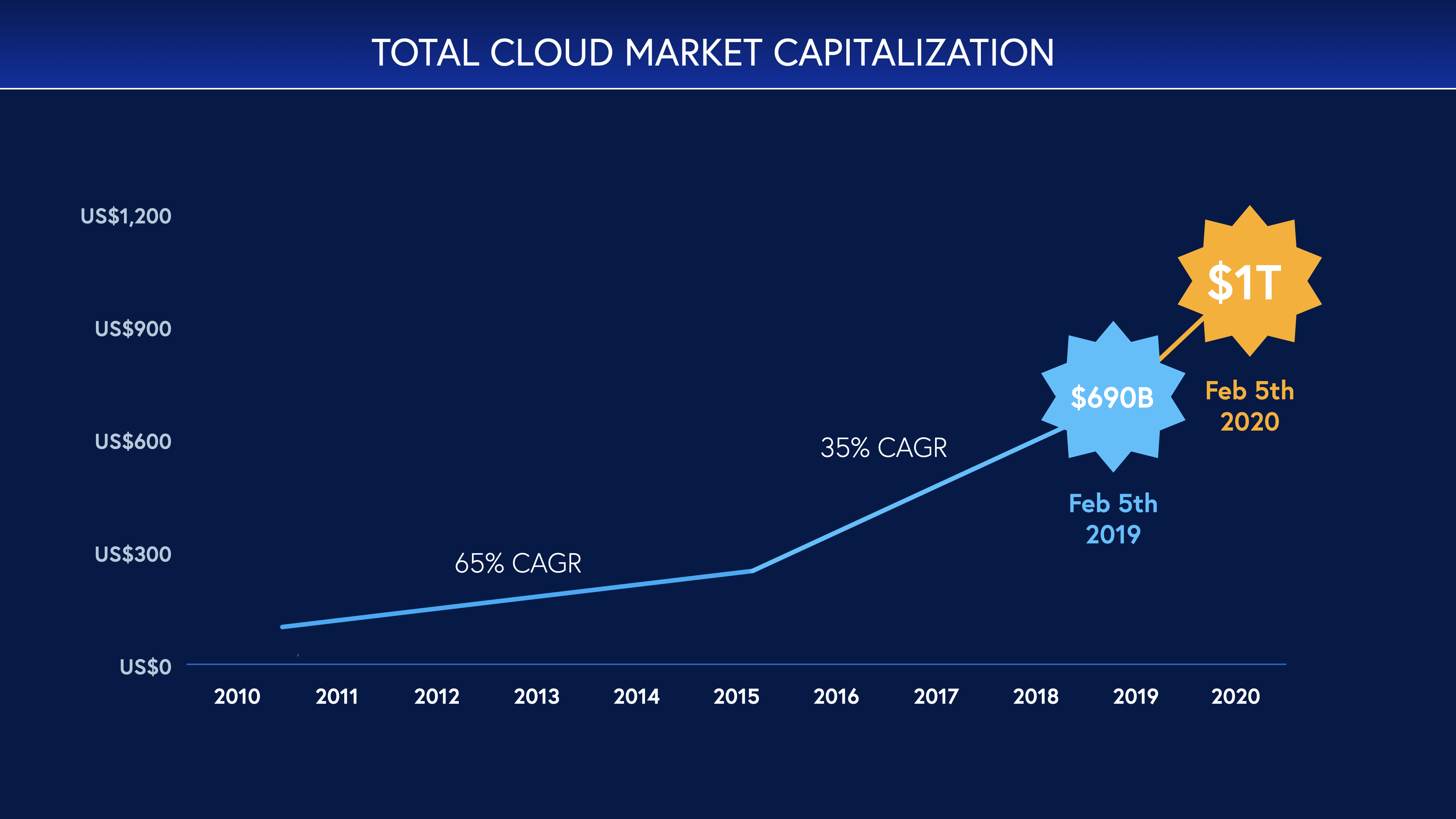 But little did we know what was around the corner. Just a few days after hitting that trillion-dollar milestone, COVID-19 tore through our global communities and economies. 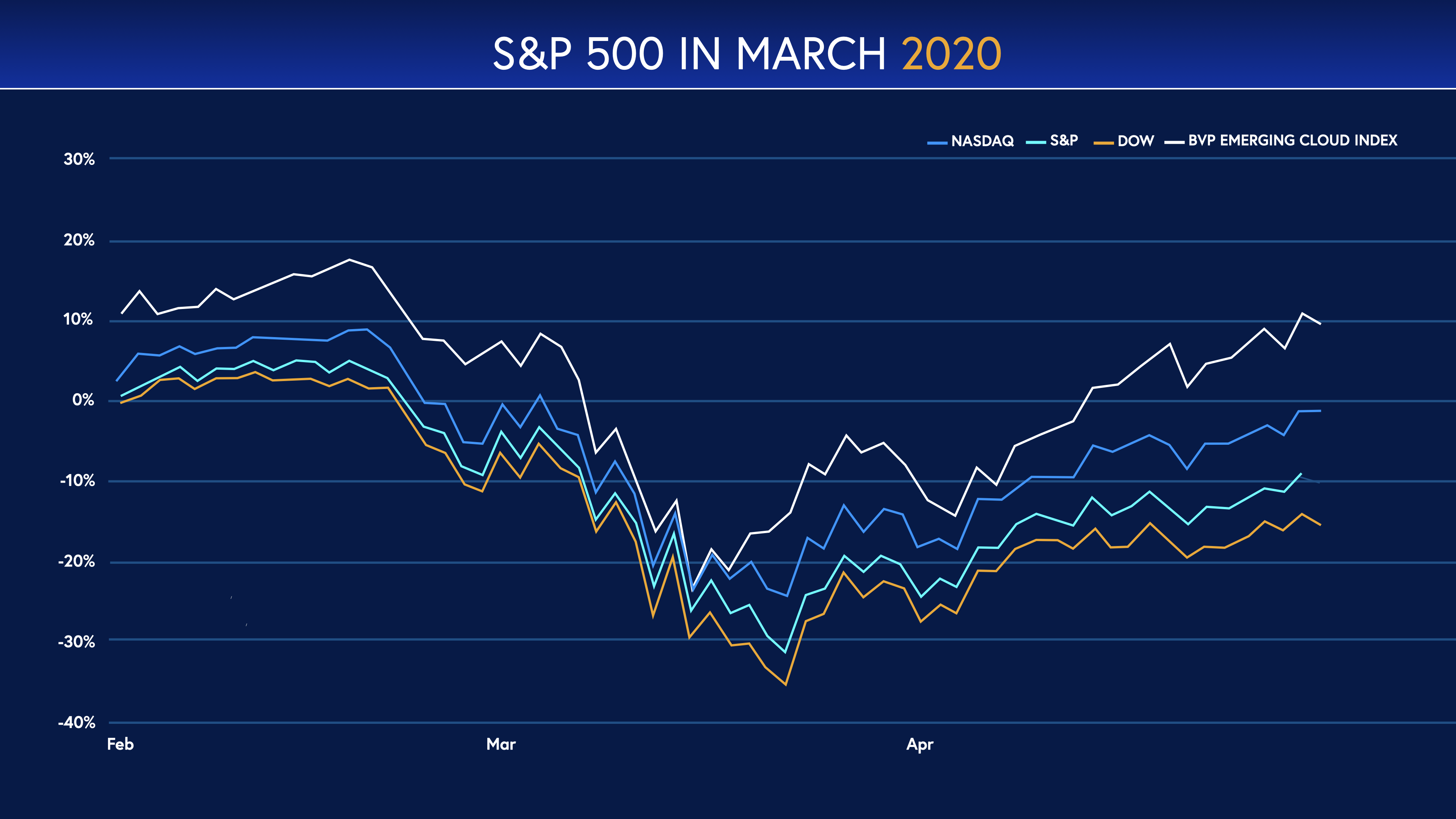 In March, we saw the major indices each drop more than 30% over the course of three weeks, and The BVP Nasdaq Emerging Cloud Index tumbled along with it.

Those were some particularly painful weeks, as we witnessed the impact of this public health crisis and the markets become more volatile than we’ve seen in our lifetimes.

But then some powerful things in technology started happening. As the world was forced to leave their offices, and stores, and schools, they turned to cloud technologies.

The business and life-saving powers of the cloud

When nearly the entire restaurant and hospitality industry had to shut down due to shelter in place orders, Toast, the all-in-one restaurant management platform, turned on a dime and built new solutions to manage online ordering, contactless delivery, and other solutions to help during these uncertain times. For example, an Italian restaurant in Connecticut increased their monthly take out volume by 1600% by relying on Toast’s technology.

And how could we even fathom living through times of a socially distanced world without Zoom? The video communications platform has defined an era — giving us the connectivity and the ability to communicate with our colleagues, friends and family. Zoom has facilitated virtual schooling, helped governments organize, and even helped us all during some of life’s most precious and sacred moments — whether that’s birthday celebrations, weddings, and in some cases even our last goodbyes.

But the same needs existed with physical products as well. As storefronts were forced to close, all over the globe, many small business owners suddenly opened online storefronts to survive. In one month alone, between mid March and mid April, hundreds of thousands of business owners turned to Shopify to open their first online stores. There are more than 1,000,000 Shopify stores today and the usage continues to grow for business owners around the global.

And although the global health crisis remains, cloud companies like these and all of you, are working harder than ever to keep the economy moving to get through this.

And this is reflected in cloud growth, adoption, and financials. 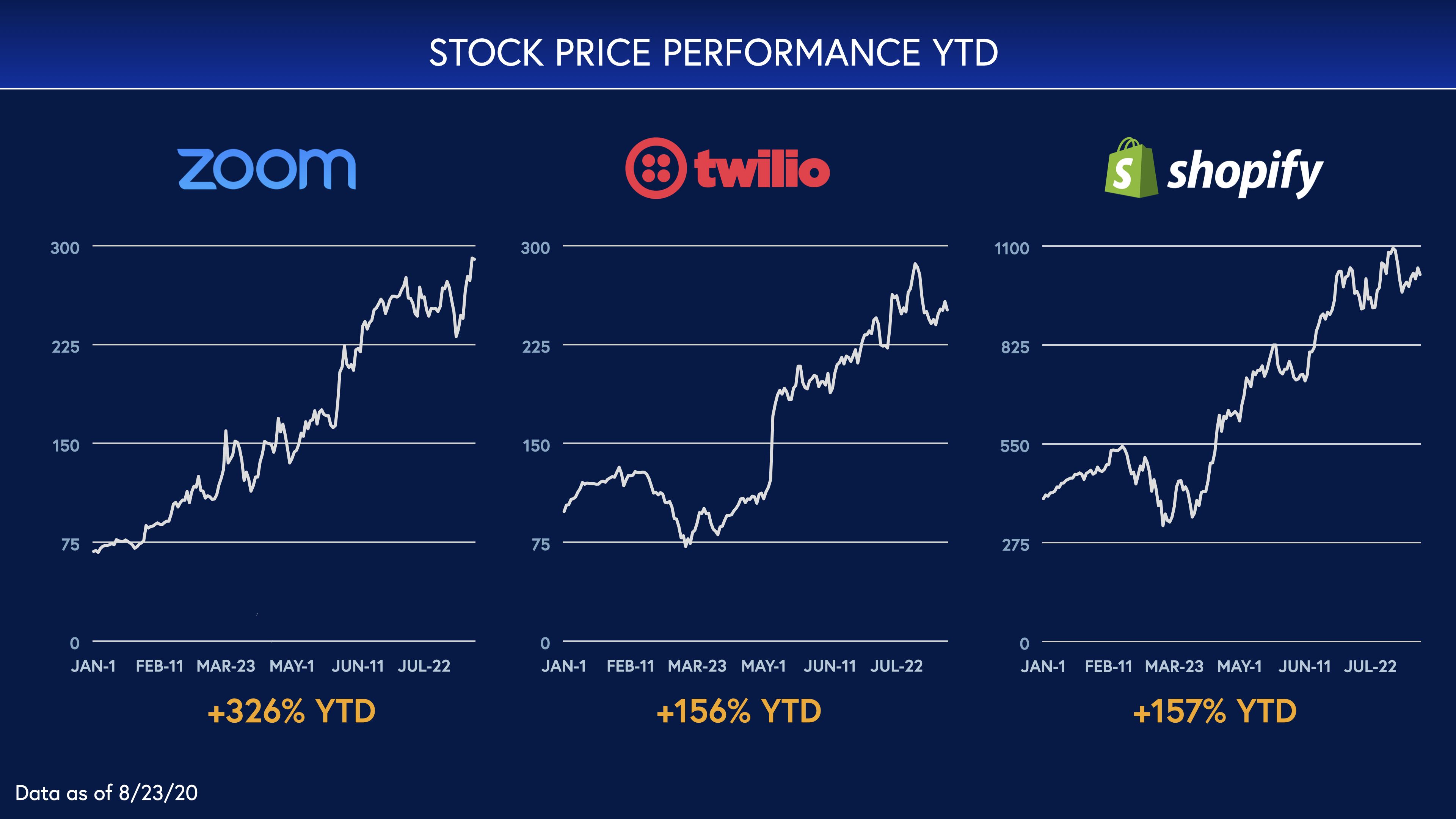 Companies across industries had to quickly accelerate their digital transformations, lock in their virtual and remote working environments, and as a result, cloud technology and its delivery system rebounded. Companies like Zoom, Twilio, and Shopify have grown significantly in the last months in response to this demand. 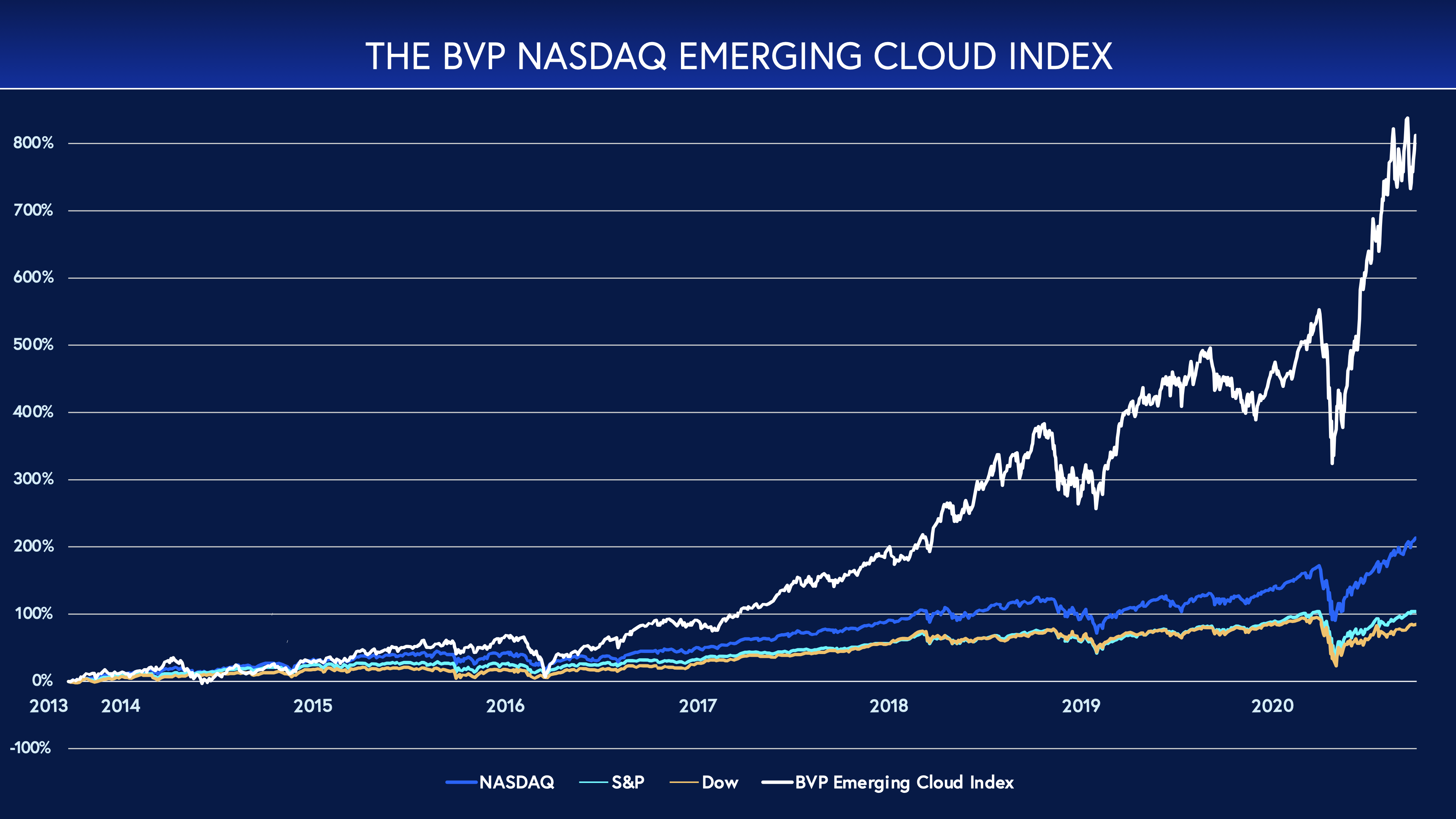 And in aggregate, public cloud markets have pulled away from all the major indices, and the Bessemer BVP NASDAQ Emerging Cloud Index powered well past a trillion and a half this summer. But you know that the compounding power of cloud has been building for 20 years, and this is the most powerful force in all of technology right now. We know where the industry is headed. 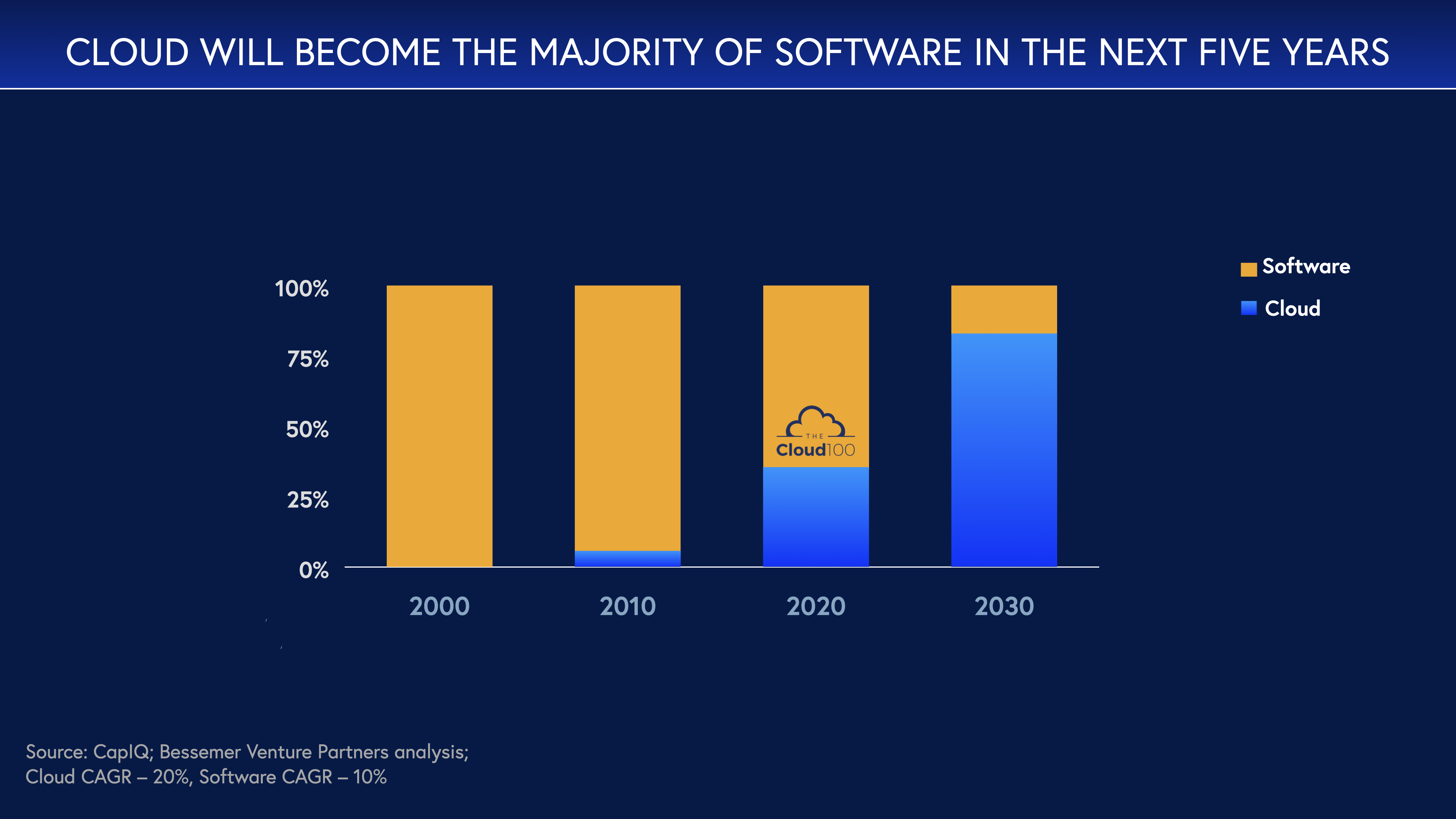 In addition to the dozens of public cloud companies, there are literally thousands of private cloud companies out there who will be the flag bearers in the future.

The significance of making The Cloud 100

It’s clear that we’re officially living in a cloud-first world – and the horizon for cloud founders, today and tomorrow, is quite auspicious. As the definitive ranking of the top 100 private cloud companies in the world, Cloud 100 businesses also serve as an industry benchmark and measure the strength of the private cloud market.

While we’ve analyzed these top companies for over five years (2016-2020), for the first time, we’ve openly shared the key insights we’ve gleaned from the performance metrics in and trends in 2020 in order to reveal what underpins the Cloud 100’s yearly rankings. 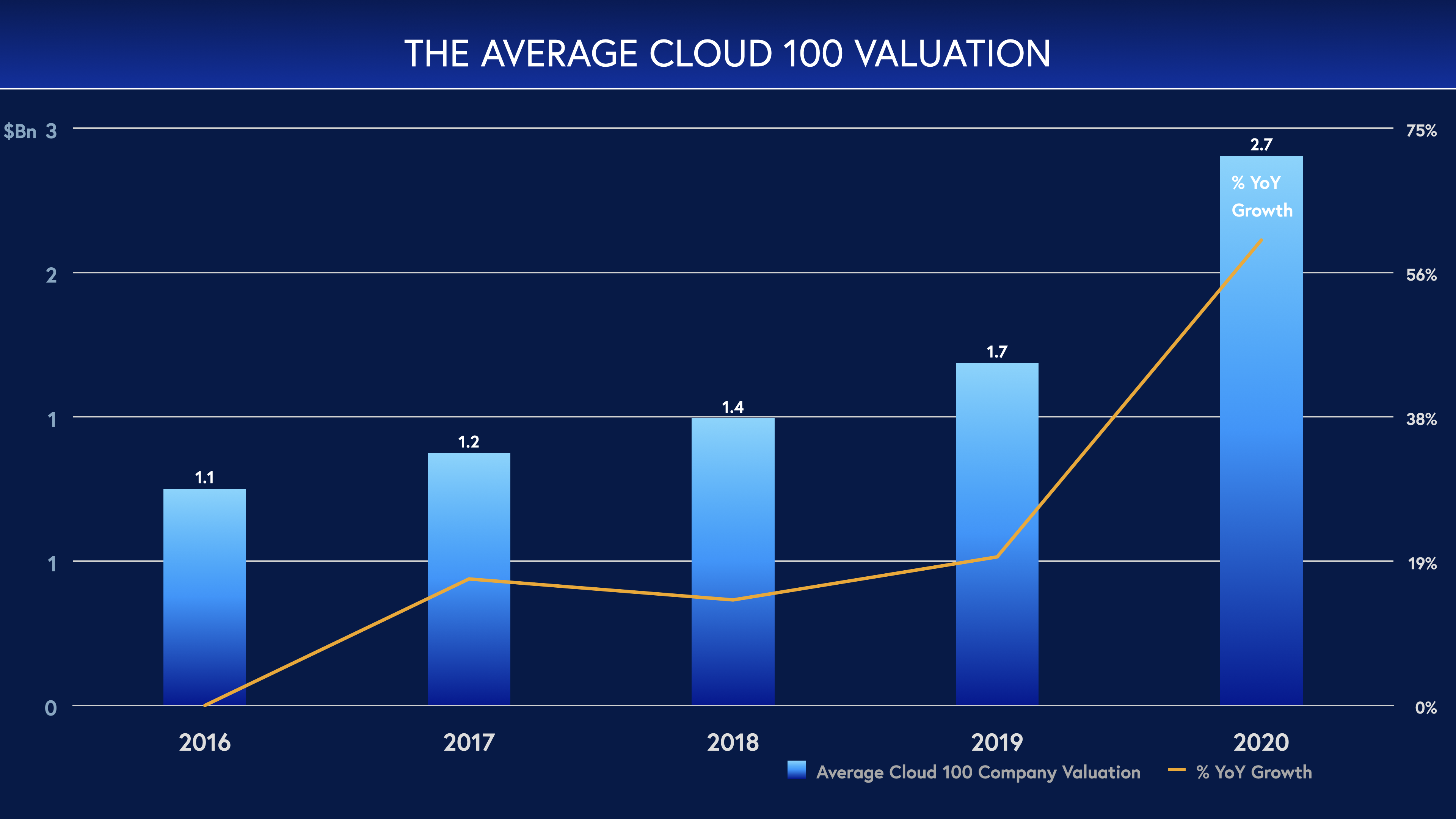 Private cloud valuations are getting bigger and the market’s appetite for cloud continues to grow. Over the past 5 years, the average Cloud 100 valuation has grown by a tremendous 2.5x, from $1 billion in 2016 to $2.7 billion in 2020. 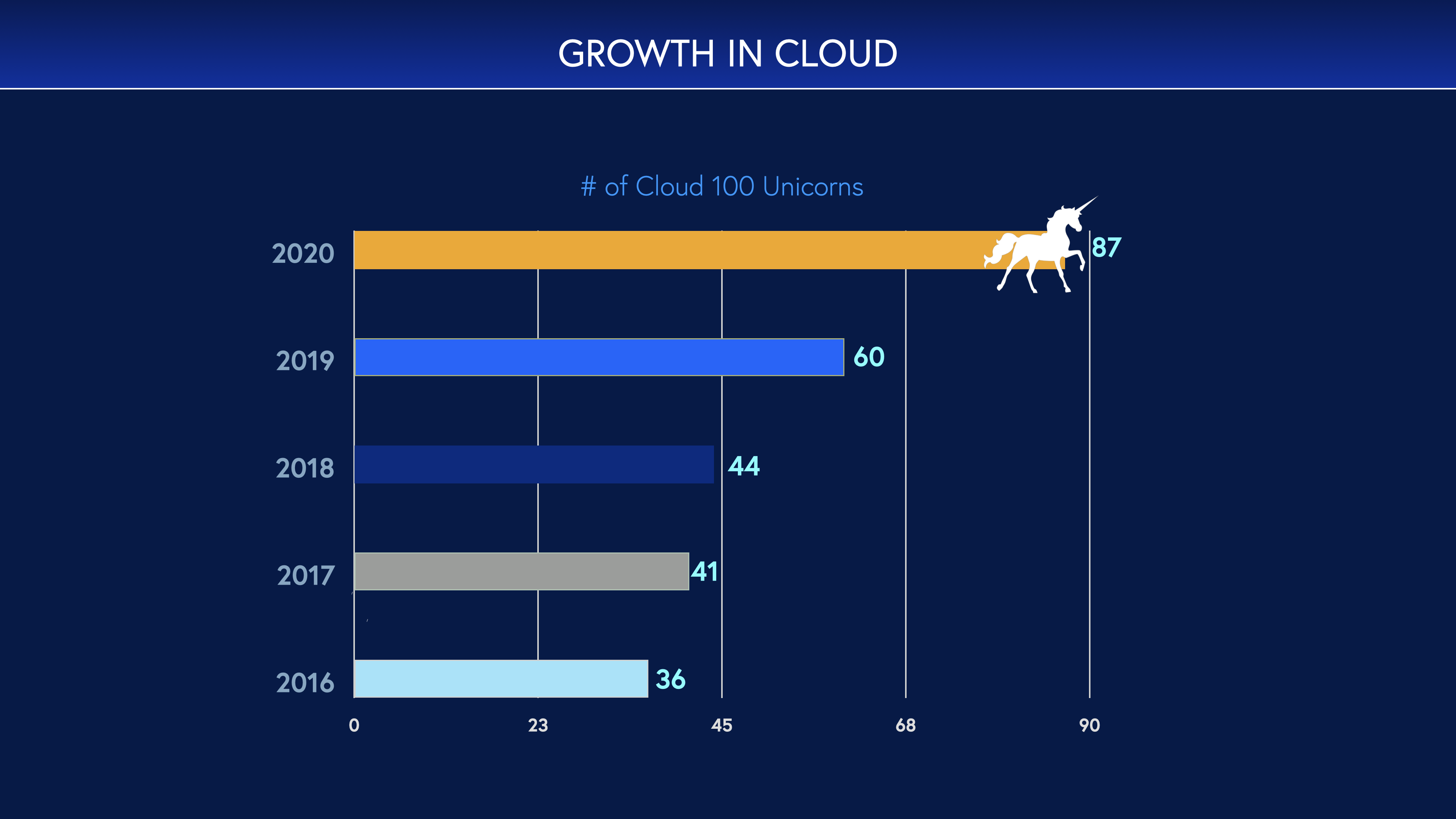 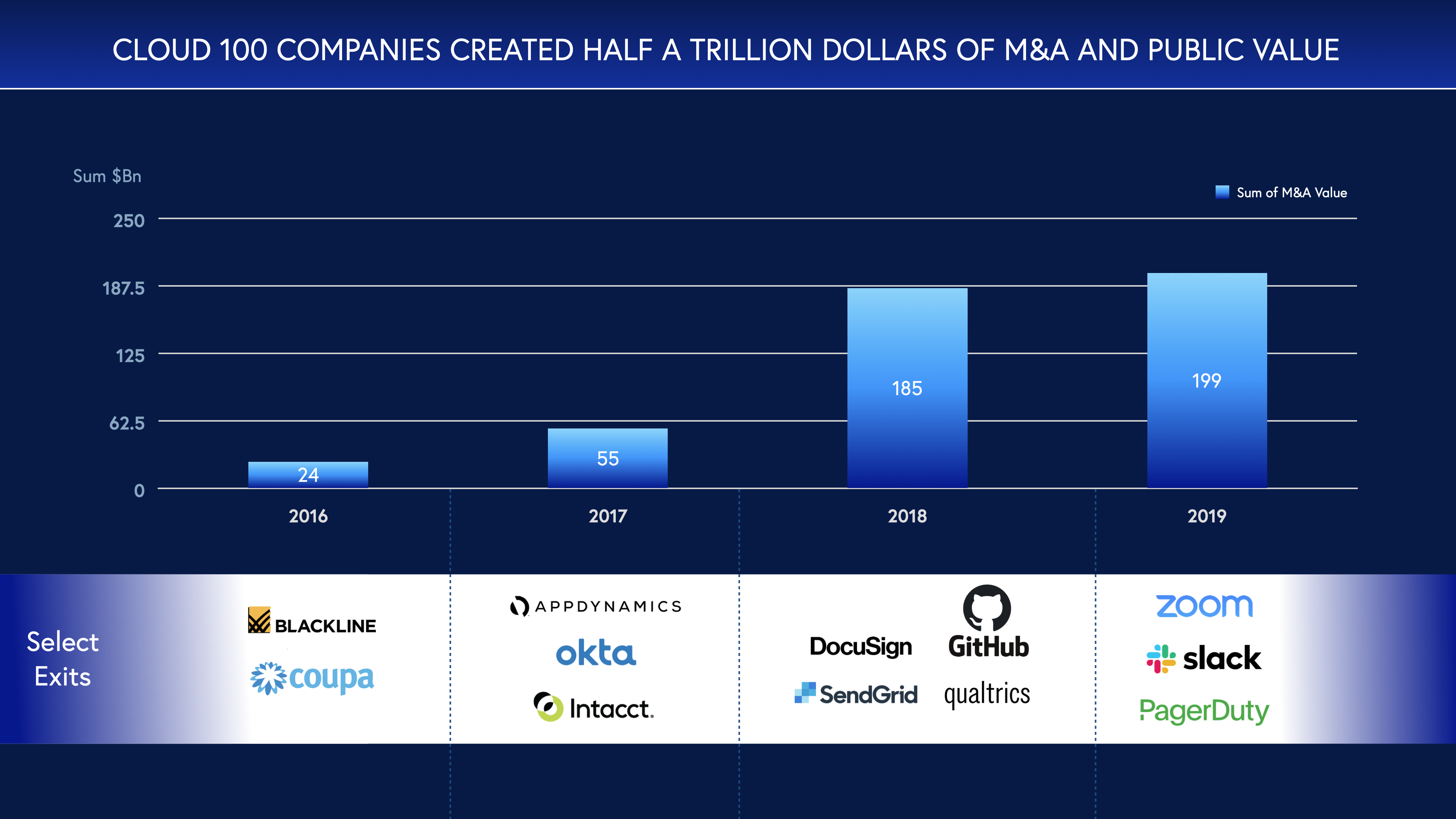 In 2020 alone there have been a number of exits for Cloud 100 companies, including nCino’s $2.8 billion IPO, Plaid’s $5.3 billion sale to Visa, and Salesforce’s strategic acquisition of Vlocity for $1.3 billion, and most recently Snowflake’s IPO in mid-September.

It’s clear from the past five years that The Cloud 100 lists have doubled as “shopping lists” for strategic and financial acquirers. Now that the cloud IPO window has re-opened, we expected to see some major IPOs happen before the close of the year, as we saw with nCino and other Cloud 100 Honorees.

Cloud will not only take over at least 75% of software by 2030, but it’ll also be a driving force in transforming subsectors, too. 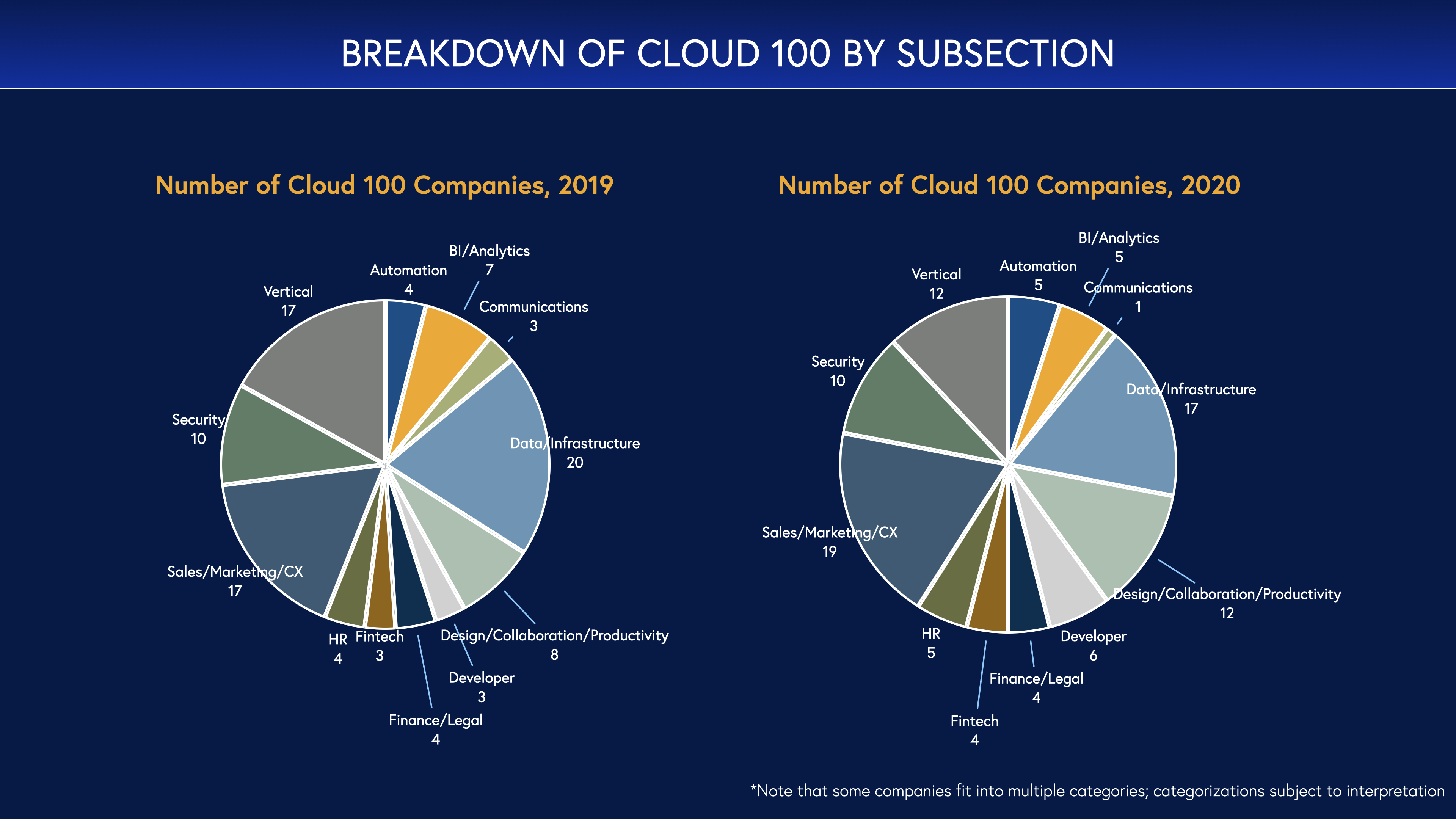 For example, from 2019 to 2020, Cloud 100 Honorees spanned 12 different sub-sectors, from vertical software, automation, data infrastructure, security, and more. Interestingly, the number of developer platforms along with collaboration and productivity solutions saw a 50% uptick in representation year-over-year.

To join the ranks of the Cloud 100 List is not just a milestone, but a strong indicator of your growth trajectory and your potential as an enduring company. 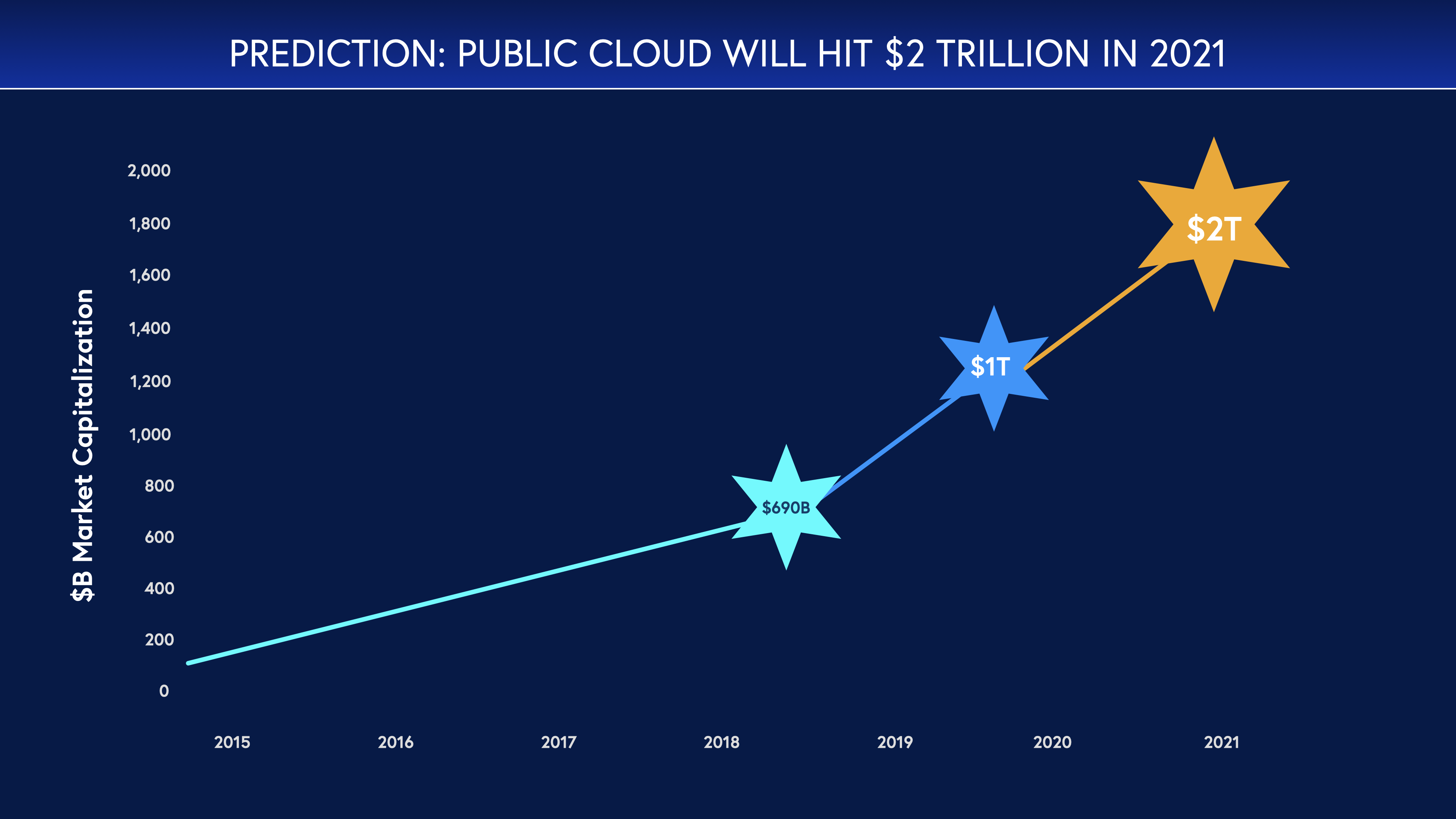 Now before we showcase the Cloud 100 List of 2020, we’ll end our industry update with one last prediction. As we mentioned, on this year’s list we have a record of 87 private cloud unicorns. With that in mind, we predict that for next year’s Cloud 100 List there will be a billion-dollar floor to join the Cloud 100 ranks!

And given the accelerated growth of the cloud industry we expect, by next year, we will be celebrating the public cloud markets hitting $2 trillion in market capitalization.