Cloud 100 is the definitive ranking of the top 100 private cloud companies in the world; these businesses also serve as an industry benchmark and measure the strength of the private cloud market. We are now taking nominations for the fifth class of Cloud 100 companies, with one week left to submit nominations.

While we’ve analyzed these top companies for over four years (2016-2019), for the first time, we’re openly sharing the key insights we’ve gleaned from the performance metrics and trends in order to reveal what underpins the Cloud 100’s yearly rankings. 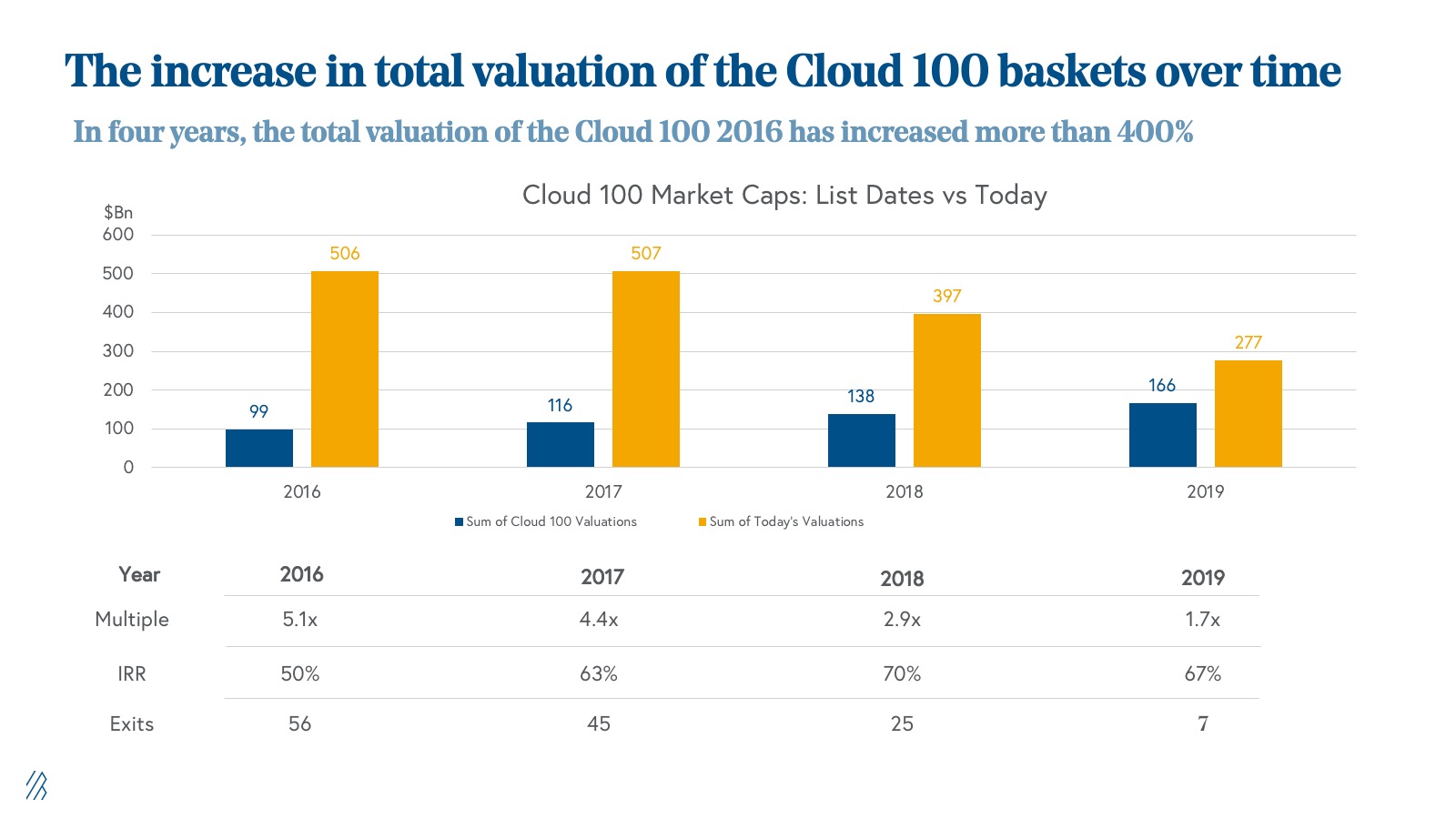 In our very first Cloud 100 Benchmarks Report, we share the insights and observations that not only highlight why getting onto this list is an accomplishment for cloud founders and executives but also help explain the fundamentals of private cloud companies to today’s company leaders.

As cloud companies have continued to prove their potential – both with their product leadership and financial performance in the public markets – their valuations in the private market have grown materially. 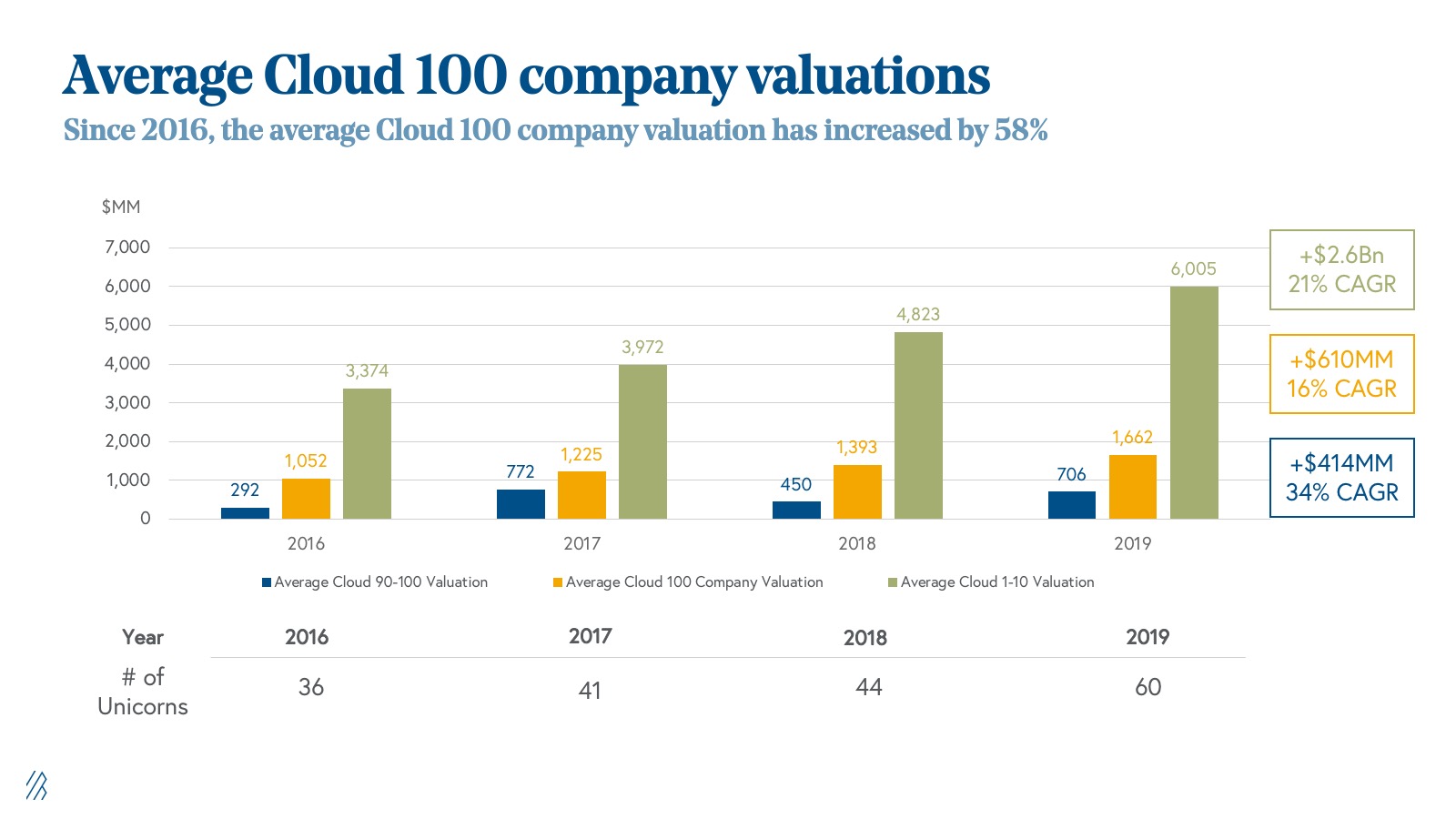 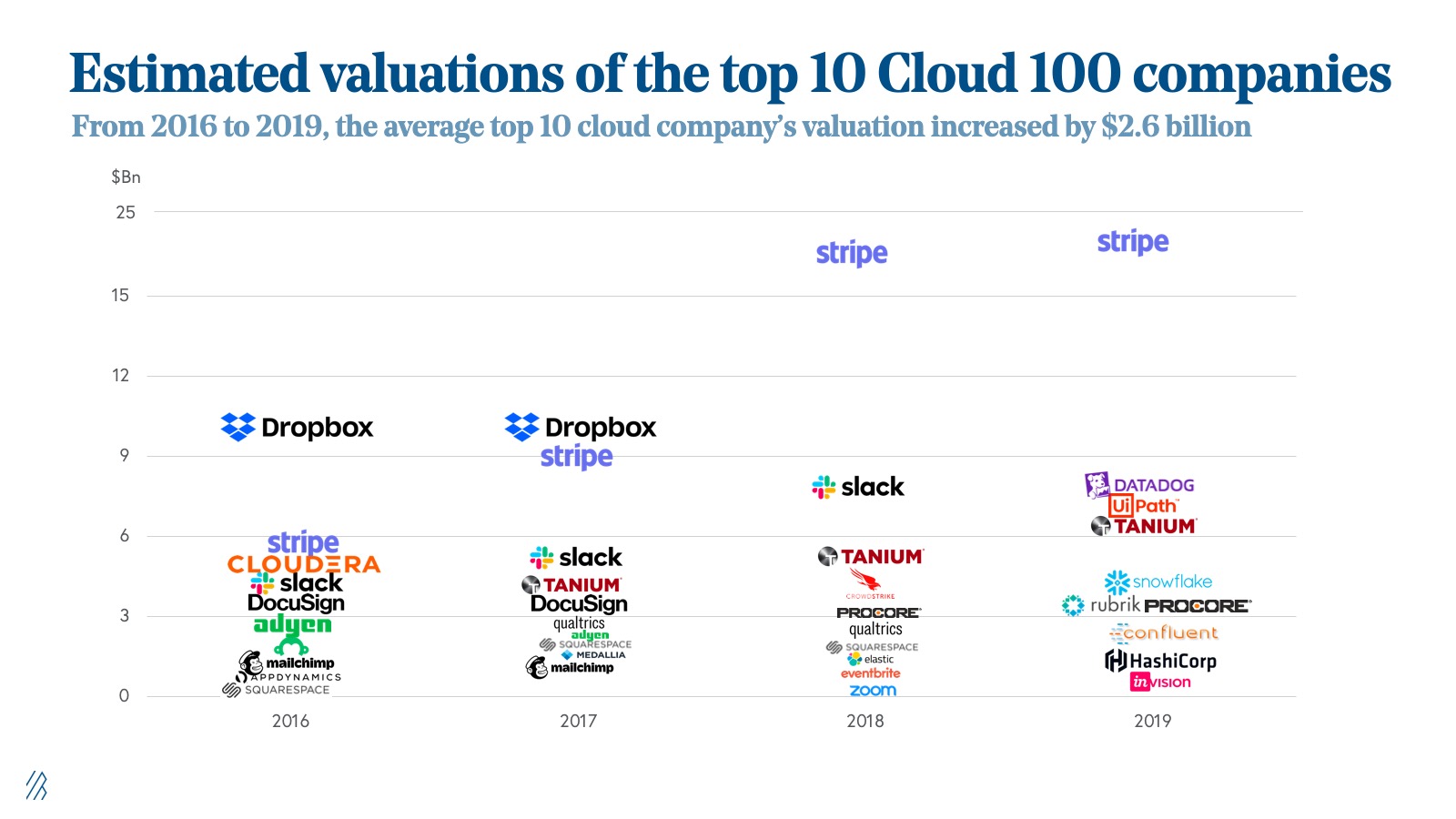 Where the data changes significantly is in the average valuation of the companies that rank #90 to #100 on the list every year. The average “bottom” ten cloud company on the list was worth approximately $290 million in 2016 and approximately $700 million in 2019, which is a 142% increase. This growth in valuation is likely due to cloud companies winning new business, both gaining net new customers and expanding retained customers, at increasing rates relative to legacy software companies. (For reference, in State of the Cloud 2020, we showed the upward trajectory of cloud consuming legacy software solutions.)

As a microcosm of the broader cloud software environment, the Cloud 100 data set illustrates the overall growth of the cloud category – which we believe will continue to expand from here.

The implication for 2020 Cloud 100 hopefuls is that the minimum valuation to make the list will likely increase again: only unicorns might make the 2020 list. We had 60 unicorns on the 2019 list, and we expect to see even more in 2020.

Cloud company exits have gotten bigger, and more frequent, than ever before in the industry’s history. 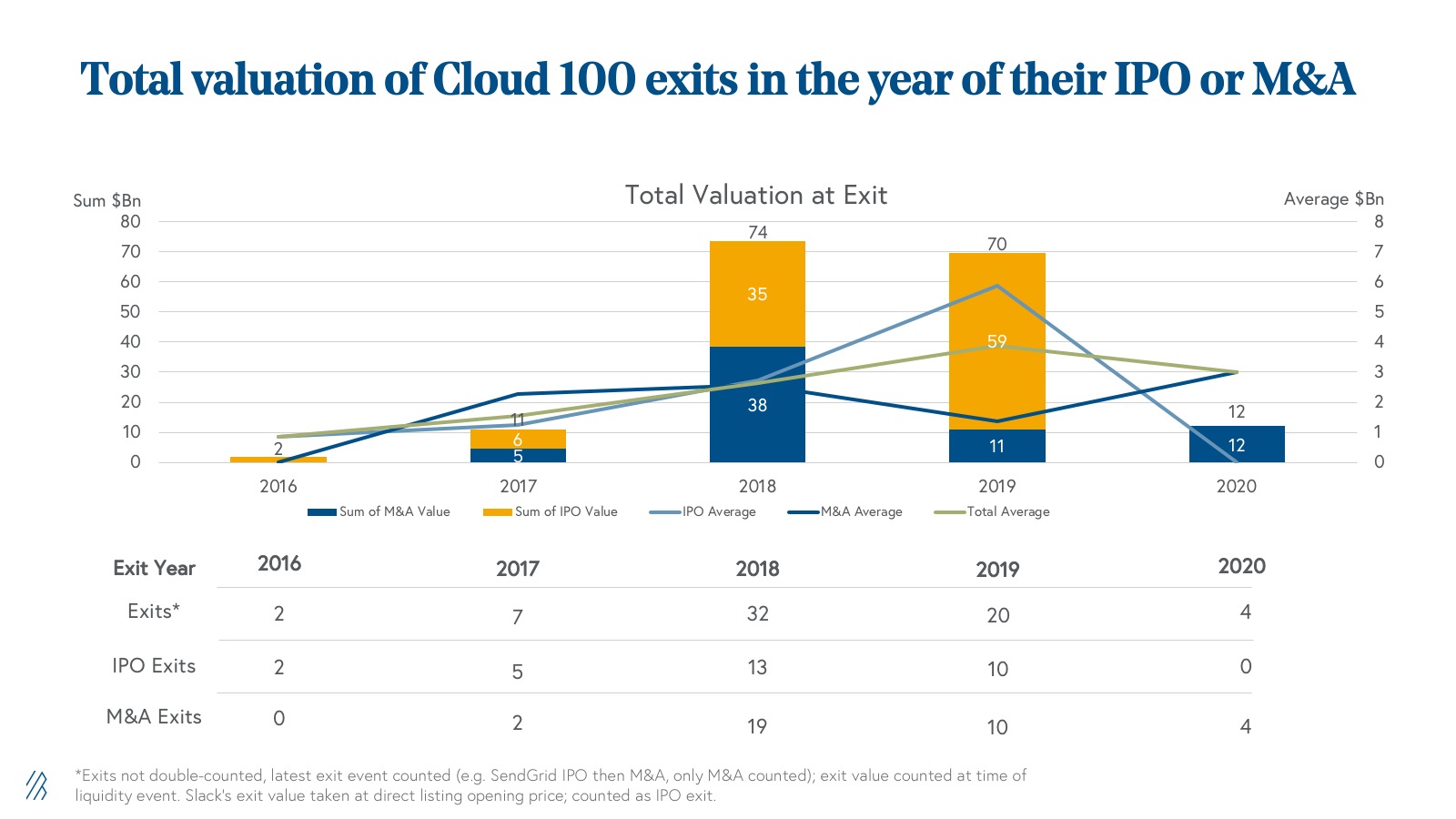 Of the 178 companies that have appeared on Cloud 100 lists, 65 of them, or 37%, have exited through an initial public offering or M&A, which speaks to the incredible quality of the cohort. What is even more impressive is their exit value. At the time of liquidity (either M&A or IPO), these 65 companies were worth a combined $168 billion. The average exit value was $2.8 billion across the four-year period but has changed substantially over time, going from $1 billion in 2016 to $3.9 billion in 2019 across 20 transactions.

On the IPO front, cloud companies are seeing record high valuations in the public markets, with the Bessemer Nasdaq Emerging Cloud Index trading at a \~14x run rate revenue multiple. The public cloud market cap currently stands at approximately $1.4 trillion, and the index has seen \~50% gains in 2020 YTD, far outpacing the returns of other major indices. 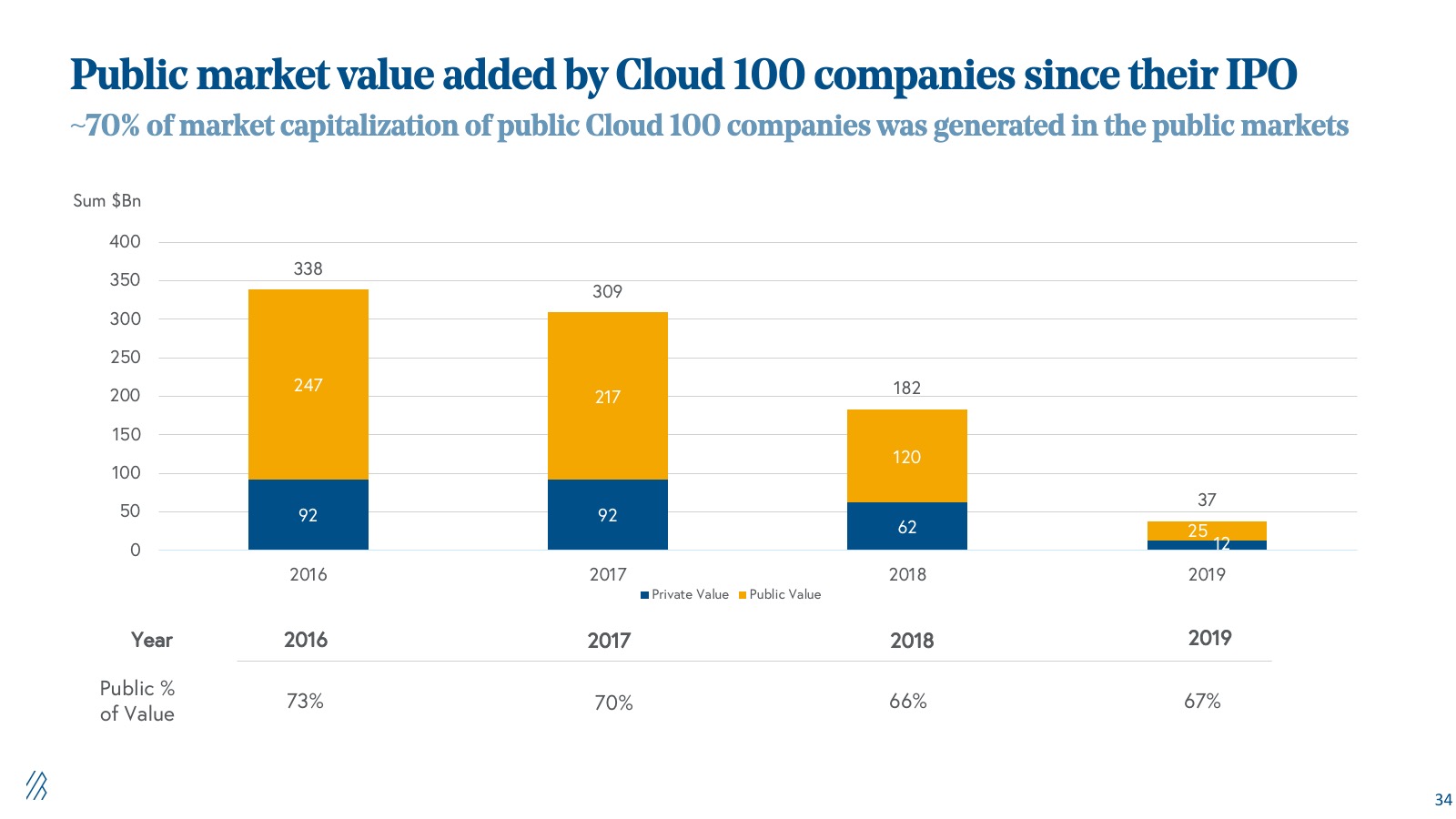 The possibility for value accretion in the cloud public markets cannot be understated. Double clicking on the returns for Cloud 100 companies reveals that the public markets account for much of their value creation. For companies that exited via IPO, only ~30% of their market cap was captured by the private markets – the rest was created while public.

So far in 2020, we have seen Plaid, Vlocity, Veeam, and Blue Jeans from the previous Cloud 100 lists exit, all via M&A. However, given the high cloud multiple environment and cloud’s resiliency, we should expect to see some large cloud IPOs in the second half of the year. As the trajectory of ^EMCLOUD demonstrates, the IPO window for public markets closed in early March with COVID-19 but has begun to reopen slowly. For example, Bessemer’s portfolio company nCino has recently filed its S-1, and its IPO is expected to happen later this year.

Now that the cloud IPO window has re-opened, we expect to see similar exit activity from previous Cloud 100 lists. Of the top private cloud companies in any given list year, almost an equal number go public as get acquired. 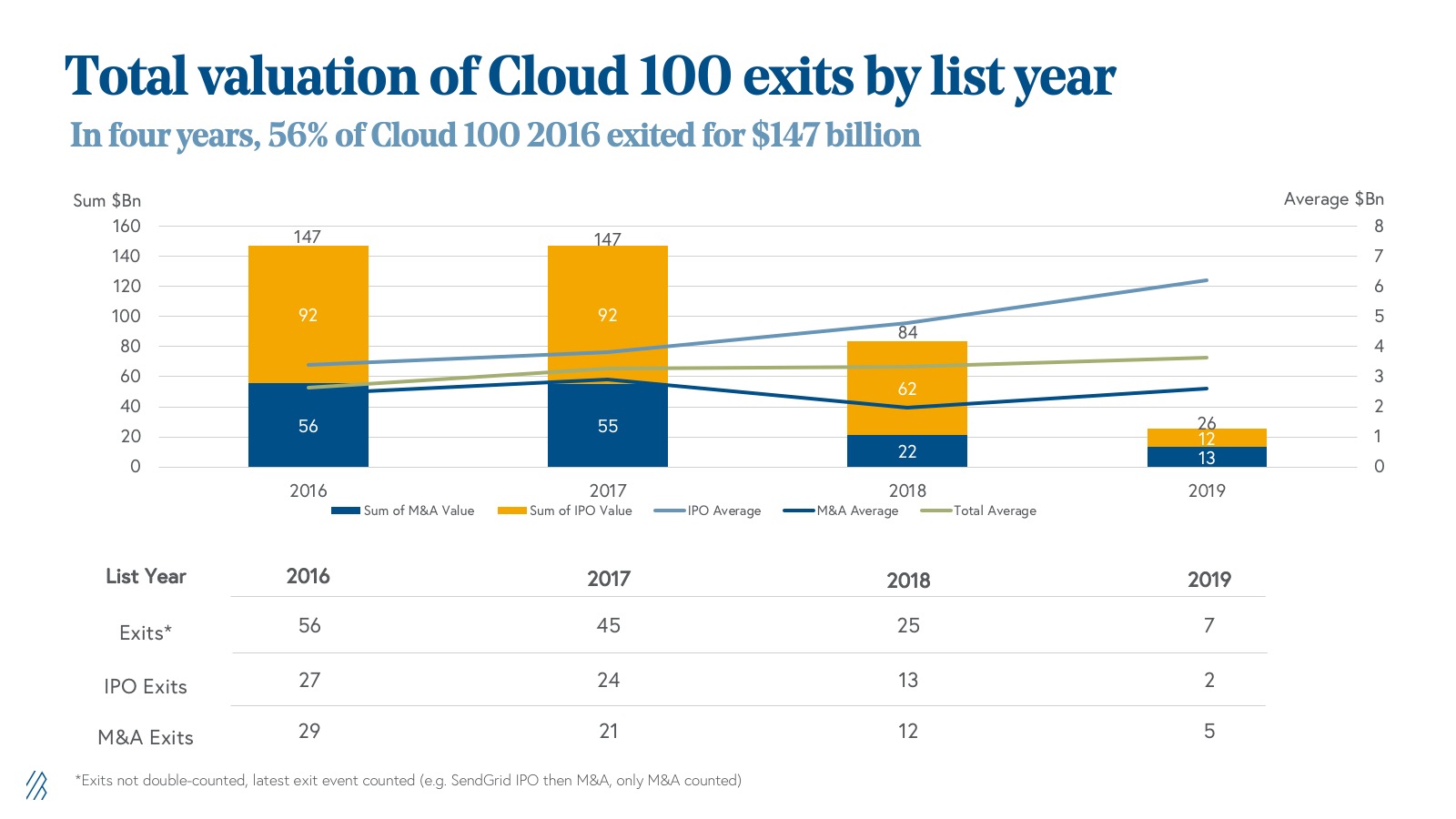 Cloud companies have proven to generate massive returns for shareholders and for employees, in both the acquisition and public markets. For Cloud 100 hopefuls, the data set on total company exits speaks to the caliber of the cohort: of the 65 Cloud 100 companies that have exited from all of the Cloud 100 baskets from 2016 to 2019, 44 of them (or 68%) had a billion-dollar exit or more. Being on this list puts you in great company.

As the basket of the top private cloud companies in any given year, the Cloud 100 list reflects the strength of the private cloud market and a possible indicator for what’s to come. Its growth, exits, and returns consistently point to ongoing momentum in the cloud industry.

We are confident that the next generation of transformative cloud companies will appear on the 2020 Cloud 100 list, many of which will experience the same tremendous success.

Stay tuned to read more about the updated benchmarks based on 2020 data and who makes this year’s list in September. To be considered for Cloud 100 2020, nominate your company today.