Databook: the new system of intelligence for enterprise GTM teams

Backed by Bessemer’s $50 million Series B, Databook is at the forefront of helping enterprise teams intelligently sell and win new deals.

Sales representatives are often at the frontlines and commonly the first interaction customers have with a company. Yet, most of them are not equipped with the data and tools they need to actually connect with prospects, identify their needs, and make a deal happen. In fact, sales productivity at the largest, publicly-traded enterprise software companies is severely lacking—only 57% of Account Executives make quota and only a third of a sales rep’s time is actually spent selling.

We’re witnessing a behavioral shift in how the world thinks about go-to-market and see it again-and-again in our diligence: Sales leaders at the world’s largest companies recognize that their GTM teams make or break a company’s trajectory.

B2B sales is only getting more competitive, with multiple fast-growing, well-funded competitors rushing to win the emerging B2B categories of today. Sales leaders are more eager than ever to arm their go-to-market orgs with software to unlock incremental growth. In doing so, sales enablement software has evolved into being critical infrastructure for the world’s largest companies.

The global pandemic also brought about a paradigm shift in digital transformation for GTM teams, permanently changing the future of work for the GTM organization, as workforces went fully remote or distributed, and traditional sales tactics (such as in-person conferences) had to evolve with pandemic restrictions. The proliferation of software adoption amongst teams increased productivity, efficiency, and scalability in a remote-first work environment.

On the Bessemer Growth team, we spend almost every day talking go-to-market strategy with entrepreneurs. We’ve kept a close eye on the rise of sales, marketing, and revenue tech tools to identify the best-in-breed software to help our portfolio companies. However, despite a plethora of sales enablement tools in the market, leaders we spoke to struggled to identify the ones that produced the clearest and strongest return-on-investment. On the frontlines, sales representatives recognized that deeply understanding customers was key to increasing win rates, and yet 70% of reps struggle to find the time and resources to research prospects and uncover customer insights.

When we first heard the effusive love for Databook both within the Bessemer portfolio and at the world’s largest B2B companies, we knew Databook stuck out from the crowd. From the first minute of implementation, Databook’s intelligence automation platform delivers tailored insights for selling to an account. Reps raved about how Databook empowered them to sell smarter and more strategically, all with a click of a button. What would usually take 21 hours in prep and research time for important executive sales meetings took less than 15 minutes when leveraging Databook’s intelligence platform. As Databook became an organization’s system of record for prospect intelligence and planning, sales teams were better enabled to serve their prospects and exceed quotas. Win-rates increased, especially with high-dollar deals.

The world’s largest and most prominent companies such as Microsoft, Salesforce, and Databricks, as well as several Bessemer portfolio companies including Guild Education, are all leveraging Databook to empower their sales teams. And as a powerful testament to Databook’s effectiveness: Databook’s own reps use Databook on a daily basis and fueled the company’s 300% consecutive year-over-year rocketship growth over the last four years!

But the power of Databook isn’t limited to the sales organization; its platform is an operating system for the entire go-to-market organization, unifying all functions around what’s most important: the customer. We’ve heard from many others in the GTM ecosystem including sales ops and strategy teams, marketers, and senior GTM leaders, about how the broader organization benefits from Databook, such as through more accurate forecasts, as well as cross-functional visibility and collaboration. 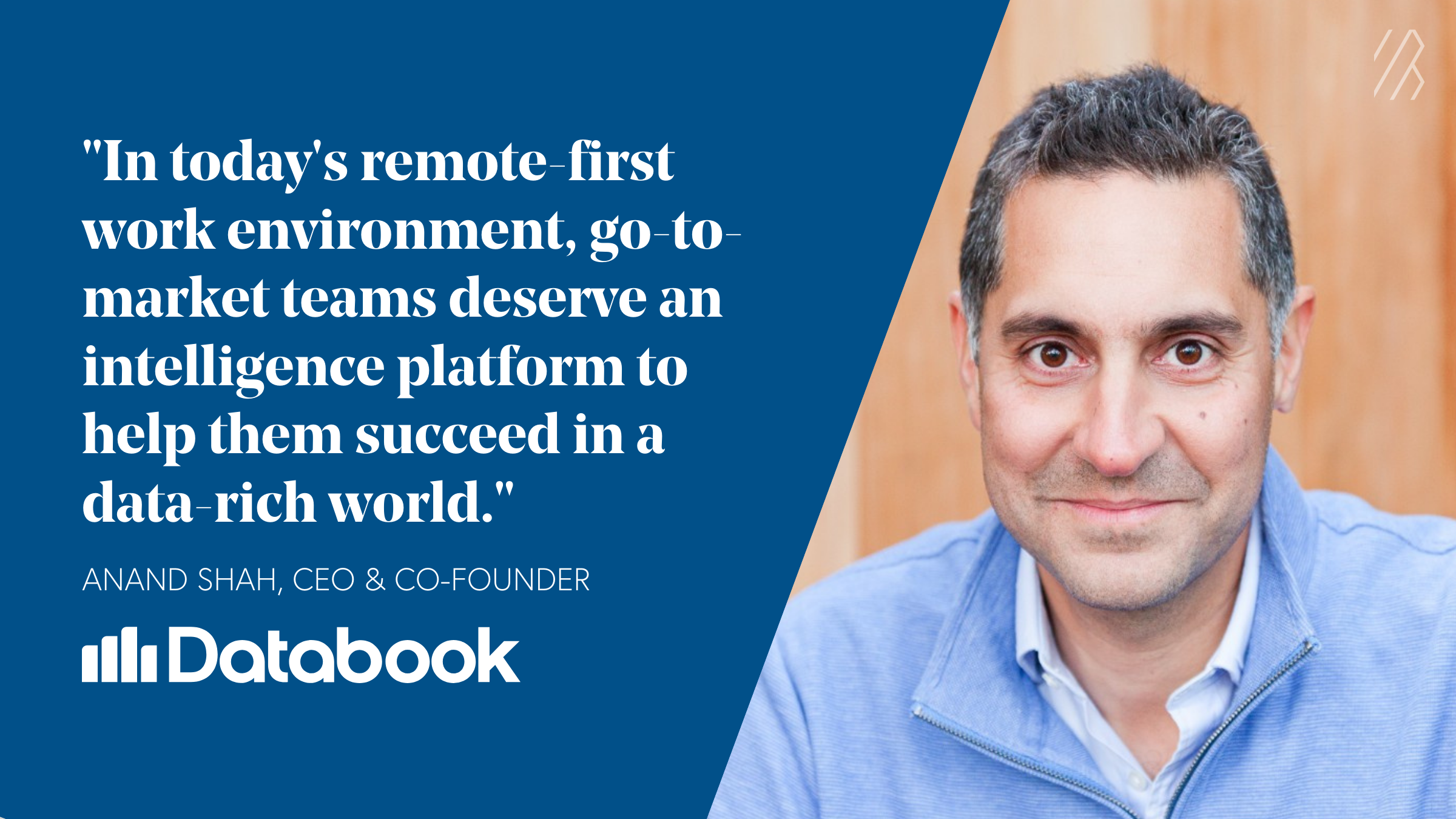 When we met Databook’s CEO Anand Shah and heard him articulate the Databook vision, it immediately became clear to us why they’ve captured mindshare at several of the world’s best B2B companies. We were blown away by Anand’s ability to combine a highly data-driven approach, a striking ability to dictate product direction, and a high degree of customer empathy. In a previous career as a consultant advising the world’s largest tech companies, Anand witnessed firsthand how GTM teams could not fulfill their full potential as they were not equipped with effective sales enablement tools. This served as his inspiration to start Databook with the ultimate goal of helping enterprise GTM teams hit peak performance, and helping individual reps sell at their best, deal after deal.

On Bessemer’s Growth team, we’re looking to partner with companies that will define the next century of how we live, work, and do business. We are delighted to partner with Anand and the rest of the Databook team as they forge ahead on their mission to empower GTM teams to achieve peak performance.