An inside look at our investment process for Twilio

Mark Twain once said that history doesn’t repeat itself, but it does rhyme. If Twilio provides any indication of what’s to come, we believe now more than ever in the future of the business-to-developer (B2D) space. As we reflect on 2016, Twilio’s IPO is a brightspot.

When we originally published “Eight laws for developer platforms,” we delved into our early memos recommending an investment in Twilio; then, and now, the company continues to exemplify these laws in practice. With permission from Twilio, we’re open sourcing an inside look at our original investment memos, which Byron Deeter, David Cowan, and I co-authored.

We diligence each company before investing and compile our findings into an investment recommendation that forms the basis for our internal discussions and consideration. Interestingly, we can clearly pattern match Twilio to almost all of our Eight Laws.

Not unlike SaaS businesses, successful developer platforms need to deliver predictable, recurring revenue — ideally that expands on a customer basis over time. Twilio charges by the call, phone number or text message, and this pricing schema has been core to Twilio’s 155 percent dollar-based net expansion rate (from their Q3 2016 10-Q).

This law runs in parallel with the first. Developer businesses sometimes mirror consumer businesses in that an initially free or cheap product becomes so valuable that developers are later willing to pay for it. Consider the number of companies that rely on AWS. Amazon allows customers to provision EC2 instances for as little as several dollars a month and scale as usage (and dependency!) grows to some very large numbers. In 2017, AWS does more more than $13 billion a year in revenue with 60 percent year-over-year growth; a large part of this growth comes from existing businesses.

In our Series B investment memo in 2010, we called out one such customer for Twilio:

“At the time of our seed investment in Twilio, we spoke to [name removed for privacy]. He was very positive on the product and basically told us that it enables him to extend his suite of lead generation services to voice products in a much simpler and more seamless way than any other alternative. He’s stayed a major Twilio customer since then, ramping up to close to $3K per month, and is still extremely happy with the platform.”

Our Series C investment memo in 2011 shows Twilio was growing, as planned, with their customers. Our concerns that the company’s revenue was solely from smaller startups were largely erased:

“One of the our other key concerns at the time of our investment was the company’s dependence on VC-backed Internet startups and as a result that their prospects would be correlated to VC financings. Through their enterprise sales efforts, they have begun diversifying revenue away from startups and into established businesses (and many startups have grown themselves so that they are no longer startups– e.g., Facebook) although this is still a risk.”

Developer platforms need to be so mission critical and such a step function improvement over the status quo that customers don’t mind paying up as their business succeeds.

It’s hard to get enterprises to make major spend commitments to new categories that aren’t replacing existing budget lines. We noted some examples of this in action at Twilio in our seed memo from 2009; here’s one case in point:

“The company has targeted the web development community in the hopes of getting web developers to build new voice applications using their system. At the same time, they have scored some early wins in getting web developers to rebuild existing voice applications using Twilio as often the original architect of the voice application is long gone when programming changes are needed. One early example of this is Earth911, which runs a national call-in number where you input your zip code and the system provides you with options on the nearest recycling center. The non-profit group needed to change some of the underlying logic of their voice application but didn’t have any of the original developers on staff. Rather than paying to get it reprogrammed, their web team rebuilt the entire application in less than a day using Twilio. It’s been up now foro more than 6 months at 1-800-CLEANUP with positive results.”

This one is self-explanatory. Enterprise products aren’t traditionally known for a focus on user experience or design (of course, there are exceptions). Twilio was an outlier here with an insane focus on making the experience super smooth and beautiful for the developer. We called this out in our seed memo:

“The Twilio product makes the process of building a voice application extremely simple for web developers without any specialized training or need to deal with telecom companies or specialized integration service providers. Similar to consumer web apps, customers can sign up for an account with Twilio, pick a phone number (or port over an existing one), learn the five simple building blocks that make up the basis of Twilio, and start building voice applications the right way. The five core verbs– architected to emulate XML– allow you to do much of the most commonly requested voice features, like gather a number from the caller (e.g., Press 1 to speak in English; 2 for Spanish; etc.) listen for voice input from the user (e.g., record a message), transfer a call, play a message, or disconnect the line. We build all of the functionality inherent in Grand Central (get one central number that transfers to all of your various lines) in about five minutes while on the phone with the CEO.”

This law runs in parallel with the fourth law. Developers are the consumers; if they are unhappy with a product, they will quickly go elsewhere and not return. True story: Twilio CEO Jeff Lawson used to kick off every board meeting by reading tweets from happy Twilio users. When people are vocal about their love of a product, something is being done right. This only partially dawned on us at the time of our Series B investment memo as we did scour Twitter for complaints — but only as it related to their support team:

“Both [name removed] and [name removed] also pointed out that Twilio is known for excellent, prompt support via their developer evangelists. A quick search through the twitterverse confirms this view; we were actually unable to find any meaningful complaints about the product in our searches (according to sentiment analysis tweets mentioning Twilio are 92 percent positive.)”

The product love was so strong that Twilio was able to hold off on building a large sales team early on:

“The company’s initial sales and marketing approach has been to use contests, promotions and social marketing targeting the web development community to generate viral buzz and word-of-mouth referrals. They have a part-time contractor on staff that focuses on direct sales but this has not been an active focus for the company. Likewise, they haven’t put in place any channel sales efforts– but see many opportunities to build indirect sales channels once they have the time and capital to focus here.”

Network effects aren’t only for consumer social applications. Developer platforms often exhibit similar characteristics. The marketplaces that exist at GitHub, npm, and Stack Overflow are both made increasingly valuable as more developers become active users and contributors. Twilio clearly has economies of scale through an advantageous cost structure; as higher volumes of communications are routed through their Super Network, they have increasing leverage. This network effect is subtler, but equally present in the case of Twilio, although it wasn’t until the Series C in 2011 that we called it out in our investment memo — and even then, it’s a fairly minor mention: 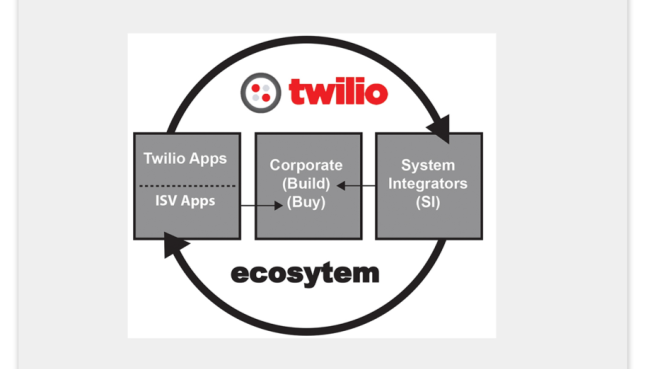 The truth is that as Twilio has grown, the network effect has become more prominent, given the large number of developers with active accounts (34,457 as of the company’s Q3 2016 10-Q — active account defined as spending at least $5 in the most recent month). The more developers trained on how to use Twilio, the more likely an enterprise or Independent Software Vendor will turn to Twilio to build a particular piece of functionality.

Developer platforms can have incredible leverage if they obviate the need for companies to build functionality that isn’t core to their competitive advantage. For example, payment processing was a headache for many until the advent of Stripe and other payment APIs geared to developers. Stripe eliminated the need for expertise in this area — well outside of most businesses’ primary domain — thus freeing up time to work on core product features. The opportunity cost of a developer’s time is not to be discounted. This is from our seed investment memo in 2009:

“Twilio is a promising young company with a bold vision to make a voice application as easy to set up and maintain as web applications. They’ve built a clever, intuitive interface that simplifies the extreme complexities involved in building IVR and PBX capabilities and have received many early accolades from prominent Internet influencers.”

Developer platforms that enable and empower non-developers are truly a needle in a haystack — but extremely powerful once the core mechanics are working. As we note below, we loved that some of Twilio’s earliest customers were from ordinarily non-tech-enabled organizations, such as the DNC and RNC. Twilio enabled them to power voter outreach, which felt especially prescient given the election around the corner (by which we meant the 2010 midterm election) and how candidates were trying to capture constituents on their platforms of choice (e.g. on mobile).

“Since then, Twilio has proven many mainstream uses for the service and have penetrated a variety of large enterprise accounts like Psychology Today, Support Space, the DNC via ISV mobile commons, RNC and others– all without any semblance of an enterprise sales or marketing effort.”

Twilio was Bessemer’s first investment in the business-to-developer space, and the first pure B2D API company to go public. It has been a pleasure to get both a backstage pass and front-row seat to Twilio’s success from a seed investment to an extremely successful company by any measure. Working so closely with Jeff Lawson and Twilio’s team over the years is not an honor we take lightly.

We are excited for the future of developer platforms, particularly the role they will play in transforming traditionally non-tech-enabled industries into the modern framework of web development.

We feel strongly that Twilio’s success in enabling developers to build creative and engaging applications in an area with clunky, inefficient alternatives — e.g. communications — is a trend we are going to see more and more of in the future.