Quantum sensors are the next frontier of sensing, as they can unlock innovation in frontier applications like brain-computer interfaces and precise position, navigation, and timing.

Over the past few years, interest in quantum has converged on computing in particular, but it’d be a mistake to conclude that quantum computing is the totality of quantum. In reality, the practical applications of quantum mechanics form what we call a “quantum triad.” While quantum computing leads at the helm, the other two legs of the triad include quantum sensing and quantum communications.

We’ve previously written about our views on quantum computing, arguing that the race to quantum advantage is a marathon but will ultimately revolutionize fields like chemistry, logistics, and finance. Today, we explore the promise of quantum sensing as a novel technology that will revolutionize the way we measure the world around us. 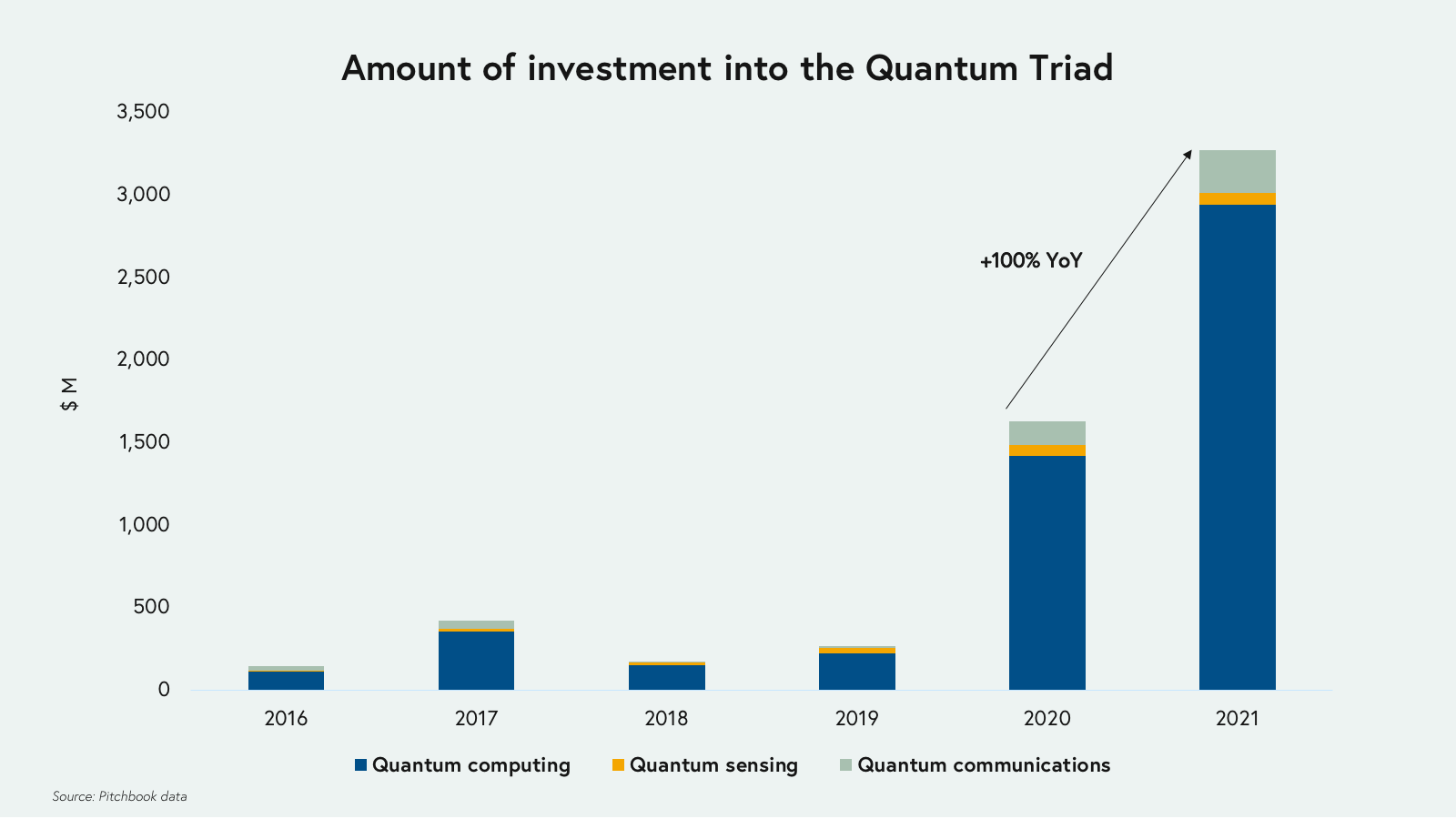 Quantum sensors are the next frontier of sensing, as they can unlock innovation in frontier applications like brain-computer interfaces and precise position, navigation, and timing. A quantum sensor measures changes in the environment by taking advantage of the fragility in quantum states. Indeed, we previously wrote that there is “this seemingly bizarre yet proven nature of the universe that until a particle interacts with another, its position, speed, color, spin, and other quantum properties co-exist simultaneously as a probability distribution over all possibilities.” This state is called “superposition.” The probability distribution of a superposition state changes over time as outside forces act upon the particle. Quantum sensing assesses the change in this probability distribution and works backwards to calculate the magnitude of the outside force that acted upon the particle.

Like quantum computers, quantum sensors can be implemented in different modalities depending on what physical property is being measured. Charged systems, like trapped ions, will be sensitive to electrical fields, spin-based systems will mainly respond to magnetic fields, and spatial systems will respond to gravity.

At first blush, this may not seem particularly revolutionary (after all, we have products like accelerometers, gyroscopes, and clocks that already work pretty well!). However, quantum sensors are a step function better than existing classical sensing products for three reasons.

First, classical sensors suffer from drift, errors that accumulate due to inherent imperfections and noise within the manufacture of the device. For instance, metal components (like springs) in sensors contract and expand with temperature, affecting measurement readouts. Due to drift, classical sensors are inaccurate and need to be re-calibrated. Meanwhile, quantum sensors measure relative environmental changes against absolute, unchangeable atomic properties (e.g., a rubidium atom is a rubidium atom anywhere in the universe!), so there is hardly any drift or need to calibrate

Third, and here’s where quantum mechanics come in, quantum sensors can achieve far better accuracy. The accuracy of a classical sensor is limited by the central limit theorem we learned in college statistics. That is, as a classical sensor makes additional independent measurements, the error (or, noise) of those measurements is random and therefore bounded by 1√n (where n is the number of measurements). This is known as the Standard Quantum Limit (SQL). Quantum sensors can exceed the SQL using a quantum mechanical property called entanglement. Entangled particles are tied together, so any environmental effect on one particle produces correlated changes on all particles it’s entangled with. With entanglement, noise becomes correlated rather than random, so quantum sensors with entangled particles enjoy higher resolution in measuring environmental effects. For quantum sensors with maximally entangled quantum particles (i.e., all particles are entangled with one another), the measurement error approximates 1/n.

Defense: Today, positioning and navigation rely heavily on GPS satellite signals, which can be lost in urban canyons or easily and deliberately jammed by malicious actors. According to the National Institute of Standards and Technology (NIST), the loss of GPS signal would be catastrophic, costing the U.S. economy $1 billion a day. Leading companies like Q-CTRL, Vector Atomic and ColdQuanta, however, are building a new Quantum Positioning System (QPS) using quantum accelerometers and gyroscopes, which provide positioning, navigation, and timing (PNT) availability without relying on existing classical signals.

Medicine: The ability to measure minute biological changes will revolutionize medicine. For instance, one holy grail has been figuring out how to decode neural activity. Today’s electroencephalography (EEG) systems measure the electric fields generated by neural activity, but these electric fields are weakened by electricity-conductive intracranial fluid, and existing sensors can’t pick up the minute changes. Quantum sensors, however, are accelerating the modern development of magnetoencephalography (MEG), the measurement of the tiny magnetic field generated by neural activity. Highly sensitive quantum MEGs can read signals even while we’re moving, opening the door to brain-computer interfaces. Major quantum sensing companies for use in medicine include QDTI and ChipIron.

Environment: Understanding underground rock and soil conditions has many environmental applications. Conventional underground imaging either uses radar, which hardly penetrates the ground, or requires high capital expenditure to drill a site. By contrast, quantum gravity sensors and magnetometers placed at the Earth’s surface can detect all the way to the center of the planet. Companies such as SBQuantum and Nomad Atomics that are building these sensors can therefore uncover new minerals and water resources, more accurately detect environmental phenomena such as earthquakes and volcanic eruptions, and enable novel environmental applications like carbon sequestration.

Because computing has dominated venture attention in quantum while sensing has largely lagged behind, it’s useful to shine light on some of the differences between quantum sensing versus quantum computing to see where each is heading.

Another difference is the go-to market strategy. In quantum computing, one general-purpose quantum computing processor that reaches quantum advantage can immediately unlock a host of novel applications. However, in quantum sensing, there is no notion of a “quantum advantage,” a single point beyond which commercial customers will flock to a single quantum sensor in droves. So, the quantum sensing market may be more fragmented, and progress may be more incremental, as companies will need to target specific markets and build sensors that meet those markets’ needs. Which markets suffer from sensor accuracy right now? Are certain sensors running into a brick wall in the form of the SQL? Quantum sensing companies need to select their end market (e.g., brain imaging, resource exploration) carefully and work backwards to develop the right sensor while quantum computing companies need to develop the processor first in order to unlock a host of new applications and industries.

Technology readiness levels (TRL): Notwithstanding the above, some argue that quantum sensing presents a nearer-term market opportunity than quantum computing does due to their respective technology readiness levels (TRLs). Quantum computing requires a system of maximally entangled qubits, and quantum computers need to be able to probe and control their qubits with astronomical precision. This presents acute technical challenges. While qubit count has steadily increased (Rigetti recently announced an 80Q chip, and IBM announced a 127Q chip), we are still at least a few years away from a commercially valuable quantum computer.

Quantum sensors have actually already been around for the last few decades. In the 1960s researchers developed the first SQUID (superconducting quantum interference device), a highly sensitive magnetometer that uses superconducting qubits (the same modality used by the likes of Rigetti and Google in building their quantum computers), and in the 1950s companies began developing quantum clocks that keep time by measuring energy levels in cesium and rubidium atoms. So if quantum sensors have been around the block, is now the time for quantum sensors to take off in the startup world? Below, we examine a number of factors explaining why this category is worthy of attention and investment.

Market dynamics: Some estimate that the sensing industry as a whole will be a multi-billion dollar industry. However, how much of the market can a single quantum sensing company capture? As we noted above, different end customers or applications will have different sensing needs, and it’s unclear whether one company can build a generalized quantum sensor that can be easily re-purposed for multiple industries. In quantum sensing, companies will need to start by carefully selecting the specific niche application and then work backwards to find the custom sensor that meets the need.

Furthermore, while a quantum sensor can be commercially valuable as an end product by itself, it often will need to be integrated with other hardware (e.g., quantum clocks are parts of satellites). As a result, quantum sensing companies will need to sell to OEMs, which could lengthen sales cycles. A large customer base for quantum sensing companies will also be governments, hospitals, and industrial companies, all of which generate lumpy but infrequent revenues.

Finally, it’s important to consider where different quantum sensors fall in their respective value chains. For instance, as we’ve seen in the drone industry, software analytics may capture more value than the sensors themselves. Quantum sensors that are built into robots or other physical devices will be part of complex value chains that include other pieces such as software analytics, communications hardware, and actuators. The value that a quantum sensing company can extract in a value chain will therefore differ from application to application. For example, in some cases, a sensor may be a value chain commodity that will easily be replaced by further sensor developments down the road. In such cases, perhaps full-stack companies that integrate quantum sensors into an end hardware product may find more success in the market than standalone sensor companies.

Cost, size, weight, and power (C-SWAP): Quantum sensors are difficult to manufacture. Many of the required subsystems, such as lasers and vacuum chambers, have not had their costs or sizes driven down by mass markets. SQUIDs have traditionally cost millions of dollars, and old quantum clocks are relatively bulky at ~250 cubic centimeters, making these sensors impractical for many customers. As a result, thus far, many innovations in quantum sensing have been limited to the theoretical and confined within the lab environment.

The promise of quantum sensing

To date, quantum sensing has received the least amount of attention out of the entire quantum triad. While quantum sensing holds the promise to revolutionize a number of sensing applications, the technology still faces strong headwinds on the path to commercialization.

Nonetheless, we believe that the three legs of the quantum triad will continue to develop in parallel, and progress in one leg will feed into the others. Indeed, current quantum computing advancements in developing new and better ways to entangle qubits and put qubits into states of superposition across different modalities will benefit quantum sensor sensitivity and accuracy.