The VR revolution is not yet here, but it’s finally near—we see potential for immersive experiences and businesses from social to gaming to developer platforms.

How many times in 2015 did you hear that virtual reality (VR) would be the next big thing? Well, it is 2022 and we’re saying the same thing. Déjà vu? Inflated expectations? Maybe. But we see signs that VR is nearing an inflection point that could fundamentally change how we live, work, and play.

Thanks to years of technological advances and gradual adoption, the VR ecosystem has matured sufficiently to impact consumer behavior at scale. New platforms are often the basis for new business ideas. In the same way that personal computers, smartphones, and video game consoles laid the foundation for the last generation of multi-billion dollar consumer businesses, VR headsets and platforms hold the same potential for the next generation of consumer tech.

At Bessemer, we bet on the future. Rather than focusing on the “why now,” we think about the “why very soon”—the point at which platforms have evolved and pioneering technologies are reaching an inflection point in functionality, availability, and affordability. The development of the VR ecosystem is a multigenerational tale, but recent milestones indicate we are getting closer to that inflection point.

Over the last century, there have been multiple attempts to develop consumer VR headsets with only modest success until the last decade. In the 1950s, VR transformed from fantasy into reality with the Sensorama and Sword of Damocles, the first VR/AR head-mounted display. In the 1990s, Sega and Nintendo attempted to launch consumer headsets, but the products were clunky and failed to commercialize. It wasn’t until 2012, when Oculus began developing the Rift, the first major VR headset to achieve broad consumer adoption, that activity kicked into gear. The Rift was many consumers’ first immersive and affordable VR experience. But its high retail price and technical limitations showed it wasn’t quite ready for mass market prime-time. When the $599 device hit the retail floor in 2016, it required a tethered connection to a powerful computer, and consumers complained about “simulator sickness.” In other words, these headsets often led to symptoms such as nausea, dizziness, and even eye strain. 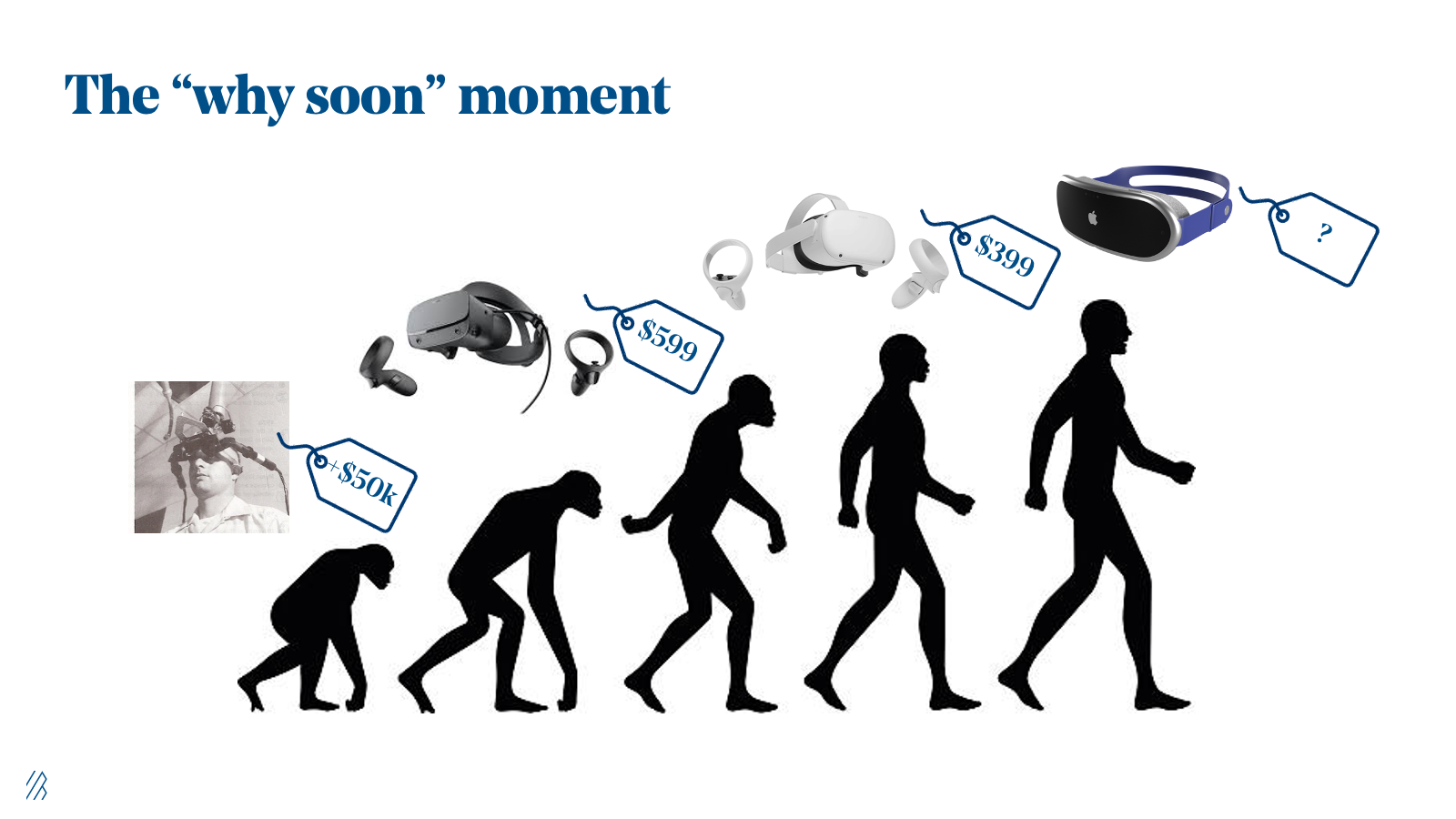 A few short years later, the device has made major strides. Consumers can now buy a Meta Quest 2 for $399, 1.5x cheaper than the original flagship product. The latest headset is both cheaper and easier to use. Previously consumers had to choose between a) high-fidelity experience in a tethered headset or b) meaningfully lower quality experience with the freedom of an untethered headset. Quest is the first standalone headset that maintains high-resolution quality because its Qualcomm Snapdragon XR2 chip has double the central processing unit (CPU) and graphics processing unit (GPU) performance of its predecessor. This enabled the category to cross a key performance threshold: more powerful chips enable lower latency and higher resolution, unlocking better consumer experiences. Now consumers can have both high-res/low-latency experiences in an untethered headset.

And there are signs that the mass market wave is finally starting. Meta has sold more than 10 million headsets, quickly approaching 15 million. And Meta committed to invest at least $10 billion into Reality Labs, its division responsible for developing VR hardware, software, and content. Commercialization begets innovation. Today, developers are encouraged to create new content for the Meta Quest app store. And so the adoption-developer flywheel begins.

We’re beginning to see early indications that real businesses might be built in VR. With growth in users and revenue, companies are signaling a new application layer may be materializing, which in turn is attracting attention from venture investors and strategic buyers alike.

These are not the only standouts. We’ve mapped six key categories where large companies are emerging in and around VR. 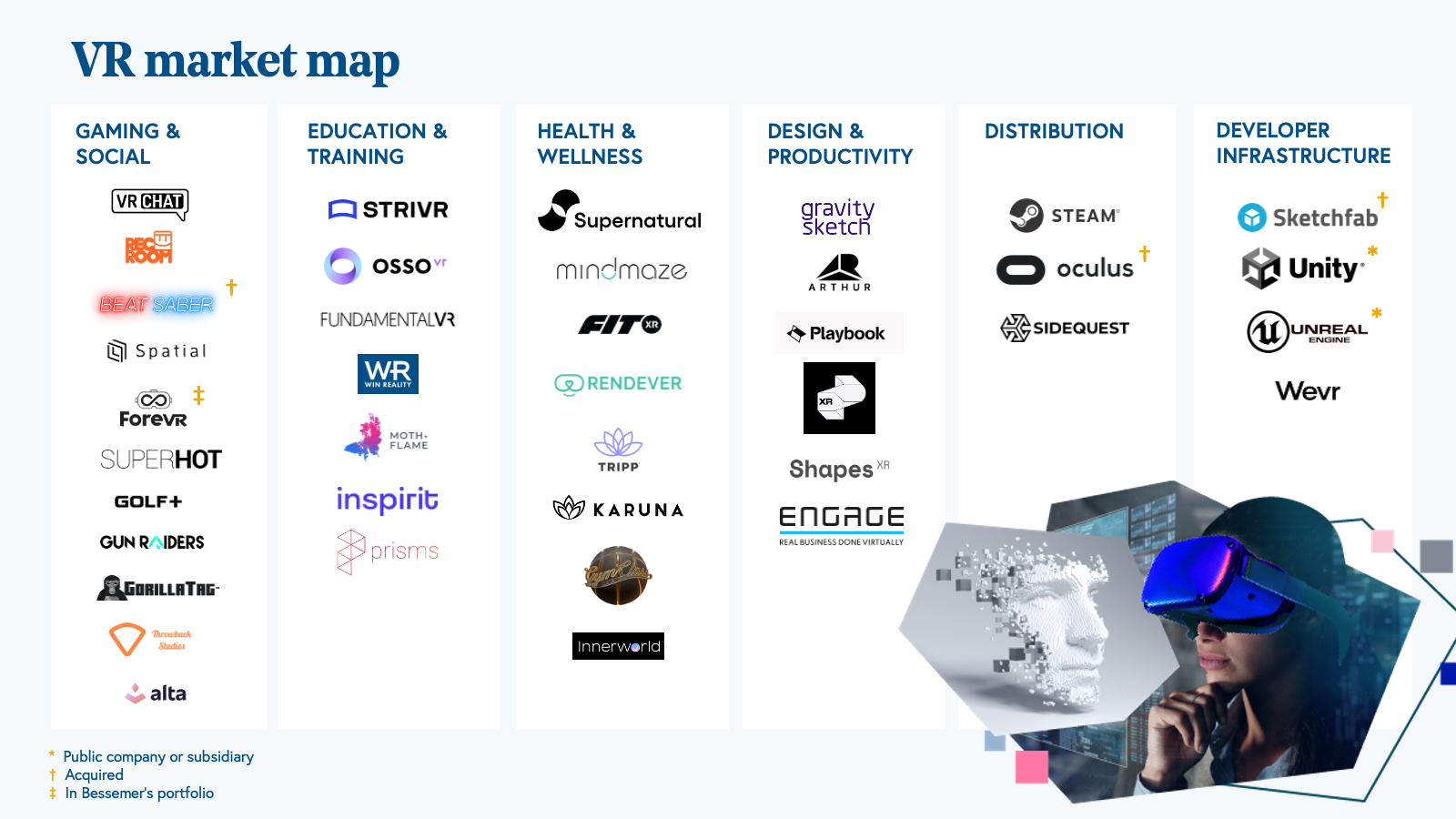 The most exciting VR companies check at least one of two boxes: they either a) significantly reduce the cost of a real-world alternative, and or b) deliver an experience that is impossible outside of a headset. We’ve identified a handful of promising categories with the potential to satisfy this equation, including (but not limited to) the following:

The best gaming experiences feel real. Consumers buy huge displays and high-quality sound systems in order to feel more present in their digital worlds. Now, games like Gun Raiders offer hyper-immersive 360 game experience—some so realistic that they lead to run-ins with walls. Bessemer recently invested in ForeVR which is officially the only virtual reality app that lets you truly feel like you’re bowling on the moon!

Industrial design processes are often inefficient. For example, designing a car takes years of back-and-forth between design and engineering teams. These teams carve dozens of models out of clay blocks before landing on a model. Designers and engineers use Gravity Sketch to collaborate in VR and iterate on designs far faster, reducing an expensive multi-year process into a few months.

We are too familiar with Zoom. It is great for some things, but it doesn’t provide a rich, immersive experience. Companies like Arthur are working on building more connected work environments in VR. From integrating with tools like Miro to enabling life-size storyboarding, digital collaboration is more engaging in VR.

Watching an event on YouTube comes nowhere close to attending the real thing. VR has the potential to make the streaming experience 10x better. Companies like AmazeVR give consumers a front-row seat to high-quality immersive events. In the future, these productions will become easier to access, more realistic, and interactive.

High-quality skills training is usually expensive and rarely convenient. Training is especially important in high-stakes fields like surgery and special operations, where real-life examples are not ideal learning grounds. Osso VR is one company enabling surgical training and assessment in VR. Not only is Osso ultimately a safer and cheaper way to train for a procedure, but it’s meaningfully better, resulting in a 230% accuracy improvement compared to traditionally-trained surgeons.

There are still significant challenges to building in VR today: 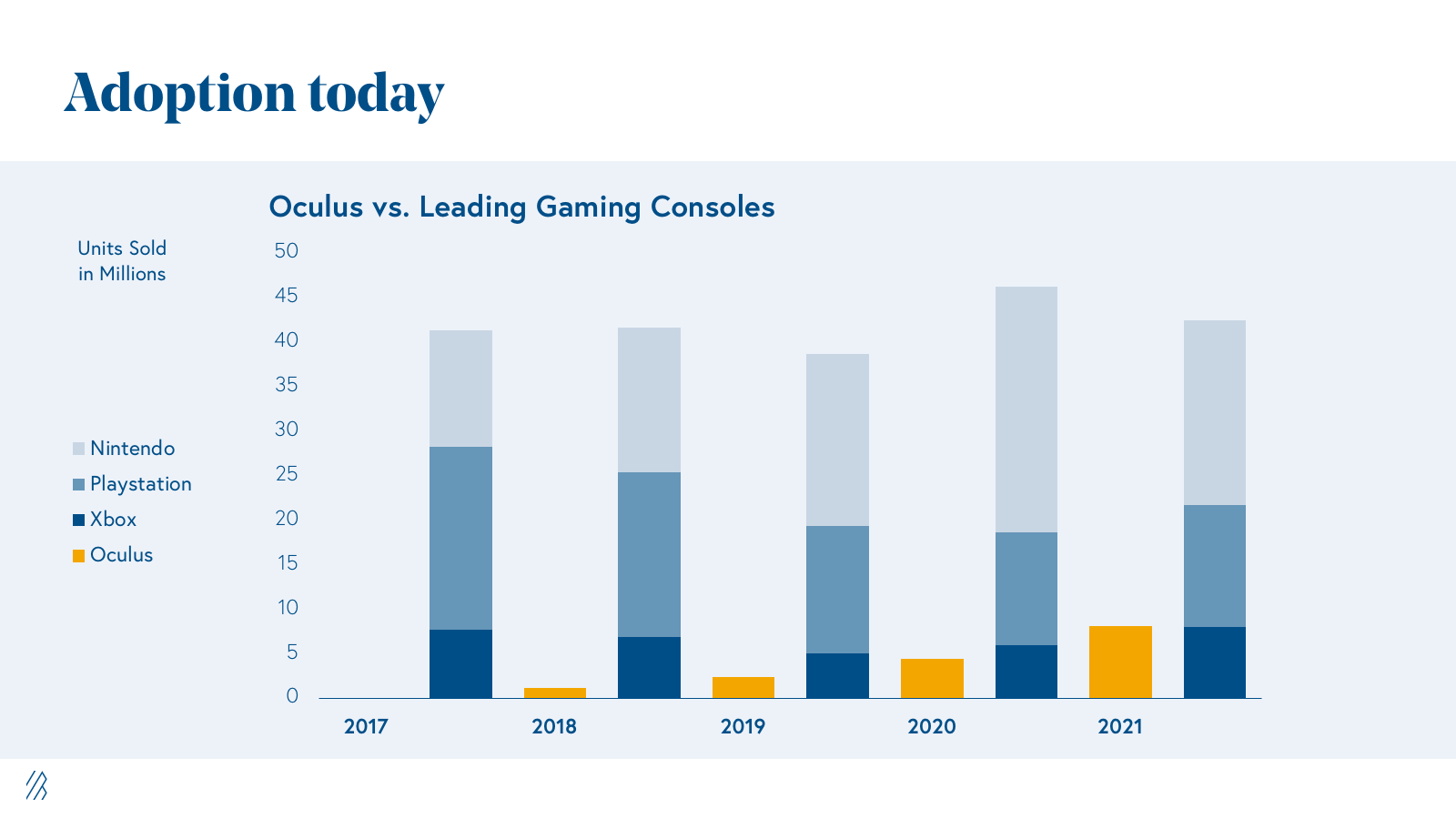 These obstacles have been around during every VR hype wave. So why do we think that we’re closer to solving them now?

We think it’s important that founders think about a few things as they build in this space:

We are closely watching a few key areas:

VR has the potential to scale rapidly over the coming years. The technological achievements of Meta’s Quest 2 and adoption signal that the VR flywheel is picking up speed. VR will transform the way we play games, design products, collaborate, exercise, and socialize. It is no longer an “if” question—it’s now about “when.”

If you are building in the AR/VR space, we’d love to hear from you. Feel free to reach us at virtualreality@bvp.com or on Twitter at @kentbennett, @TaliaGold, @IanRich07, @KwalkyTalky, @lucypless.