Looking toward a greener future

Climate change is a global existential crisis—new technologies and software will play a critical role in cultivating a greener future to protect human life, ecosystems, and build healthier economies.

The very first Earth Day was a protest in June of 1970 to bring global awareness to humanity’s impact on the planet. Two years later, research was presented in Stockholm at the United Nations Conference on the Environment making the connection between economic growth, the pollution of the air, water, and oceans, and the well-being of people around the world. Climate change has been a topic of discussion for nearly half a century, but it wasn’t until 1992 when geopolitical parties recognized it as a serious issue and constructed accords, including the Kyoto Protocol and Paris Agreement.

Throughout the years, strides for a greener future have been thwarted mainly due to corporate interests and lack of mainstream commitment. But as regions around the globe experience droughts, fire seasons, floods, hurricanes, and environmental catastrophes, the consequences of climate change have increasingly become existential threats to humanity.

The most recent assessment from the IPCC claims we’ve reached a critical tipping point; many have fallen into despair that change isn’t possible. However, with the future at risk and new activists such as Greta Thunberg on the rise, younger generations have inspired a shift in the way consumers and businesses interact and participate in the energy economy.

At Bessemer, we’ve been making investments around sustainability and climate for over a decade. These investments span multiple roadmaps, including companies like Sila Nanotechnologies, building the next-generation lithium-ion battery to Spire, a space technology company collecting data from satellites to power weather and climate modeling. With recent investments in alternative/plant-based food companies like Forever Oceans, Atomo Coffee, and Black Sheep Foods, our firm’s frontier tech practice is no stranger to climate-focused investing. 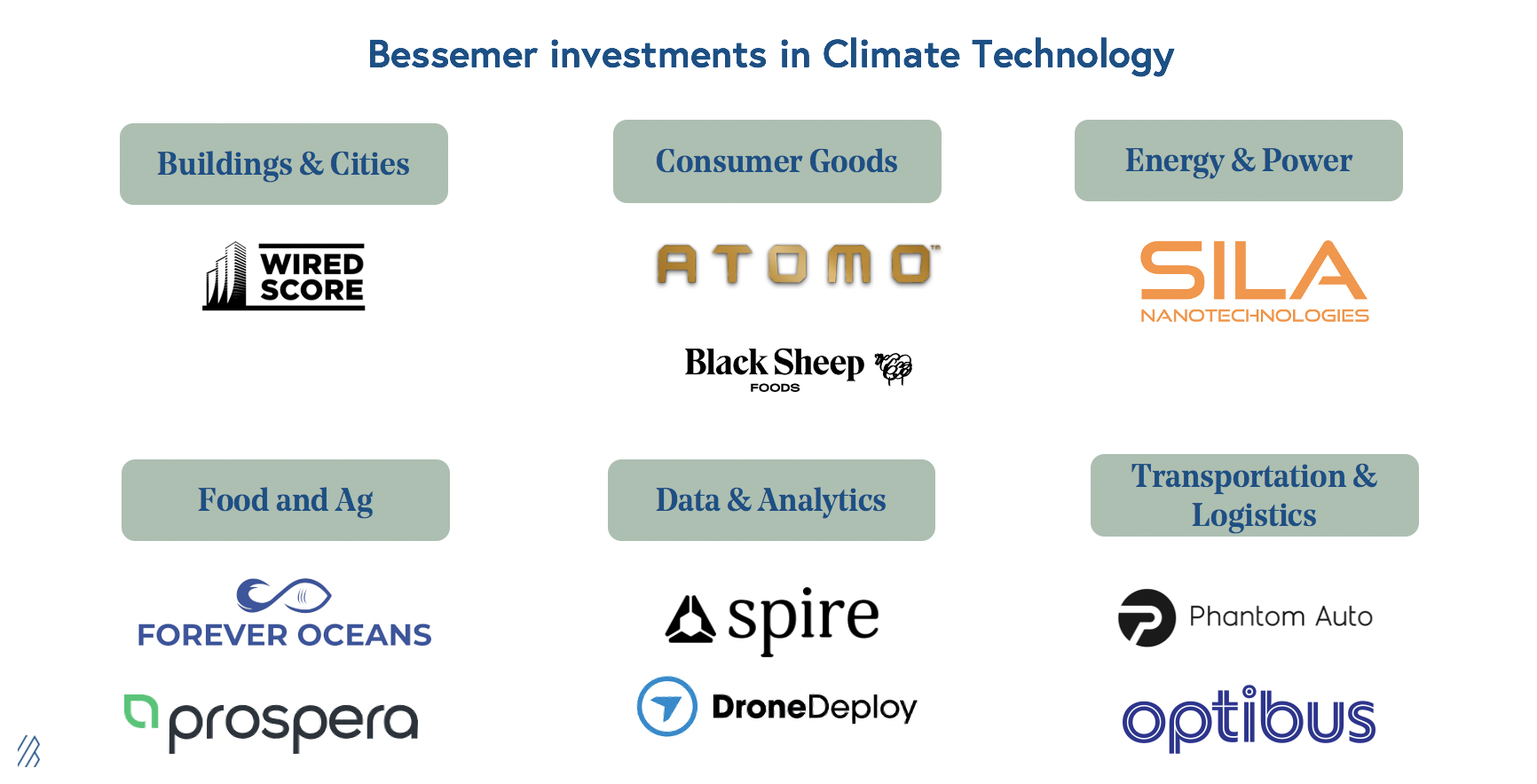 We’re optimistic that entrepreneurs can have a real impact on the future. While COP26 represents small steps and real progress towards a future of mitigating climate change, a wave of younger activists and optimists are emerging, hoping to do real work to achieve immediate and drastic emissions cuts. A new wave of entrepreneurs and operators are emerging and building new solutions for the climate crisis, including modern cloud-based software that will play an important role in enabling the transition to renewable energy and achieving a net-zero economy. These leaders will play critical roles in helping shift humanity towards a carbon-neutral future through software. 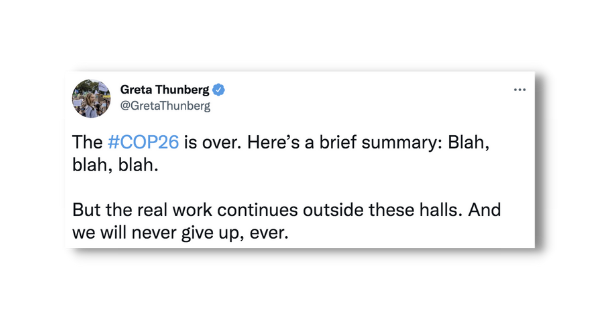 While waves of climate tech investing have passed with few success stories, we see four fundamentally new factors driving the current transition towards a carbon-neutral future.

Renewable assets like solar and wind have historically been unable to compete with their fossil fuel counterparts after accounting for vast subsidies. However, this has recently begun to change with the renewable grid beginning to reach parity with its prehistoric predecessor. From 2009 to 2019, the price of solar electricity dropped 89%; experts believe that within the next decade it will be more efficient to shut down coal plants and rebuild new solar farms versus running existing plants. As renewable costs relative to fossil fuel costs decrease, so too do the barriers to widespread renewable energy adoption. 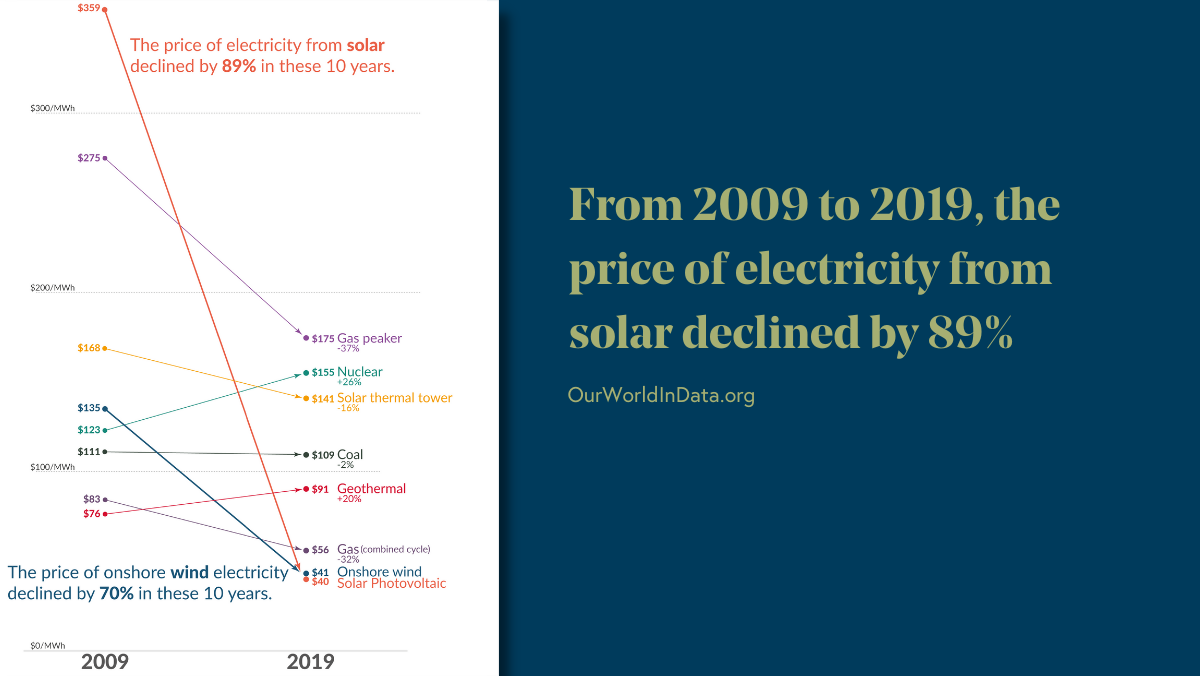 Source: Our World in Data

Escalating forest fires in Australia and California, unprecedented flooding in New York City and Europe, and countless other climate events over the last year have transformed climate change from a concept into a tangible threat and reality, impacting shopping behavior and people’s everyday lives. The average consumer/citizen has become increasingly aware of the ramifications of climate change and is increasingly demanding action from governments, employers, and the entities and brands they support.

Businesses, investors, and corporations are not only obligated to commit to clean energy initiatives and targets because of environmental regulations but also the court of public opinion and consumer expectations are holding them accountable.

When it comes to green consumerism, almost half of shoppers want brands to play their part in being more eco-friendly and 60% of internet users say they will pay more for products that are green.

New regulations, both already proposed or being discussed, are likely to drive dramatic shifts in the way governments hold businesses accountable for their energy usage. In the past, corporations have set carbon offset or sustainability targets as eco-friendly marketing angles without any real accountability for hitting those goals but are now thinking more critically about how to achieve their climate objectives. 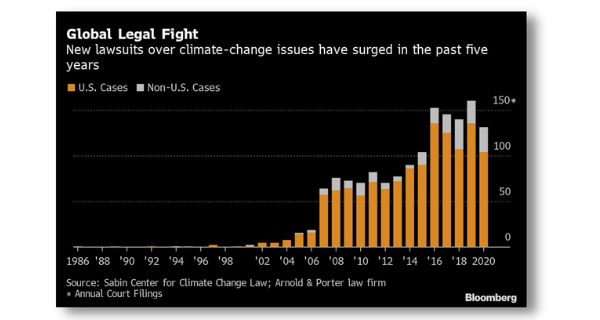 Climate related lawsuits have increased over ~100x in the past two decades.

Across the globe, regulatory changes and legal battles are forcing companies to set and achieve real climate targets. Earlier this year, the EU formalized their region’s GHG emissions targets as legally binding, setting in motion waves of subsequent policy across the continent and interest in investment from enterprises seeking to be compliant with the new regulation.

Investors have historically been averse to investing in climate tech since the first cleantech boom. A wave that began with enthusiasm and excitement by and large floundered as companies failed to achieve the technical and business milestones they set out to accomplish. However, capital-seeking climate innovation has never flown more freely than it is today and more climate funds have been raised over the past year than in the past five years combined according to data from Pitchbook. This momentum in financing is enabling more entrepreneurs to take bigger and bolder swings towards decarbonizing our economy. 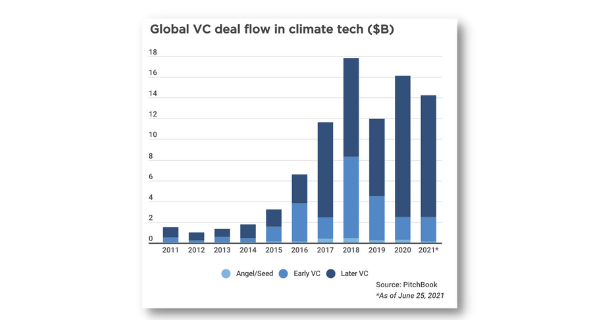 As this sector emerges, climate software will play a critical role in ushering in climate innovation and driving towards a net-zero economy becoming the next great category of enterprise software.

These four trends will unlock unprecedented innovation in climate technology for emerging entrepreneurs.

The path to market leadership can be found by first addressing a new or underserved market, as witnessed from over a decade of vertical software investing. As more renewables are deployed, software is needed to assist in installing, managing, and maintaining these assets.

There is no better example of this than Aurora Solar, which offers cloud-based software to solar design and installation companies. As the cost of solar drops and consumer demand for solar increases, the growing industry of solar designers and installers requires workflow software designed for their specific use case. Aurora has emerged as the market leader in this new and growing market and is paving the way for the next generation of new vertical software category leaders.

Beyond the core workflow software itself, there are a host of other products that can be layered onto this software, such as financial instruments such as payments and loans. TAMs can be rapidly expanded through these integrated services as we have seen with Toast, Shopify, Mindbody, and vertical SaaS giants, and we have no doubt that renewable energy will see the same trend. With new investors, industries, and users participating in a renewable energy economy, industry-specific, tailored software solutions will become essential to this transition and we feel confident that the next great vertical SaaS company will be built in climate tech.

Many enterprises, such as Microsoft and Apple, have ambitions to be carbon neutral by 2030—Amazon by 2040—despite their current ecosystems of suppliers and distributors that contribute to their footprint in some way. To date, analysts or sustainability officers have collected this information manually, begging coworkers to share data over email or hounding vendors for information that could give them any sense of emissions estimates. Even then, there is no agreed-upon standard for data collection.

There is a growing opportunity for software companies like Ecovadis, Interos, and Sourcemap to help facilitate this type of collection through online document collection and integration, which also benefits from supply chain network effects and virality as carbon tracking becomes standard practice. There is a dual purpose here of not only tracking emissions but also value in enabling them to have greater visibility across a company’s whole supply chain, which has become top of mind as the effects of COVID-related lockdowns reverberate.

Companies are more actively participating in the circular economy as they face increasing pressure to responsibly source, use, and ultimately dispose of materials and byproducts. This will create new opportunities for software companies to measure and connect various stakeholders across end-to-end supply chains, starting with sustainable sourcing solutions like Sourceful and CarbonChain, as well as waste management solutions, such as Circulor and Empower.

Enterprises have started setting more ambitious climate targets as consumers demand brands to be held accountable for emissions and regulators place increased scrutiny on environmental impact. Much like what happened with data privacy, regulators are following consumer sentiment and aiming to enforce stricter demands on companies. This has led to the emergence of Chief Sustainability Officers, similar to Chief Privacy Officers, who are responsible for tracking, managing, and mitigating their employer’s carbon footprint. In tandem, we are seeing growing demand for a new horizontal category of ESG accounting and compliance software. These products plug into various, disparate, generally legacy systems (such as ERPs) to show the exact carbon footprint that exists today. We believe that unlocking valuable ESG data can also lead to full-stack solutions or new applications that address data analytics and carbon offsetting.

Carbon accounting in particular has risen to become a category of its own, as the companies need better ways to measure and manage their environmental impact. Companies such Watershed, Plan A, Emitwise, and Normative, among others, have stepped up to the plate to help corporations calculate their emissions and track their carbon footprint. Reporting solutions are just the first step. Carbon offsetting—via API like Patch and Cloverly, through marketplaces like Pachama and NCX, and offset standardization by Sylvera—is becoming a critical action step for companies to reduce their footprints and hit their end of year targets.

Consumers are not just urging businesses to be more sustainable, but consciously seeking ways to lower their carbon footprint in their everyday lives. While it might seem futile for any one person to make an impact on such a massive problem by just turning off the lights, taking public transportation, or eating less meat, collective action can lead to massive outcomes. As a matter of fact, with luxury fashion houses, including Yves Saint Laurent, Gucci, and Alexander McQueen, going fur-free, eco-conscientiousness is not only the “right thing to do” but also on-trend.

A number of startups are hoping to harness that collective action by going directly to consumers and empowering them to take action. These include personal footprint and accountability solutions like Joro, Wren, and CoGo, as well as sustainable and ethically sourced consumer goods marketplaces like Wolf and Badger. We are seeing other companies that sell to businesses but power consumer products such as Ecolytiq in sustainable finance or EcoCart and CarbonCloud in green e-commerce.

Looking toward a greener future

Spurring collective action towards a net-zero economy is an uphill battle and there is much to be done to reverse the impact of decades of unsustainable energy consumption. We readily admit software will be just one part of that future, but we are incredibly optimistic about the future of green entrepreneurs in software. We are excited to work with founders transitioning humanity to a more sustainable future and hope you join us in that mission as well.

If you are building a company that you feel resonates with the themes described in this article, please email us at climate@bvp.com.