The rise of synthetic media

So much more than just “deep fakes”

Enterprises are following suit to embrace a synthetic reality

Why is a synthetic future manifesting now?

Roadmap: The rise of synthetic media

In the spirit of collaboration (a core value at Bessemer), our consumer and enterprise teams, across early-stage and growth, come together to explore a generative AI roadmap.

Many of us are familiar with the iconic song lyric “life in plastic, it’s fantastic.” But what about life in “synthetic”? At Bessemer, we believe we’re at the precipice of a new frontier where humans communicate, create, and consume content through the use of “synthetic media”—in other words, media that is created by or modified with the help of artificial intelligence (AI).

Consumers’ embrace of this technology has sparked an adoption flywheel now taking over widespread industries, opening up new B2C2B models that were previously unfathomable. In this roadmap, we answer four pressing questions:

So much more than just “deep fakes”

Synthetic media is a broad term encompassing data artificially-generated or modified by AI. Many individuals think of this as “deep fake” visual technology, but the range of synthetic content is much broader and can span across text, image, video, voice, and data with a wide range of applications.

While some might think that we are many years away from synthetic influences permeating our day-to-day lives, the reality is that we already are living in a world where we regularly interact with AI-generated content—whether we recognize it or not. Over the past year, we have observed a marked increase in consumers and businesses embracing AI-generated content, such as in the examples highlighted below. 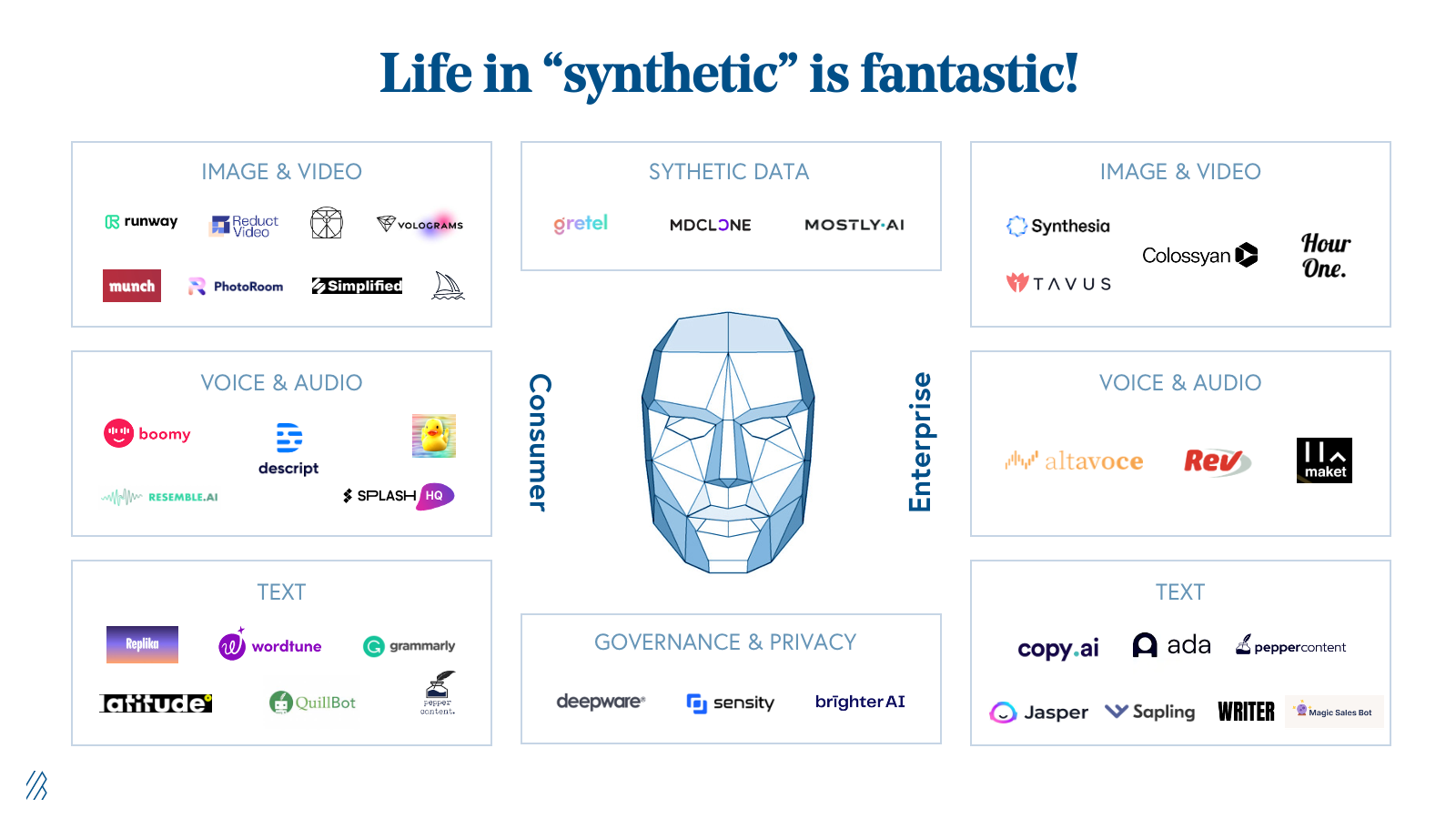 In the last decade, however, user-generated content (UGC) platforms emerged to democratize content creation and distribution. This shift has empowered individual creators, allowing them to produce captivating content faster and more cost effectively than before.

Today, we’re hooked on UGC platforms like TikTok, YouTube, and Roblox—in fact, the average consumer spends 2.5 hours on social media per day. Plus, there are 100 million daily active users (DAU) who spend 30 minutes per day on YouTube and 54 million DAU spend 2.5 hours per day on Roblox. Today’s netizens are both constantly surrounded by UGC and play an active role in creating it.

It’s human nature for people to crave new ways to communicate and create. As we look to the next frontier, AI is poised to play a central role in the creative process and has piqued significant consumer interest. But what exactly does this mean for consumers and creators? We break it down into two main categories: 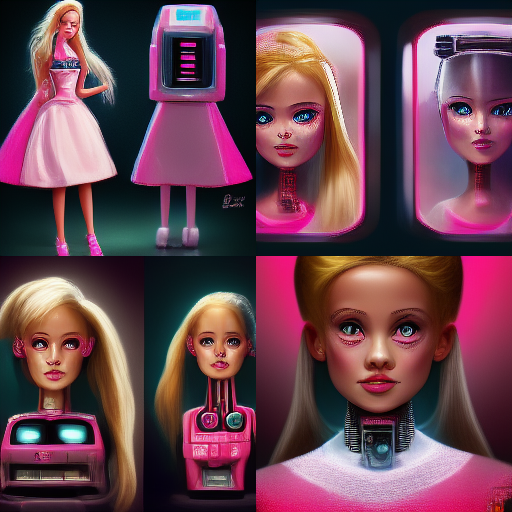 Breakthrough technologies in media often start with text and image before transitioning to other more complex mediums like video, audio, and AR/VR. Nowadays, content is rarely constrained to a single channel but rather spans several. Capitalizing on this phenomenon, Munch helps creators to quickly repurpose content across platforms. We believe the next frontier of media 3.0 is both multimodal and synthetic.

But it’s important to see how consumers ultimately wield influence and sit at the nexus of synthetic media innovation, driving early adoption and product direction. These consumer applications garnering millions of DAU are also unlocking new enterprise use cases by sharing access to their technology with strategic partners via APIs, kickstarting a B2C2B engagement flywheel.

Enterprises are following suit to embrace a synthetic reality

From social media to the gig economy, after consumer adoption is normalized, we often see enterprise adoption follow suit. We see the same pattern applied here with synthetic media. While consumer applications of synthetic media are more mature in depth and breadth, organizations are catching on to the power of this technology. Here are some examples of opportunity areas that have surfaced:

2. AI-copilots for sales: With the inability to host in-person conferences or sales pitch meetings during the pandemic lockdown, many employees adapted to a remote-first environment by creatively leveraging synthetic media in their “remote sales” toolkit. Examples include:

2. Virtual copywriters and moderators for marketing: We’ve noticed that agencies and marketing teams are often early advocates of new technology for companies. For example, marketing creatives were some of the first employees to embrace social media and “low-code/no-code” design tools for enterprise use. Synthetic media has proved to be no different:

3. AI augmented product development: Thanks to increasing awareness of product-led growth, many companies recognize that an outstanding proprietary product is critical in winning and retaining customers. As such, they spare no expense in ensuring product and engineering teams are equipped with the best tools to build exceptional products. We’ve witnessed how synthetic media is supercharging product and engineering teams across key workflows in the product development process, such as by:

4. AI-enhanced voice and chatbots for customer support: Today we know that customer success is key to company success. As a result, customer success functions are seen as “revenue-generating” rather than simply being a “cost center,” and many organizations have sought out cutting-edge synthetic media solutions to bolster the effectiveness of their support teams. Some examples include:

5. Synthetic data for research and development: In many research and development environments, it takes a significant amount of data to run tests and train models. This challenge is more pronounced in industries such as biotech and healthcare, where there is added sensitivity around the protection and safety of patient data, or in frontier technology, where real-world sources may not be readily available. This limits the speed and scale of research in such verticals.

While adoption of synthetic media within the enterprise segment is in its early days, we believe that this technology has the potential to permeate all facets of an organization—including divisions traditionally untouched by AI—as companies seek to improve efficiency and quality of their creative and interactive processes.

Why is a synthetic future manifesting now?

There are a number of reasons—chief among them:

1. Technological progression: In the past several years, significant academic advancements in deep learning, particularly in the realms of generative adversarial networks (GANs) and diffusion modeling, have helped to fuel significant quality improvements in AI-generated media. With this baseline level of quality in place, the real-world applications of generative AI have proliferated. (For a closer look into these progression milestones, check out our research on “Is AI generation the next platform shift?” and “The evolution of machine learning infrastructure.”) 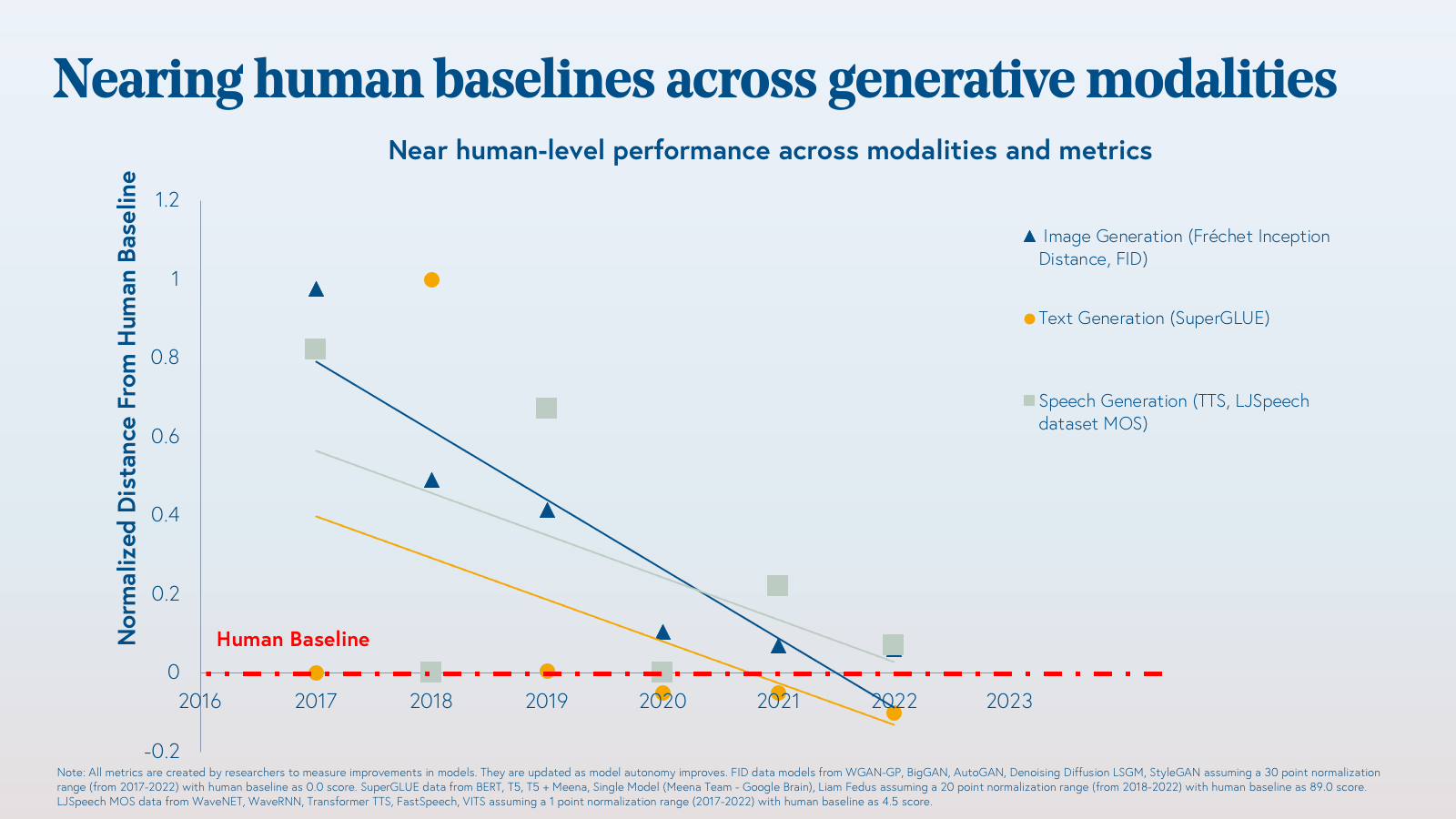 2. Democratization of AI research: Adoption of synthetic media has been further catalyzed by the open-sourcing of AI research and models through organizations such as OpenAI and EleutherAI. Recently, several startups as well as tech giants have followed suit, including Cohere.ai with the launch of their non-profit labs Cohere for AI, Hugging Face with the launch of its BigScience initiative, and Meta releasing OPT-175B, a 175B parameter AI language model. We cover the timeline of activity in our deep dive here. 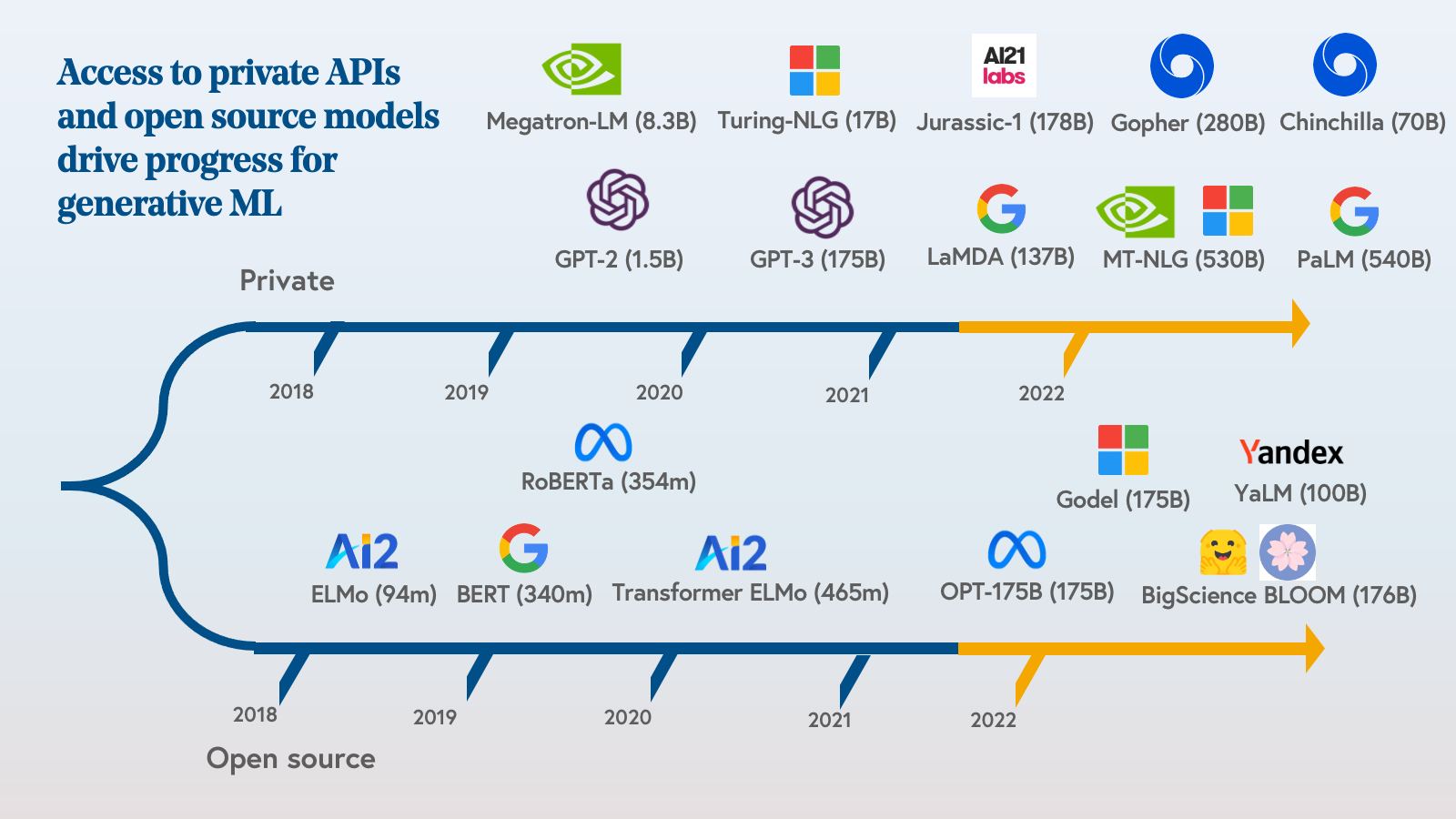 This increased accessibility and open flow of knowledge has enabled the formation of a burgeoning AI startup ecosystem. For instance, in the nine months since OpenAI launched its API for GPT-3, more than 300 applications have built freely upon this technology, with over tens of thousands of developers around the world producing 4.5 billion words per day.

3. An inflection point for consumer access: Open-source organizations pioneering advancements in artificial intelligence research are starting to grant early access to consumers as the initial go-to-market strategy, rather than prioritizing access to enterprises.

For example, while OpenAI previously leveraged a freemium business model geared toward enterprises for its GPT-3 and Codex APIs, its DALL-E 2 was built for and launched with a small subset (~2K) of consumer beta testers. This is valuable not only because consumers provide early feedback as part of product development but also because they get first-hand exposure to the capabilities of AI applications. We’re excited that consumers have a front-row seat to the emerging opportunities in generative image-based media, even before future business access is disseminated. 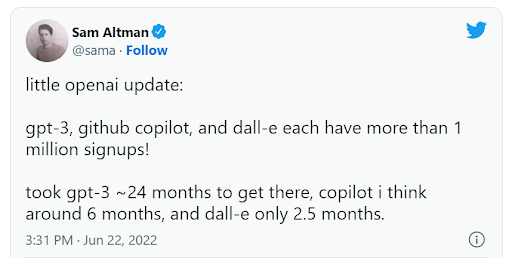 4. COVID-19 pandemic: The pandemic period has been a watershed moment for accelerated digital transformation as individuals and enterprises looked for solutions to adapt to the challenges and restrictions imposed during the pandemic. As we highlighted above, synthetic media has certainly benefited from these tailwinds. Unlike some remote work solutions such as virtual conferencing platforms, the effectiveness of synthetic media applications is so pronounced that even as offices re-opened, many individuals and teams continued to leverage synthetic media to improve their work productivity and efficiency.

The rise of a synthetic future will no doubt usher in fundamental changes to our current infrastructure around areas such as licensing and verification. While we believe in the positive impact generative AI can bring, we also recognize that there is potential for misuse and abuse. We applaud companies, such as Sensity, Deepware, and BrighterAI, that focus on detecting malicious synthetic media or ensuring privacy protection in a synthetic future. We anticipate that this will be a burgeoning cybersecurity category as synthetic media adoption increases and we are actively seeking out startups that are building in this area.

Open-source AI research labs are intentionally building language and image models that serve a variety of use cases. Which leaves open questions about where value will accrue in this new value chain in which users contribute to AI models as compared to prior media generations. For instance, what specific applications will attract the most users and garner the most engagement? What tools will become essential rather than nice-to-have? What companies hold the potential to become platforms beyond their initial use case?

While many questions remain, we’re confident about one thing: in the next five years, AI creation will spread across all types of media. Maybe Aqua will even have to update the lyrics to their song—“life in synthetic, it’s fantastic.” (We’ll workshop that).

That’s our take—now, we want to hear from you. What parts of a synthetic future are you most excited about? Are you building toward a positive synthetic world? What did we miss? If you are a consumer-focused or early-stage team building in this space, please reach out to Talia Goldberg and Kate Walker. For enterprise-focused or growth-stage startups, please reach out to Elliott Robinson and Janelle Teng.