Cloud globalization and other cloud trends

With dollars raised and valuations at a historic high, the cloud industry represents a source of economic opportunity across every industry.

With one of the largest cloud portfolios in venture capital, Bessemer Venture Partners has a unique vantage point to supporting and witnessing the rise of new technology, business models, and founders playing a pivotal role in shifting entire industries into the cloud economy. Powered by cloud technology itself, we’re seeing generational shifts in both established and emerging markets when it comes to opportunities for cross-border collaboration, communication, and the ability to scale world-class remote teams from just about anywhere.

Accelerated by the global pandemic, society has experienced one of the most challenging periods in recent memory, but also one that has seen unprecedented innovation. Entrepreneurship is gaining momentum around the globe as VC investments hit record levels in the first half of 2021: with more than $288 billion dollars raised, half of the venture capital dollars went to startups based outside of the United States. 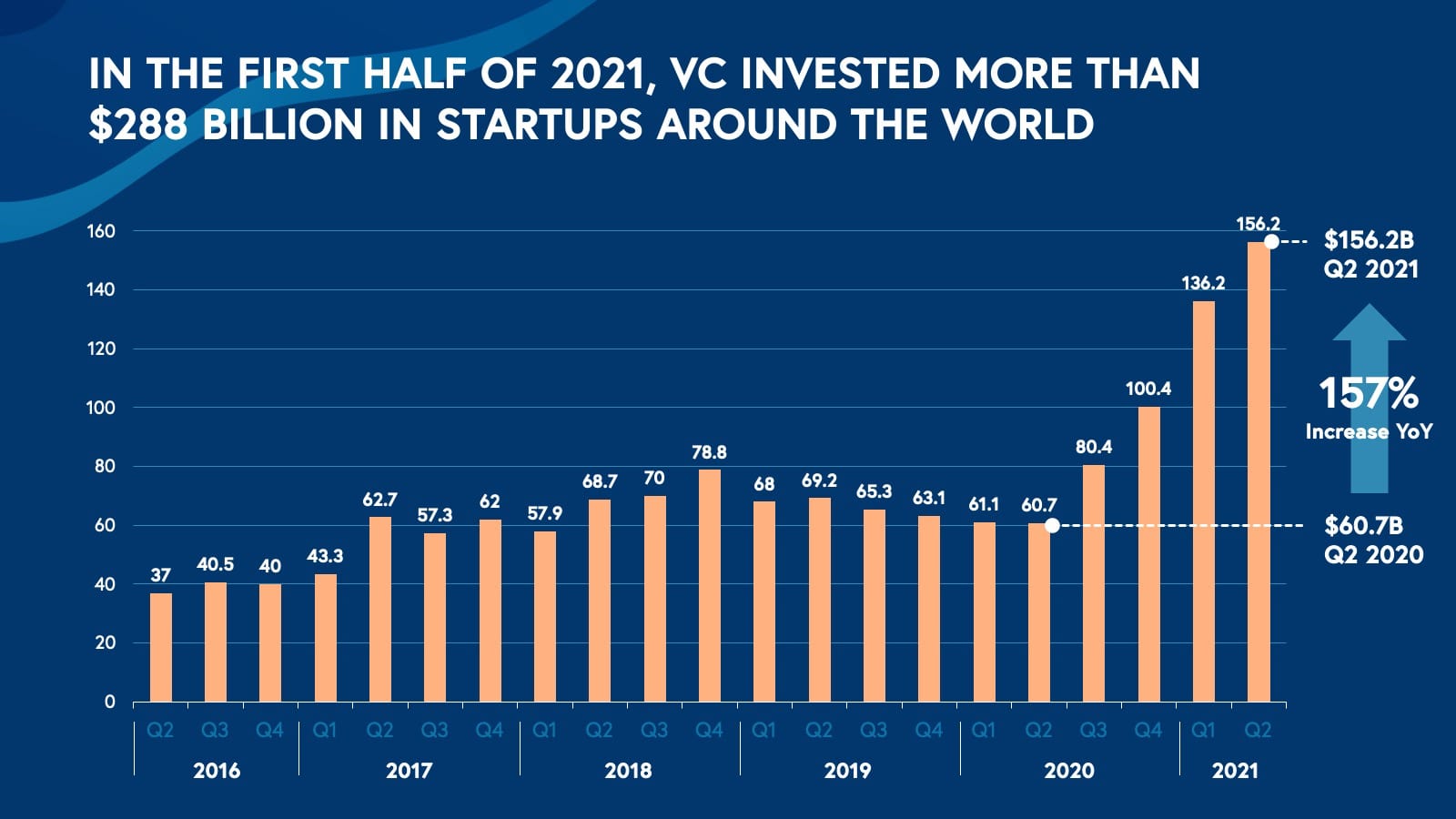 The spirit of “Silicon Valley’’ can be found anywhere that a founder decides to build and the Cloud serves as the backbone for the new emerging tech communities across the globe as startup teams have more flexibility and agency than ever before.

The tech sector continues to drive value and wealth creation in the broader global economy, and the cloud represents a source of economic opportunity across almost every industry you can think of.

Since January, Cloud 100 companies grew their employee ranks by a net average of 26% — that translates to a total of more than 17,000 new hires. And it’s probably no surprise to learn that after the Fintech sector raised a record $33.7 billion dollars from venture capitalists in Q2 alone, Fintech companies on the Cloud 100 list also created the greatest number of new jobs this year to date.

Compared to 2020, U.S. workers are feeling more confident than ever to try for new opportunities; economists say this signals a healthy labor market as people gravitate to jobs more suited to their skills, interests, and personal lives. And as employees seek values-driven, supportive, and flexible organizations, leaders are responding in kind. Guild Education, co-founded by CEO Rachel Carlson, recently opened a daycare center for their employees. By better catering to working parents, Guild has maintained a 96% retention rate amongst parents during the pandemic and set an example for great leadership. In today’s environment, being values-driven and values-led matters more than ever.

According to reports, 80% of workers also say they want business leaders to speak up on social and political issues and think companies can do more when it comes to diversity, equity, and inclusion. But it’s not about furthering diversity theater or promoting empty pledges and public statements. It’s about turning your values into tangible, measurable actions that drive exponential impact and generate superior business outcomes. All of this is exemplified through the culture and products that you build, how you treat your customers and employees, and ultimately who you empower to be the leaders within your organization.

Plus, as the cloud economy taps further into talent pools from all over the globe, companies need to rethink and retool their Human Resources technology stack. For example, companies like Papaya Global help businesses navigate the complexity of a rapidly evolving remote workforce to more effectively manage international taxes, payroll, and benefits across one unified platform.

And thanks to the rise of low or no-code solutions, our capacity at work continues to expand. Anyone can collaborate on building beautiful designs with Canva and Figma. And in a few clicks, Zapier, Workato and Monday.com can turn routines into automated processes, helping people do their jobs more efficiently.

We also saw the promises of the work from anywhere movement come to life as vertical software giants such as Procore, ServiceTitan, and Toast demonstrate that the power of the cloud is not only found in what we think of as the more traditional work environments but also for all professionals — from construction to plumbing, landscaping, restaurants and beyond.

When we compare this year’s Cloud 100 to previous years — we’ve never seen such dramatic change. Companies from the Cloud 100 continue to achieve fantastic success via both large acquisitions and record-breaking IPOs. 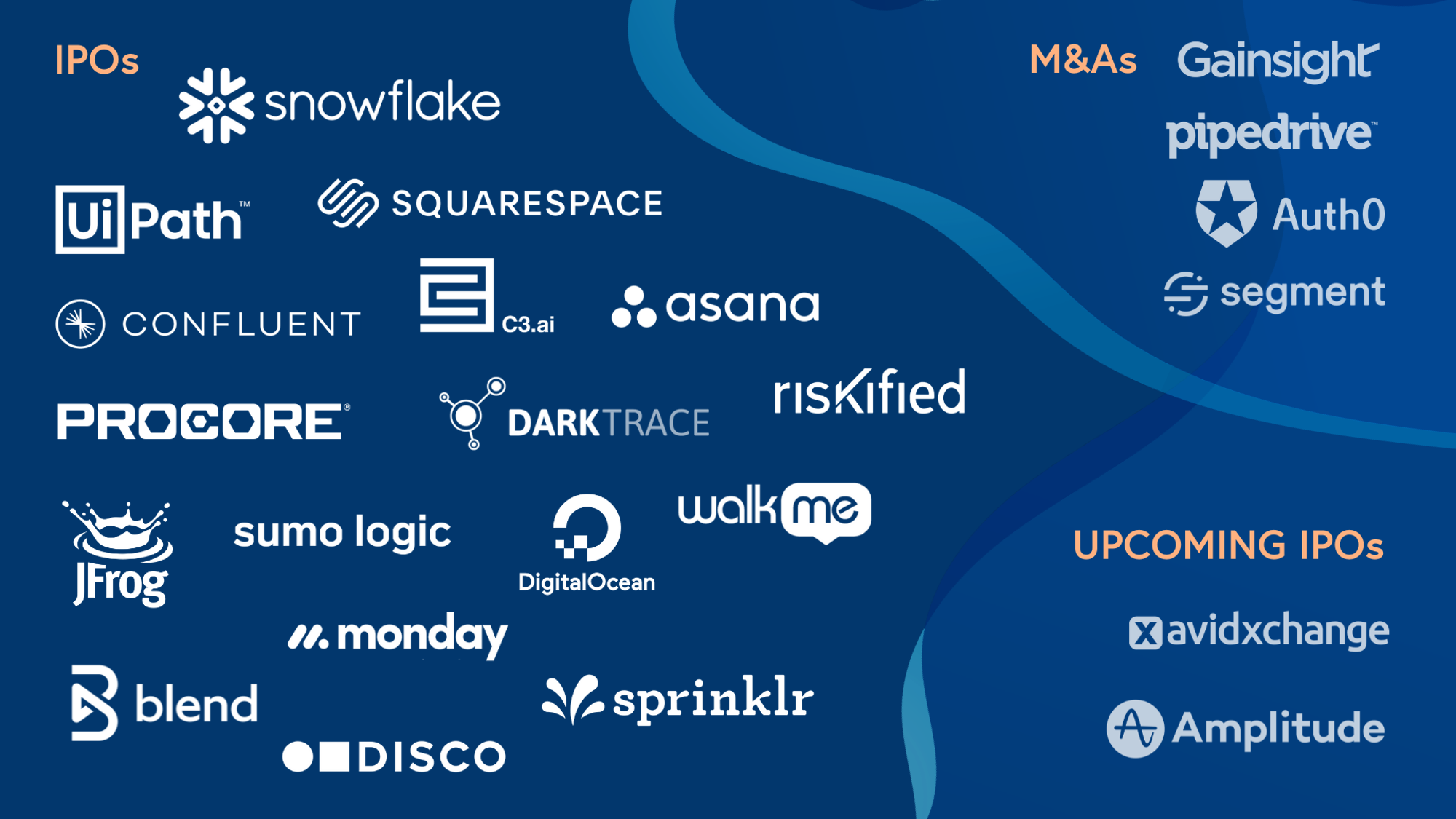 As you may recall, Snowflake, which earned the #1 spot in the 2020 cloud 100 rankings, went public just moments after Forbes revealed the list, making it not only the largest cloud IPO in history, but the largest IPO in the entire history of software. And since last year’s event, we’ve seen more than 20 — and counting — Cloud 100 Honorees graduate from this prestigious list, including companies such as Procore, UiPath, Auth0, Disco, Segment, Digital Ocean, Gainsight, and many more.

This time last year, we saw historic rates of digital transformation as companies rapidly transitioned to the cloud as a necessity. After all, it is even harder to work with legacy on-premise software if no one’s on-premise.

But we continue to see these trends further accelerate because one thing is clear — cloud is not a fad; it’s a business imperative. Your employees and customers demand it, and increasingly cloud is a necessity to survive and compete in our digital ecosystems.

Even further accelerated by the global pandemic, our digital economy is going through this historic period of “replatforming.” Cloud continues to be the growth driver of the tech economy and it’s no coincidence that the companies with the largest market cap — Microsoft, Amazon, Google/Alphabet, and even Alibaba — are not only worldwide tech giants, but also have multi-billion dollar cloud business units within them. 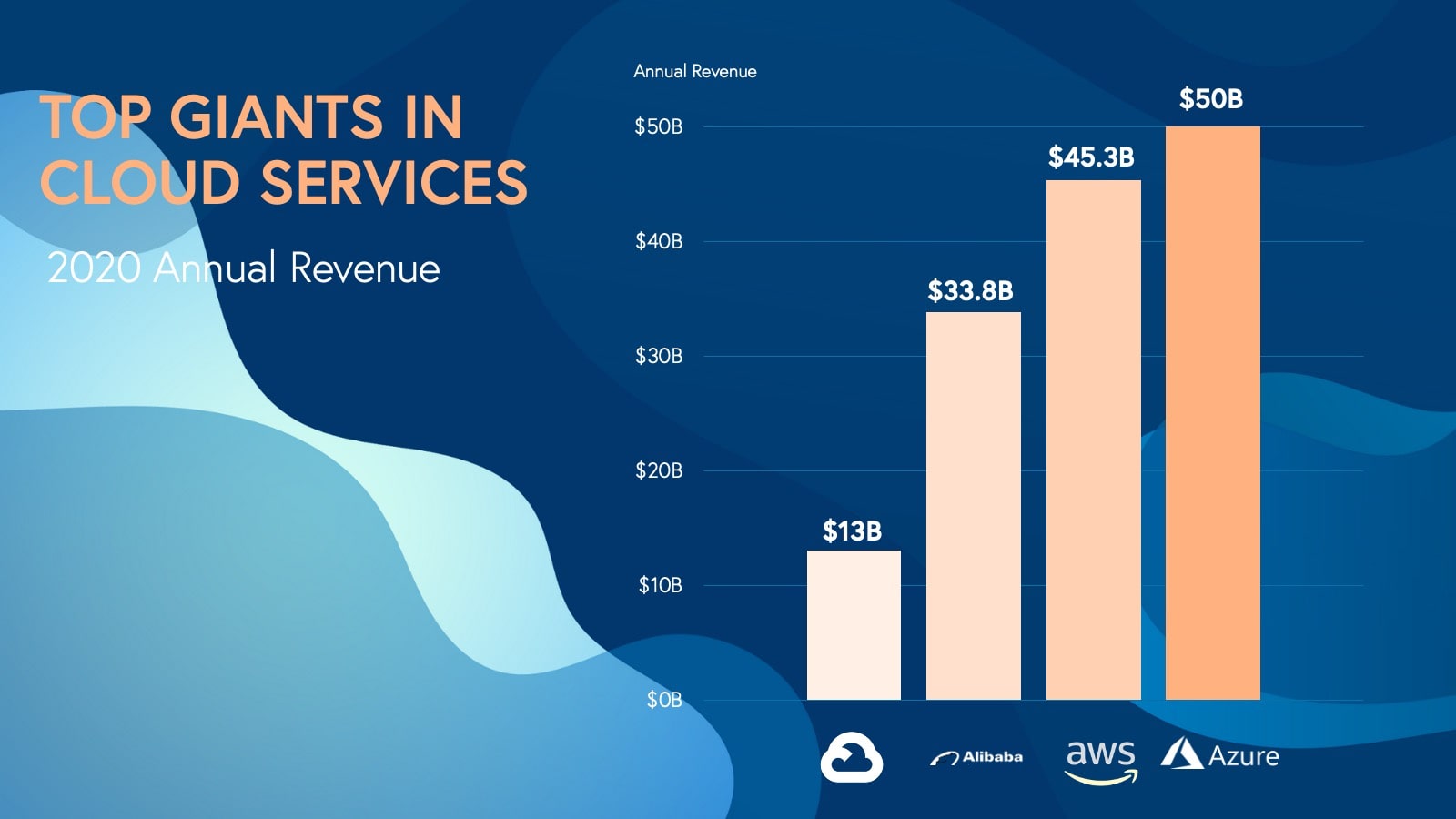 For years, investors talked about the internet revolution and the emergence of Facebook, Apple, Amazon, Netflix, and Google as the flag bearers of the new economy. But as the trends of internet and mobile mature, there is a changing of the guard underway. 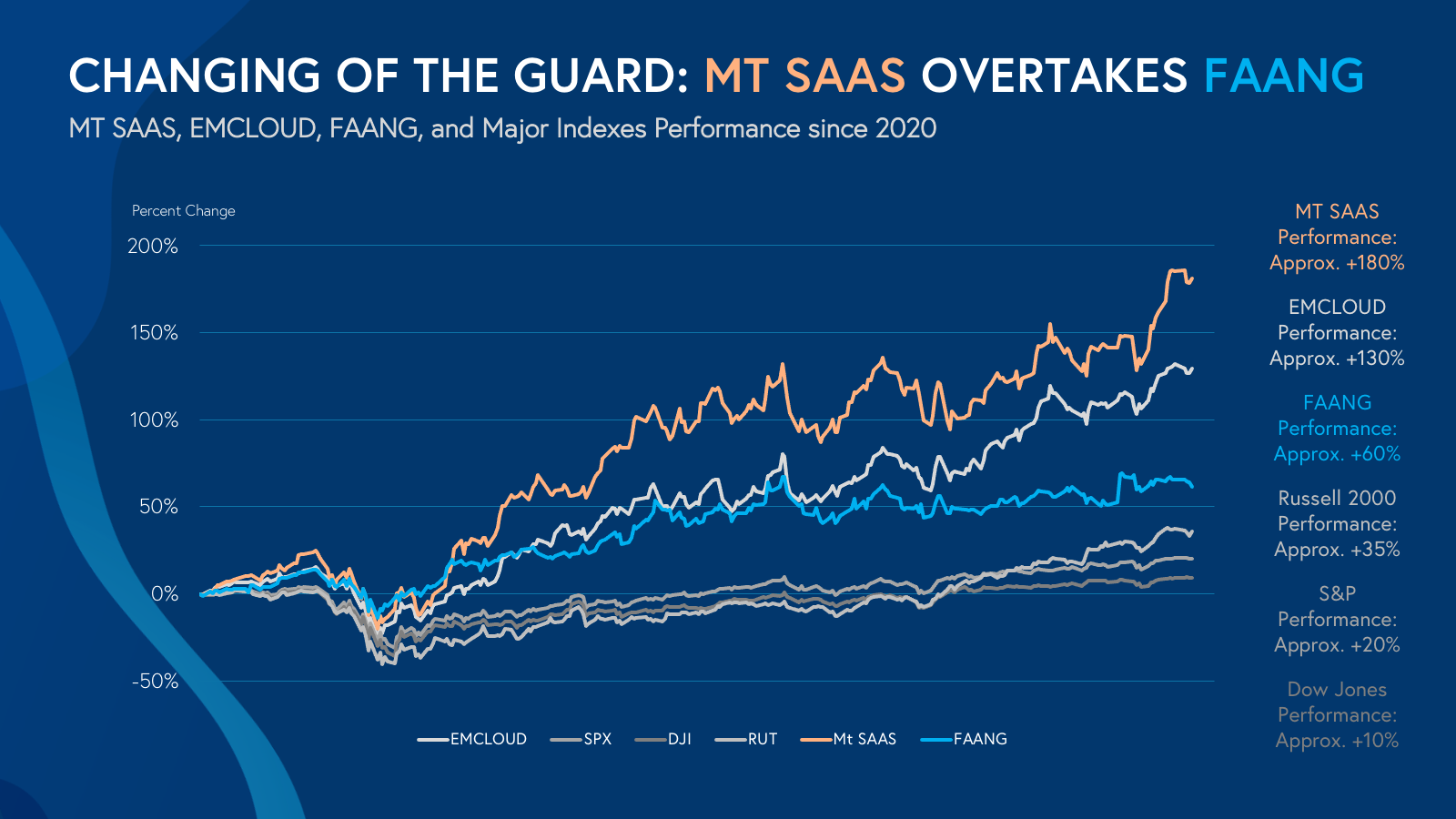 What MT SAAS illustrates is the power of the cloud and how it will continue to drive technology and innovation forward.

Simply put, cloud computing is increasingly consuming software, hardware, AND services — and is, therefore, the most exciting mega-trend in technology, making it one of the most compelling themes impacting global GDP over the coming years.

Last year, at Cloud 100 we made two predictions. First, we predicted that the public cloud markets would surpass $2 trillion in market capitalization. 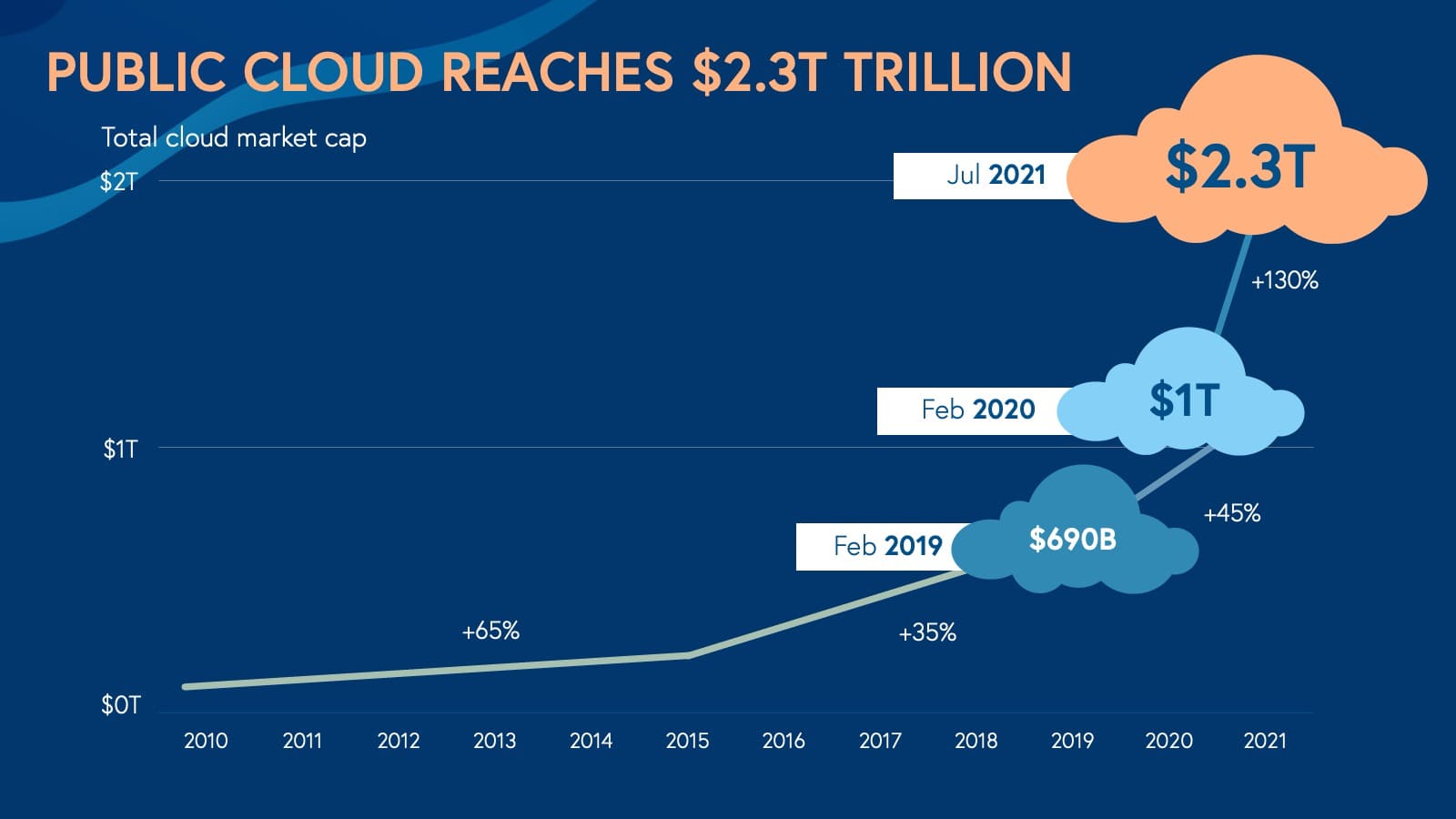 Our second prediction had to do with valuations. In 2020, 87% of the Cloud 100 was made up of unicorns. Well, we’re excited to announce that in 2021, we’ve crossed a new milestone: Every single company on the Cloud 100 has a billion-dollar-plus valuation — we even see a few emerging decacorns on the top-ten list.

When we created the first list seven years ago this milestone seemed inconceivable, and yet today we had to leave dozens of unicorns off the list because there are just too many in this awesome global cloud community. 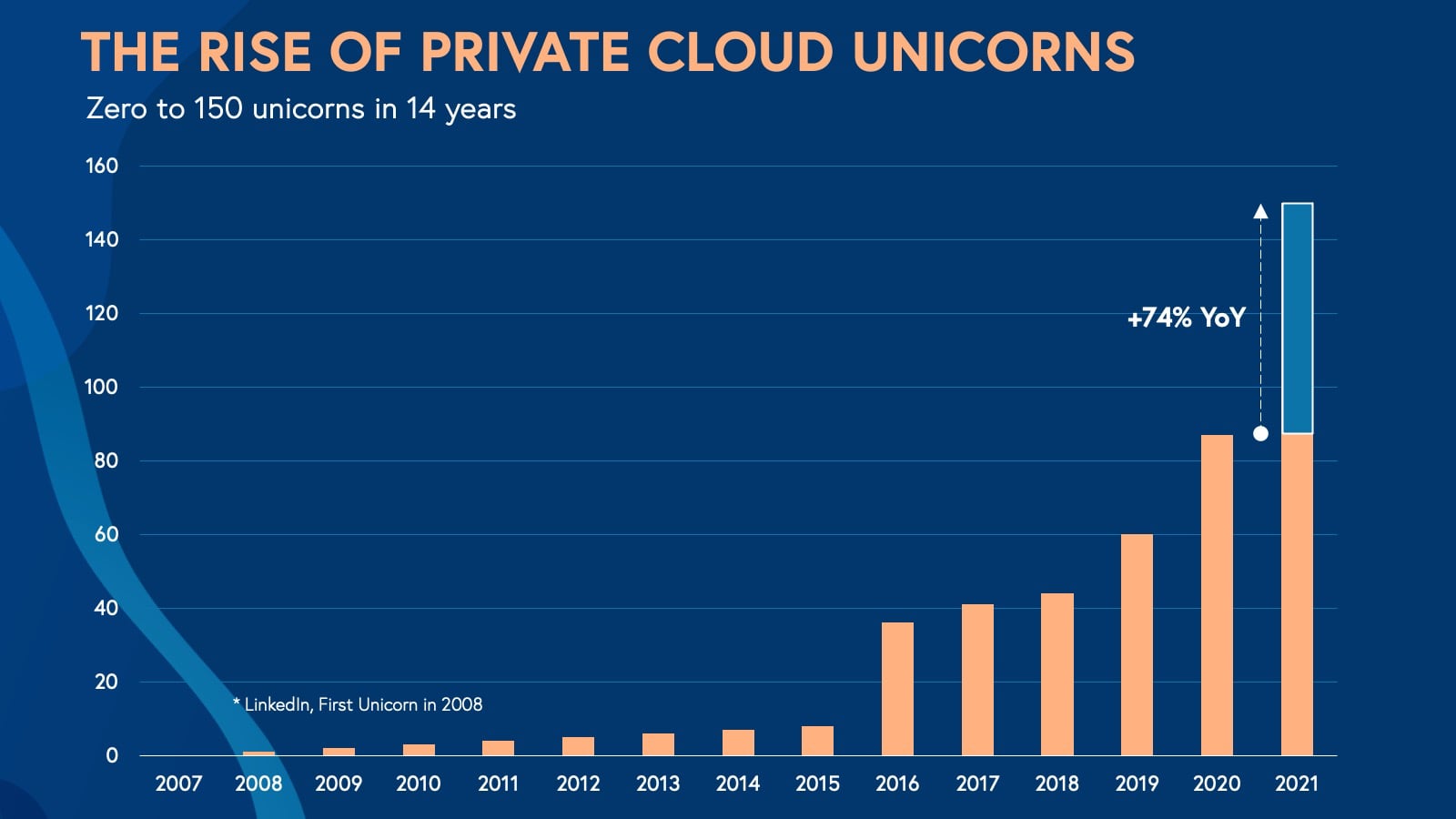 While there are thousands of amazing cloud companies worthy of potential inclusion and over 150 of them are cloud unicorns, yet our judges could only pick 100. The number of private cloud unicorns grew 74% year over year. Considering there were zero private cloud unicorns 15 years ago (the first one being LinkedIn in 2008), it’s clear how the compounding power of the cloud model is growing at an impressive clip.

Private cloud valuations are getting bigger and bigger as the market’s appetite for cloud continues to grow. Over the past six years, the average Cloud 100 valuation has grown by a tremendous 5.2x, from $1 billion in 2016 to $5.2 billion in 2021. And when we compare last year’s average Cloud 100 valuation — which stood at $2.7 billion — that number has nearly doubled in 12 months. 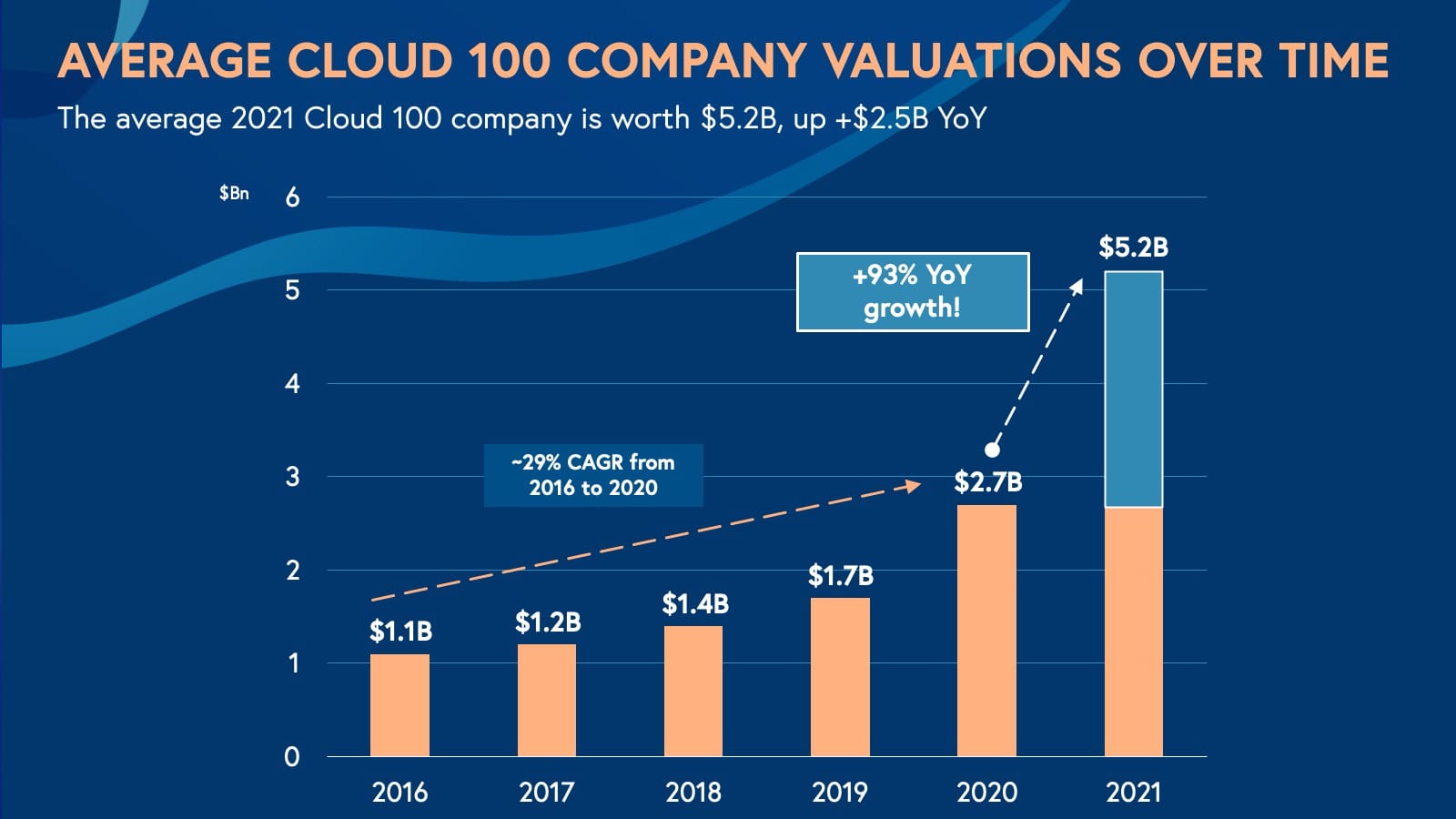 Together the cumulative value of the Cloud 100 in 2021 totals an impressive $518 billion — again, almost a complete double in a year with a 94% YoY increase. 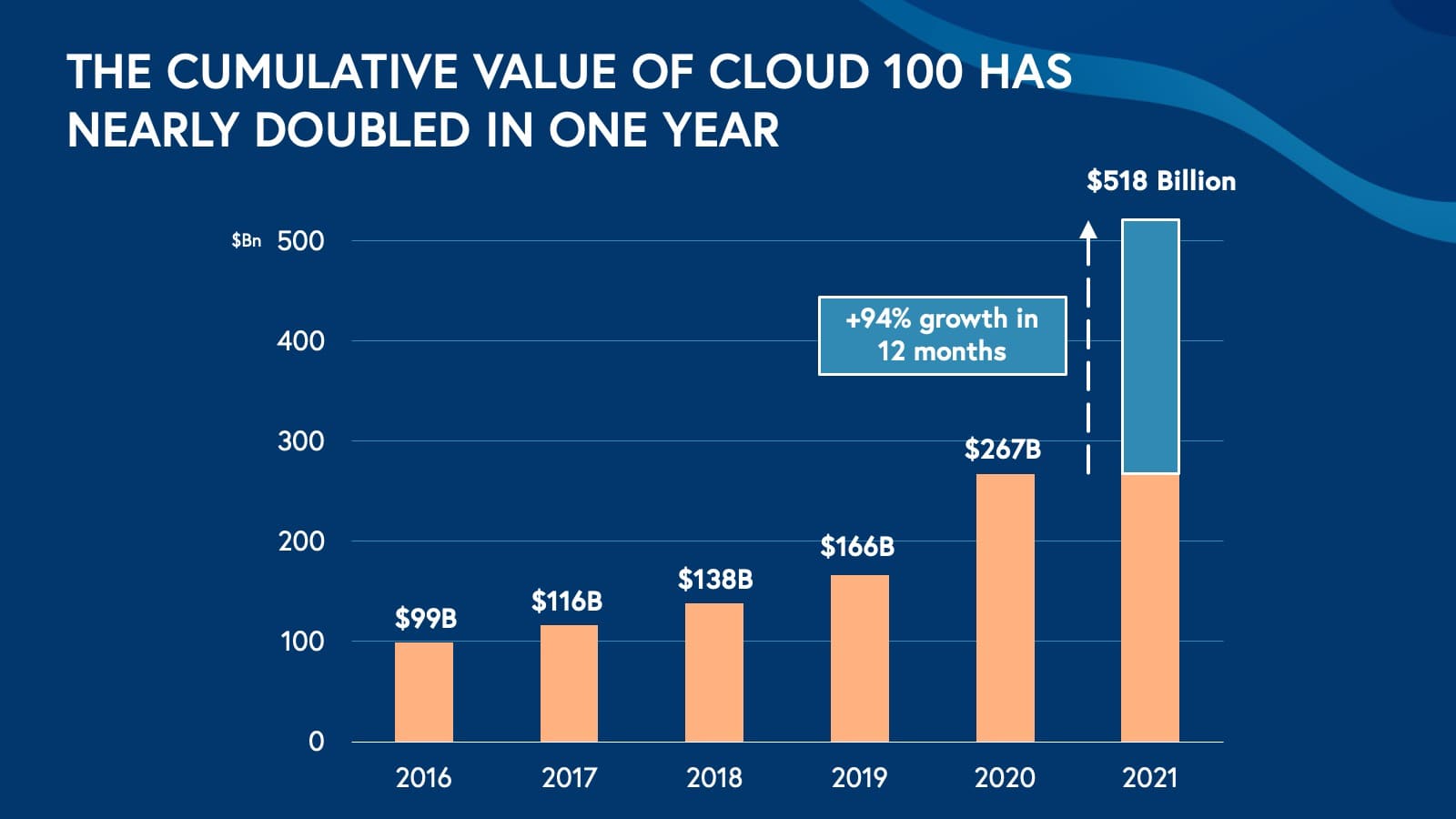 Dive into The Cloud 100 Benchmarks Report for 2021

As we reflect on how far the cloud economy has come and where it’s headed, it’s amazing to see that today’s Cloud 100, the definitive ranking of private cloud companies, has a cumulative value worth more than what the public cloud markets were valued just a few years ago. So for investors and founders alike, building a cloud business today is as valuable as it has ever been before.

And very different from just a few years ago, we’re seeing more and more of the most exciting cloud businesses being built outside the traditional Silicon Valley zip codes.

Cloud globalization is a macrotrend. As an example, in the first half of this year, venture funding to startups in Europe totaled an unprecedented $59 billion.

We’ve seen firsthand how innovation really has no boundaries — companies such as Stripe and Intercom in Ireland, Contentful in Germany, Papaya and Snyk in Israel, and Canva and CultureAmp in Australia have proven that the cloud ecosystem is thriving everywhere. And with technical talent all over the world, we continue to see mega-giants rising out of Asia Pacific, India, and other international markets.

The cloud will have a sizable impact on global GDP in the next few years. But the footprint of the private cloud market now rivals some of the world’s biggest economies. This year’s Cloud 100 companies have a greater cumulative total value than the individual gross domestic product of 87 percent of countries on the planet.

The cloud universe is expanding in terms of geography as well as the industries they serve. Cloud 100 Honorees span more than ten different sub-sectors, including vertical software, enterprise automation, collaboration, productivity, and several more.

On the list this year, we’ve seen the most growth in the number of Fintech startups — totaling a cumulative $146 billion total valuation, which makes up more than a quarter of the Cloud 100’s cumulative value. In second place: data and infrastructure businesses make up an impressive $63 billion. 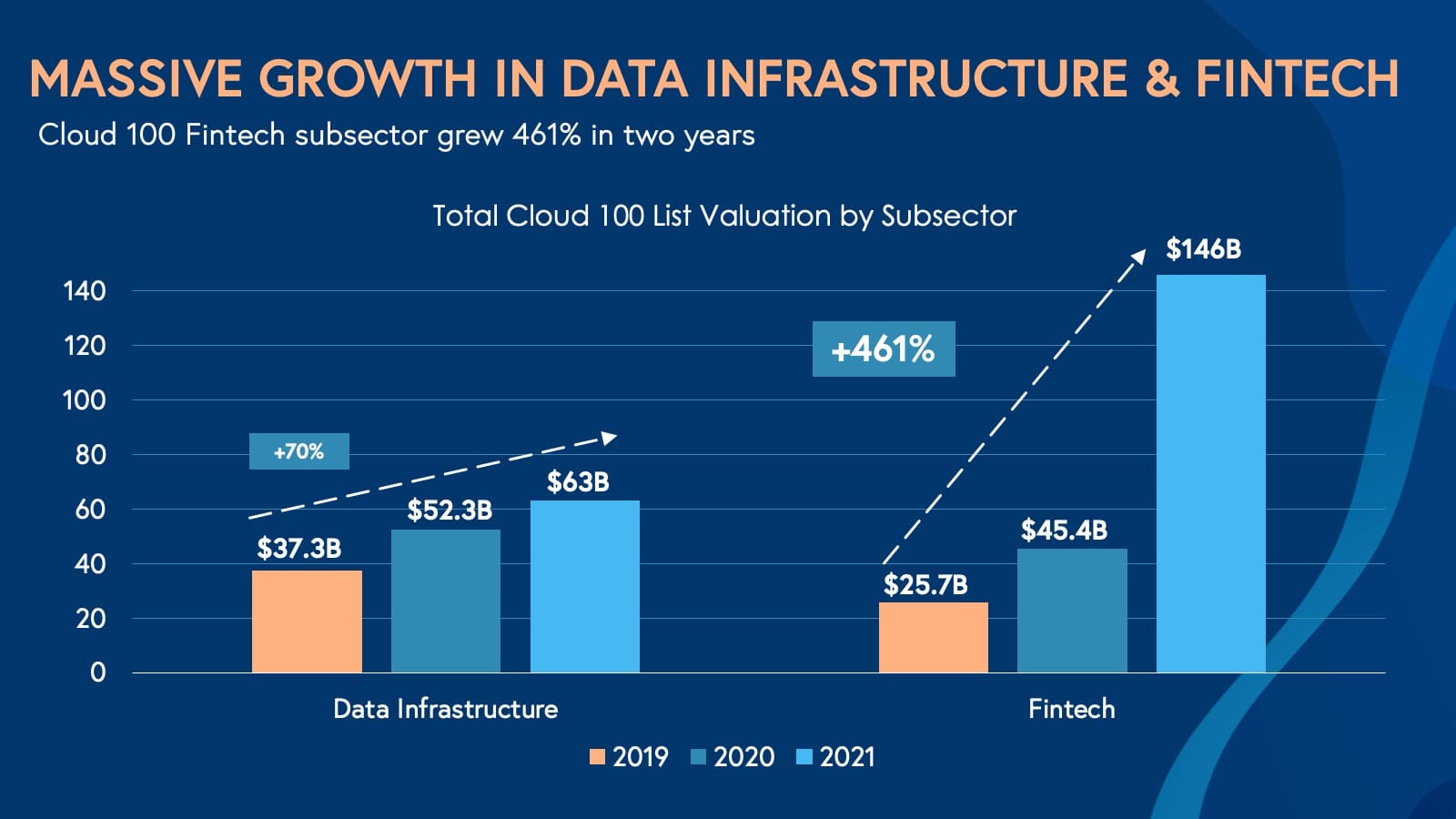 As financial services infrastructure is being rebuilt and redesigned for the modern world, we’re seeing similar transformations happen within the cloud data stack, as a wave of startups — like Databricks, FiveTran, DataRobot, BigID, and Firebolt — offer better and easier-to-use infrastructure for accessing, analyzing, and furthering the use of data.

The reason why cloud companies continue to grow in value is that they continue to deliver larger portions of the tech stack to their customers. For example, Vertical Software and Fintech are increasingly converging as leaders — such as ServiceTitan, Procore, and Toast — shift entire industries onto the cloud and embedded fintech solutions. Essentially, Vertical SaaS giants now process payments and payroll more efficiently and provide capital and credit on better terms for their customers than many traditional banks.

This has led to a new crop of companies that are embedding financial services and payments directly into their applications as software and fintech come together. This impact is also seen through the B2B payment landscape as well, with companies like AirWallex, Melio, and Razorpay leading the way.

We believe cloud will become a majority of all software very shortly, and help us all reimagine entire industries such as healthcare, automotive, gaming and entertainment. We continue to see how the cloud is forging the infrastructure of tomorrow’s digital economy and driving innovation for future generations.

The Cloud 100 is not just a recognition of where the industry is headed, but a celebration of the new guard of cloud giants that will set the pace of innovation and define their respective categories for years to come.